A New Revolution in the Middle East

No region of the world is more immersed in the consequences of global climate change than the Middle East. The region accounts for about 30 percent of global oil production, and oil revenues drive government revenues in the region—either because the countries produce oil, or because the countries produce a labor force that works in oil-exporting countries and sends money home. Because of oil revenues, Middle Eastern governments can afford to employ large percentages of their own populations, and they do. As the world turns away from oil as an energy source, the economics of the Middle East will change profoundly.

At the same time, the Middle East is subject to the consequences of climate change. The region is already desperately water poor—nine of the ten most water-poor countries are in the Middle East. Drought is pushing farmers off their land, the region’s many coastal cities are threatened by sea level rise, and rising summer temperatures increasingly combine with humidity to put human survival at risk.

While there is a lot we don’t understand, one of the important issues is pacing. To hear some people describe it, the global energy transition is nigh. Widespread awareness of climate change has galvanized consumers and governments alike to get serious about abandoning hydrocarbons. The financial world has read the new sentiment and pivoted away from oil and gas. Investors are now pouring billions into renewables, and China sees renewable energy as a national security imperative. Soon, oil production will outstrip demand, and as prices fall, producers will produce even more to make up for lower volumes, suppressing prices still further. Oil prices are going to drop off a cliff.

An alternative view is that the energy transition will take decades, and the built infrastructure to consume hydrocarbons ensures a robust market for many years. While electric cars get attention, gas-fueled vehicles still make up approximately 90 percent of new car sales, and charging infrastructure is still billions of dollars and decades away. Existing homes have gas furnaces and gas stoves, and they last decades. Virtually all of the world’s jet fuel is petroleum based, and the world is becoming ever more reliant on plastics, which are derived from oil. That is to say nothing of the developing world, where most of the world’s population lives, and which often operates on smaller economic margins than wealthier nations. These countries’ consumption is rising sharply as incomes increase, and they are likely to rely on existing equipment and technology for longer. While the wealthy can spend thousands on green products, for much of the world’s population, oil and gas will remain the affordable and available fuels.

There are reasonable arguments for both of these views, and no one can say with any certainty how technology, regulation, or consumer behavior will unfold. For the Middle East, which scenario comes closer to fruition is of profound importance. As suggested above, the region’s economies are tied to oil revenues. The world’s strategic attention to the region is also contingent on energy production. Religion and tourism will keep the region in the public’s mind, but for governments, the region’s irreducible significance is a product of global energy markets.

The idea that oil prices will drop off a cliff is predicated on the notion that oil is a market, and even small imbalances have large economic consequences. Today, global oil consumption is approximately 100 million barrels/day, and the system has relatively little capacity to produce more. When consumption threatened to outstrip supply in 2008, oil reached $140/barrel. When the Covid-19 pandemic suppressed demand in the spring of 2020, the world began to run out of storage, and oil prices plunged. Saudi Arabia took the biggest hit, cutting production by about 20 percent while prices still dropped below $30/barrel, less than half of their previous level. It took more than six months of reduced global oil production to work through the oversupply.

But Middle Eastern governments may not be willing to cut their own production. A sustained drop in global consumption, however small, would pressure Gulf countries to boost production in an effort to drive higher-cost producers out of the market and ensure that they are not left with even lower-value barrels in the ground when consumption drops still further. A battle between constraining production and securing market share partly explains the spat over production in July 2021 between Saudi Arabia and the United Arab Emirates (UAE).

Governments throughout the Middle East have been preparing for a post-oil world for years, but they remain far from their targets. In the Gulf states, the transition from high-productivity, low-wage workers subsidizing the efforts of low-productivity, high-wage workers will take years. Private sectors strain to provide jobs for new entrants to the workforce, and youth unemployment tops 30 percent in many countries. Youth alienation is a problem every government is considering in the decade since the Arab uprisings. It is a problem no government is convinced it has under firm control.

And the energy transition will matter for more than just the Middle East. Energy security drives much of China’s recent investment in the region. If the Chinese government decides that its energy security derives from mines in Africa and not wells in the Middle East, we should expect Chinese attention and capital to shift. If there is a more enduring role for oil and gas in the global energy picture, more contestation between the United States and China for regional influence is possible. Finally, it is possible that Western states will turn away from hydrocarbons for ecological reasons, while China and the developing world remain devoted to them for economic reasons. This could manifest almost as a U.S. abdication of a future role in the Middle East, with China picking up much of the slack.

And this is not to say anything about how governments will help populations adapt to climate change. The capacity of many regional governments is low, as we have seen in their response to the Covid-19 pandemic. In the Levant and North Africa, infrastructure is often inadequate and poorly maintained. Rural populations have been flooding into cities for a century, and that flow may accelerate further, creating instability. As water dries up, temperatures rise, and farmers move, countries’ food imports may rise, straining currency reserves. In the Persian Gulf, the sparkling cities that have been built in the last half-century may find themselves below sea level a half-century from now. No government in the region seems fully prepared for pushing large numbers of government workers into the private sector, and no private sector seems ready to absorb them. Meanwhile, an exodus of millions of expatriate workers in the Gulf could depress economies for years. Not only will the local workers who replace them be more expensive, but their own consumption patterns have been a major engine of economic development.

For some of the region’s biggest energy exporters, one part of the response needs to be remaining as energy exporters in a post-oil world. The UAE and Saudi Arabia have been investing billions of dollars in solar farms around the world, and the Saudi Green Initiative aims to boost renewables to half of the country’s energy mix, up from 0.3 percent in 2019 , mostly using solar power. The skills these countries gain deploying large-scale solar projects at home and abroad can potentially make them global leaders in implementation of solar energy.

In addition, the UAE has been especially aggressive in aligning itself with global efforts to promote renewable energy. It hosts the UN-affiliated International Renewable Energy Agency (IRENA), and 15 years ago launched Masdar, a platform for developing sustainable energy solutions based around what aspires to be a zero-carbon city. The strategy appears to be to not only align the UAE with current energy production patterns, but to get in early on future ones as well.

One technology that could emerge as important in coming years is hydrogen. Commercializing hydrogen as a fuel source could draw on assets widely available in the Middle East—either natural gas for blue hydrogen or sunlight for green hydrogen—but the financial feasibility will depend on scientific advances that have not yet been made.

What is especially important to grasp here is that while Middle Eastern governments have some agency in how this develops, much is well beyond their ability to shape. Whatever they do, the principal drivers of the global energy transition will come from outside the region. That transition will have a profound impact inside the region, and it will shape the way the region relates to the rest of the world. That change could be profound, and it could be coming very soon. 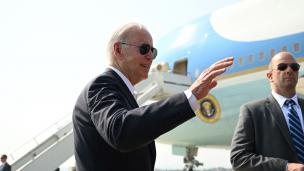 Rethinking Saudi Arabia
By Jon B. Alterman
June 23, 2022
In the News

The Middle East’s Indifference to Ukraine Is a Warning
By Jon B. Alterman
May 12, 2022
Commentary

The Ukraine War Isn’t a Sprint
By Jon B. Alterman
April 13, 2022
Commentary

Can the U.S. force the Saudis to ease problems at the pump?
National Journal | Brian Dabbs
March 7, 2022
Commentary

Ukraine, the Middle East, and Hedging
By Jon B. Alterman
March 1, 2022
View all content by this expert