Not Contributing Enough? A Summary of European Military and Development Assistance to Ukraine Since 2014

President Trump has stated that one of the reasons to withhold $250 million of U.S. military assistance to Ukraine was due to the lack of European and other nations’ contributions to Ukraine. How much has Europe been providing to Ukraine since Russia’s illegal annexation of Crimea and military incursions into the Donbas (Eastern Ukraine) in 2014? It is estimated that two-thirds of aid to Ukraine comes from European countries.

By way of background, the U.S. government has given between $270 million and $510 million of aid to Ukraine each year since 2014 (peaking at $513 million in obligations in 2016) for a total of $1.96 billion in military and economic assistance between 2014 and 2018. This assistance supports Ukraine’s institutions, anti-corruption efforts, and energy diversification, as well as humanitarian assistance. The United States has provided approximately $800 million in military assistance to Ukraine, which includes small arms, counter-narcotics efforts, training programs, and military advisers to support and improve the Ukrainian forces, among others. Some of this military assistance has come through the European Deterrence Initiative (EDI) for support to the military and national security forces, which includes intelligence support, training and logistics support, and equipment (e.g., C2 systems; situational awareness systems; secure communications; military mobility; night vision; military medical treatment; maritime and border security operations; and defensive weapons systems). As of 2017, military assistance (outside of EDI) also includes the provision of lethal aid for defensive purposes, including the sale of U.S.-made Javelin antitank missiles and launchers to Ukraine.

Q1: How much humanitarian and development assistance has the European Union and Canada provided to Ukraine since 2014?

A1: The European Union is the largest donor to Ukraine, and Ukraine is the largest recipient of EU macro-financial assistance to any non-EU country. The European Union has given, on average, over $710 million (€650 million) per year to the country since 2014—almost twice as much as the United States average. The European Bank of Reconstruction and Development has given a similar amount ($3.8 billion (€3.5 billion) from 2014 to 2017), much of it taking the form of investments and loans rather than direct grants. Several other EU and NATO countries—most notably Germany, France, Canada, and the United Kingdom—have also given significant sums. Germany contributed a total of $860 million (€786 million) in disbursements between 2014 and 2017 (much of it toward higher education and post-emergency reconstruction), while the United Kingdom provided around $115 million (€105 million), principally in peace-building, conflict prevention, and public-sector policy management assistance. Canada alone disbursed close to $573 million (CAD 760 million) between 2014 and 2016. 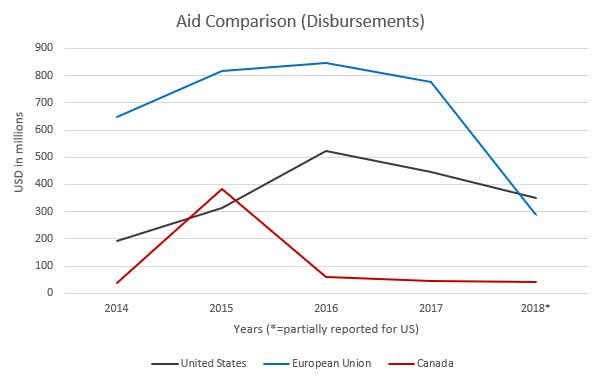 Q2: How much military aid does Ukraine receive from European countries and Canada?

A2: In 2016, NATO established a Comprehensive Assistance Package as an umbrella for specific initiatives to improve Ukraine’s command and control capabilities, logistics, cyber defense, and demilitarization—among others—with several NATO nations driving each initiative. The United Kingdom, for example, has sent more than 1,300 soldiers to Ukraine since 2015 and trained some 10,000 Ukrainian troops. Germany has lead the Radioactive Waste Disposal Trust Fund, while Poland and Lithuania have hosted high-level seminars on countering hybrid warfare. Canada has sent 200 armed forces personnel to provide military training and has provided millions in non-lethal military equipment. The United States also contributes to this broader NATO effort, and the United States European Command has coordinated assistance from other European countries (including the United Kingdom and Poland) since 2014 to help synchronize military assistance efforts.

Q3: How much military equipment comes from the United States?

A3: The United States is the largest donor of military equipment to Ukraine, but Ukraine also purchases non-U.S. military equipment with non-U.S. funds. The United States’ most recent package of $250 million in military aid is earmarked mostly for battlefield equipment, including sniper rifles, grenade launchers, and sonar buoys that can detect Russian vessels and submarine traffic. The United States has also provided non-lethal assistance, such as uniforms, blankets, and counterbattery radars. In addition, other NATO allies such as Lithuania, Poland, Bulgaria, and Canada have either provided or authorized the sale of lethal aid to Ukraine.

Q4: How much impact does Western aid have on the conflict in Ukraine?

A4: Since 2014, 13,000 people have been killed in fighting in Ukraine, and nearly 1.5 million have been displaced. Ceasefire violations continue daily; just last week, two Ukrainian soldiers were killed, adding to the approximately 3,000 soldier deaths since the conflict began. The humanitarian situation in Eastern Ukraine continues to be dire, with significant impact on water and sanitation facilities and injuries from improvised explosive devices. Ukraine is the third-most affected country in the world by mines, after Afghanistan and Syria. An estimated 24,000 people have been injured in the conflict since April 2014, and close to 10,000 pre-conflict prisoners remained in detention beyond the contact line in mid-2017. There seems to be no end in sight to the conflict. U.S., European, and NATO military and non-military support to Ukraine has been critical to helping the country defend itself against Russian military aggression. Non-military assistance has been equally important to help Ukraine stabilize its economy and continue on its reform track. This aid includes more than $38 billion in U.S.-backed assistance negotiated with the International Monetary Fund, with conditionality linked to strengthening anti-corruption mechanisms and reducing energy subsidies that have provided a key source of Russian leverage over Ukraine. Limiting military assistance to Ukraine would considerably weaken its ability to counter Russian aggression.

Iain King CBE is a visiting fellow with the Europe Program at the Center for Strategic and International Studies in Washington, D.C.