The Global Polio Eradication Initiative (GPEI) strategy for 2019-2023 calls for strengthening immunization and health systems to “help achieve and sustain polio eradication.” Reaching this goal will require the polio program to coordinate with a broader set of immunization stakeholders, including Gavi, the Vaccine Alliance, which provides support for routine immunization to 73 of the world’s poorest countries. In fact, the two organizations are already moving toward greater alignment with the recent inclusion of Gavi CEO Seth Berkley on the Polio Oversight Board (POB), the GPEI’s highest decisionmaking body. But while the affiliation has the potential to help both initiatives meet their respective goals, challenges remain, and roles must be clarified.

When it took on global polio eradication in 1988, the World Health Assembly specified that the task be achieved by strengthening national immunization systems. But the GPEI’s remarkable successes, especially in the later stages, have often come by working outside of weak vaccine delivery mechanisms. While many countries with solid routine immunization programs were indeed able to utilize them to eliminate polio, as GPEI moved forward, it became evident that others could not. Many systems simply were not reliable enough to meet the GPEI’s ambitious goal of “reaching every last child.” In far too many places, in fact, routine vaccination coverage was non-existent or well below 50 percent.

As a result, the GPEI became more independent, administering polio vaccinations through regular campaigns often in parallel to national immunization programs. By developing its own command and control mechanisms largely overseen and financed by an international partnership, the initiative was able to put a laser-like focus on identifying and preventing cases of poliovirus. Millions of volunteer vaccinators moved through countries on a regular basis, squeezing the oral polio vaccine into the mouths of children everywhere from train stations, to camel trains, to individual houses, be they huts in the most remote corner or corrugated metal lean-tos in urban slums. Through this method, the GPEI reduced the number of wild polio cases to a mere 33 last year, down from an estimated 350,000 when the initiative began.

Now, with vaccine-derived polio outstripping wild virus disease last year at a rate of 3-1, and the need to fully incorporate the inactivated polio vaccine (IPV) into all health systems, it is time to reintegrate polio and routine immunization services. Vaccine-derived polio emerges in areas where the live virus oral polio vaccine (OPV) is used. OPV is an essential tool in eradication since it is inexpensive, easily administered through oral drops, and confers immunity not just to the recipient, but to others in the community as well. But it has a downside: in areas of low immunity, OPV can pass among the unvaccinated and eventually mutate into a disease-causing state as virulent as that of wild poliovirus. Ensuring all children receive OPV through strong immunization systems mitigates that risk by increasing coverage rates. Including IPV as part of regular childhood vaccination schedules further ensures a polio-free world now and into the future. IPV contains a killed poliovirus which cannot cause paralysis and protects against all three poliovirus types. But it is more expensive, must be administered by a trained health professional through an injection, and only protects the recipient. Increasing polio immunity worldwide with both OPV and IPV requires the GPEI to better support weak immunization systems. That is where Gavi comes in.

While Gavi has worked with the GPEI for the last several years, principally aiding in IPV introduction and support, the relationship between the two will need to be clarified and expanded for a true partnership to succeed. Toward that end, a range of issues would need to be ironed out:

Gavi has its own concerns as well. The alliance is often talked about as a logical support structure for polio’s extensive disease surveillance and laboratory network and its vast cadre of health personnel once polio is eradicated. But Gavi officials and board members have argued that the polio program’s assets are beyond what may be appropriate or needed for smaller-scale operations and transfers should be carefully considered. The Gavi board and the organization’s officials are further concerned about the top-down nature of the GPEI, given that the Gavi mission requires countries to specifically apply for its aid. While the GPEI has listed immunization system strengthening as one of its priorities, associated accountability mechanisms have been ineffective, and little concrete progress has been made. As the organizations negotiate their collaboration, Gavi is pushing for more country ownership, solid GPEI commitment to immunization system strengthening, and offering time-limited support as a bridge to country financial support for long-term polio infrastructure.

Even as talks over roles and responsibilities continue, Gavi and the GPEI are already working more closely together. The new GPEI strategy, launched at the World Health Assembly’s annual meeting this month, includes a joint results and accountability framework with Gavi and other immunization partners. The collaboration increases the odds that the eradication program will develop deliberate, measurable ways it can contribute to immunization system strengthening. As part of the plan, Gavi and the GPEI will identify areas of low vaccination coverage and work together to raise immunization rates. In addition, they will facilitate coordinated planning on polio vaccination campaigns to determine the feasibility of including other antigens.

The move toward better cooperation will benefit Gavi as well as the GPEI. As it looks to its next strategic period and 2020 replenishment, Gavi is putting an even greater emphasis on achieving equity. The priority is likely to require the initiative to move further into efforts to improve vaccine delivery to millions of children lacking access to health services. The GPEI has been extremely successful not only in immunizing children in remote areas but also in creating strategies to reach refugees, mobile populations, and those in conflict settings. It also has developed extensive disease surveillance and data collection mechanisms that can help pinpoint in near real-time where further resources are needed. Gavi, the GPEI, and other partners could reconfigure those tools to work better within health systems and accelerate progress toward broader programmatic goals.

While it will take some work, and there are challenges, the time is right for Gavi and the GPEI to collaborate more fully. The GPEI needs strong routine immunization systems to eliminate vaccine-derived poliovirus and complete eradication. Gavi can enlist support to leverage sustainable immunization infrastructure created by the GPEI. The two organizations can also contribute to and benefit from the broader strategic overhauls occurring at the WHO for the next iteration of the Global Vaccine Action Plan and movement toward primary health care improvements, universal health coverage, and global health security enhancements. Country-based immunization systems are at the center of all these efforts, and a more aligned GPEI and Gavi will be better positioned to ensure that focus is maintained. If successful, the move will be a win for both organizations and for the health of all the world’s children.

Nellie Bristol is a senior fellow with the Global Health Policy Center at the Center for Strategic and International Studies in Washington, D.C.

Most Recent From Nellie Bristol 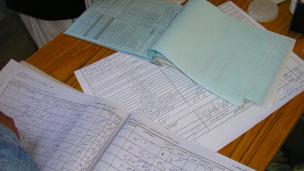 The Future of Polio Surveillance
By Nellie Bristol, Michaela Simoneau
May 6, 2019
View all content by this expert