Potential Scenarios for Venezuela’s Future in 2020

In April 2020, the Future of Venezuela Initiative (FVI) hosted a series of analytical exercises to explore the possible political scenarios that may develop in Venezuela as the Covid-19 pandemic continues. This commentary is the final product of those exercises. After introducing recent developments in Venezuela’s struggle for freedom, the authors present four potential political scenarios for the country and discuss key driving factors for each one.

As the Covid-19 pandemic develops, the Maduro regime is more isolated now than it has ever been before. Over the past two months, the international community, led by the United States, ramped up its maximum pressure campaign. In February and March, the Treasury Department sanctioned two trading subsidiaries of Rosneft, a Russian oil company that had been handling over 70 percent of Venezuela’s crude. On March 28, Rosneft announced that it sold its Venezuela operations to an entity wholly-owned by the Russian state, further crippling Venezuela’s beleaguered oil industry just as the price of crude reached record lows.

In addition, the Justice Department unveiled indictments on Maduro and 14 other top officials who were charged with drug trafficking, narco-terrorism, and corruption. On March 31, the State Department proposed a new Democratic Transition Framework for Venezuela, which laid out a plan for Maduro and Guaidó to cede power to a transitional government that would coordinate free and fair elections. The next day, the Trump administration announced a plan to bolster its counter-narcotics efforts in the Caribbean.

More recently, ex-Green Beret Jordan Goudreau led a botched invasion in which former members of the Venezuelan military, along with two Americans, attempted to enter the country and capture Nicolas Maduro. Goudreau, who had a short-lived agreement with some members of the opposition, moved forward with the operation on May 3 despite having no support from the United States or the interim government.

The Venezuelan people continue to be repressed by government security forces, which seek to obfuscate the severe state of the country’s hospitals and the extent to which the coronavirus has spread. While the Maduro regime continues to claim that there are few Covid-19 cases in Venezuela, it nevertheless is using the pandemic to attempt to obtain financial and humanitarian assistance from the international community. Inside the country, the humanitarian situation is deteriorating rapidly. The regime is enforcing a quarantine despite the fact that many residents do not have access to electricity, running water, or gas. Throughout the country, the most vulnerable Venezuelans have resorted to protesting—despite the health risks—because the regime’s policies and mismanagement are making it impossible for them to survive. Fuel shortages have caused additional suffering. Just as many Venezuelans are going hungry, farmers are leaving their crops to rot in the fields because there is no gasoline to transport produce to urban centers. At the same time, a recent survey revealed that 70 percent of health workers were forced to miss at least one day of work in the last week of March because they did not have gasoline. 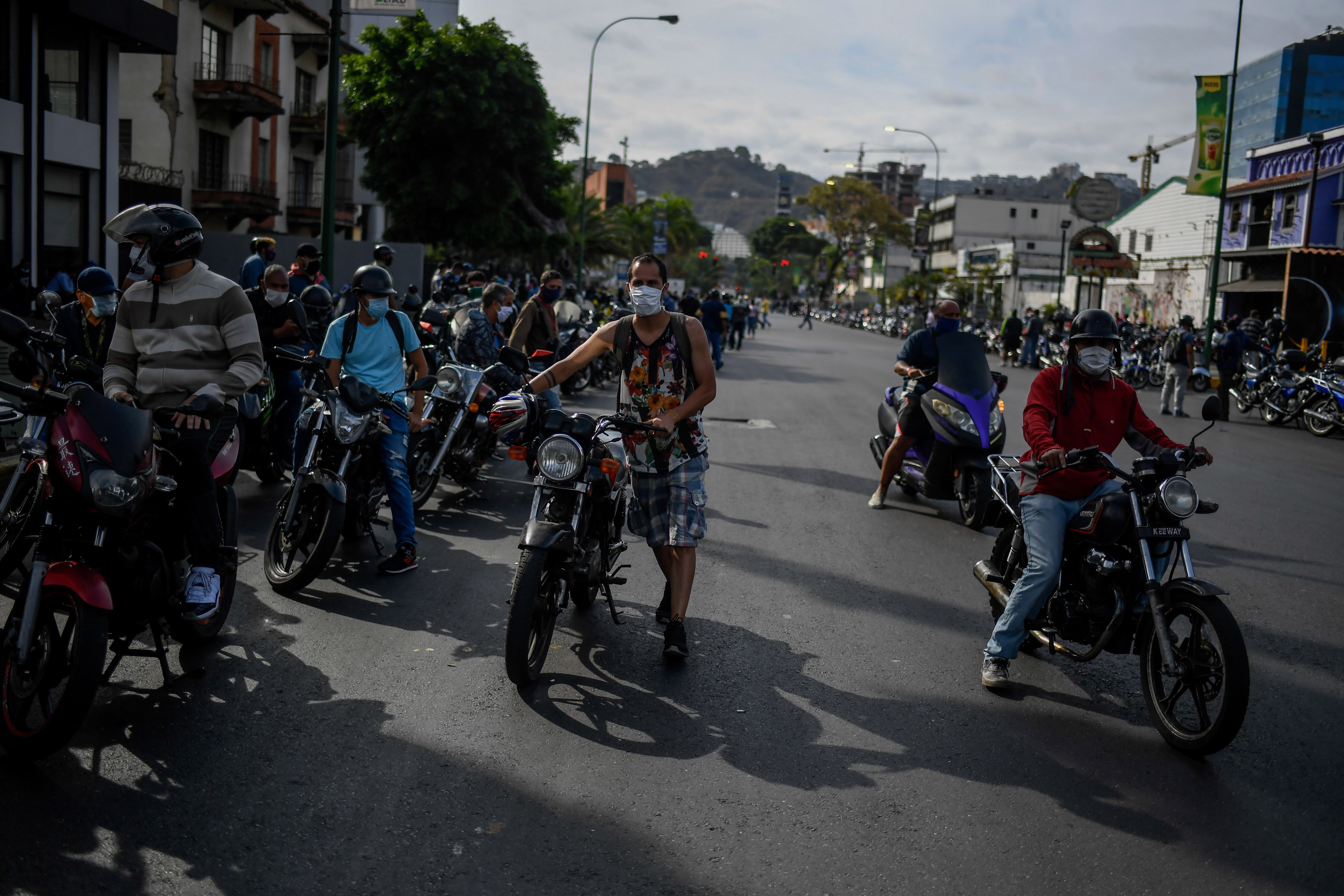 Venezuela has been unraveling for so long that the term “status quo” is synonymous with continued collapse. The economic and humanitarian situation continues to worsen as the Maduro regime becomes more repressive, inching further toward criminal activities and violating human rights. This year is no exception. On the contrary, factors like Covid-19 and low oil prices may accelerate the country’s decline into a failed, criminal state and prompt another wave of mass migration. Externally, the status quo scenario will ensue if Maduro finds enough international support to scrape by. For example, Russia—through its new state-owned entity— would need to successfully replace Rosneft as the vehicle through which the Maduro regime circumvents U.S. sanctions. Additionally, other allies will need to continue propping up the Maduro regime, as Iran recently did when it supplied the regime with materials and technicians to restart a refinery.

With the country’s oil industry in a decrepit state, this status quo scenario would be sustained if the Maduro regime continues to evade international efforts to curtail its illicit activities, including illegal mining and drug trafficking, which the regime uses to maintain political loyalty.

Internally, the status quo will also remain so long as Maduro can repress and intimidate the opposition, using the Covid-19 pandemic as an excuse for a crackdown on political dissent. In addition to the dozens of journalists who have been attacked or harassed in recent weeks, at least 10 opposition lawmakers and staff, as well as members of Guaidó’s team, have been arbitrarily detained by the regime’s security forces this year. Furthermore, as Maduro has repeatedly warned, Guaidó himself may face arrest.

Covid-19 is a critical political factor for the opposition, which is now unable to organize mass protests and has once again splintered on whether or not to negotiate with the regime. That being said, the pandemic may provide an opportunity for Venezuelan opposition forces to rebuild their unity and establish credibility. Efforts such as $100 cash transfers for health workers and lobbying the international community for immediate and apolitical humanitarian support can help. The status quo is more likely to continue if Maduro successfully stifles these efforts, or if the interim government is unable to maintain its credibility and implement these plans transparently. Though Guaidó has denied any connection to the recently failed incursion, this incursion may nevertheless damage his credibility as confusion spurs regarding the involvement of his advisers.

The Maduro regime is adept at using negotiation efforts to buy time and quell international pressure. In this scenario, Maduro takes advantage of the United States’ Democratic Transition Framework, as well as the Covid-19 pandemic, to initiate another round of negotiations with elements of the opposition. After a few months, these negotiation efforts dissolve, as they did last year in Barbados, when it becomes clear that the regime is unwilling to negotiate terms for free and fair presidential elections or for Maduro’s exit. While dialogue efforts falter, the country will spiral further into crisis, and the Maduro regime will continue addressing the pandemic by spreading disinformation, attacking the press, and cracking down on political opponents.

Internally, this scenario is conditioned on a certain level of splintering within both political camps. Some elements of the opposition will be willing to negotiate, perhaps believing that outcomes will be different this time, or out of desperation if the situation becomes even more precarious amid crumbling infrastructure, repression, and shortages. At the same time, if this scenario occurs, then it is likely that at least some elements of the regime have begun recognizing that Maduro has to go, prompting Maduro and his inner circle to appease these elements by pretending to negotiate.

This scenario depends on external drivers as well. The international community is eager to facilitate a democratic transition. As the humanitarian situation worsens due to Covid-19 and internal factors, countries that hope to bring about a peaceful transition may end up attempting one more time to mediate dialogue between the Maduro regime and the opposition. In doing so, mediating countries may risk giving the Maduro regime a veneer of legitimacy or more time to stay in power. Also, any negotiation attempt should consider the fact that Venezuela is a mafia state run by organized criminal groups. If, in early stages of negotiation, the regime indicates that it is unwilling to seriously negotiate terms such as those stated in the Democratic Transitional Framework, then mediation efforts should be called off. 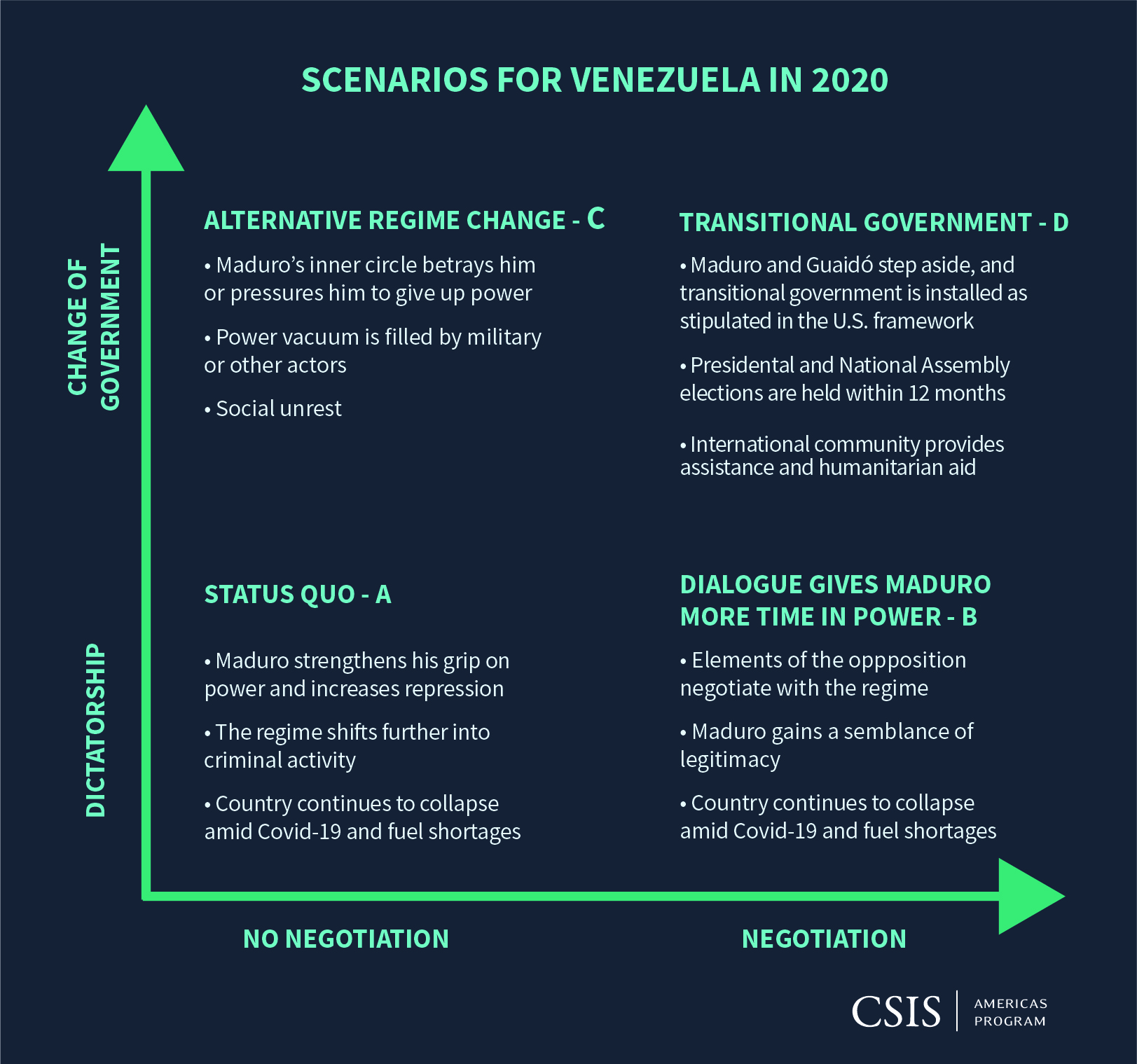 In this scenario, high-level regime officials turn on Maduro and replace him, either with another Chavista leader or the armed forces. This scenario—essentially a “palace coup”—will occur if internal and external conditions make ousting Maduro the most logical step for high-level officials. Recent efforts by the United States, including the Justice Department’s indictments and Democratic Transition Framework, could sow the seeds for this sort of regime change, as Maduro becomes more toxic, and the promise of lifting targeted sanctions becomes more alluring. This scenario may also ensue if the international community can derail the illicit economies with which the Maduro regime buys political and military loyalty, including illegal mining and drug trafficking.

Internally, key drivers for this scenario include the continued collapse of infrastructure, persistent shortages, and an organized and effective opposition effort. These factors will continue making the Maduro regime a liability for military and civilian elites alike, who will be more willing to instigate regime change on their own terms than cede power to the opposition.

This scenario is full of unknowns, among them the question of which official(s) would replace Nicolás Maduro and how willing they would be to negotiate with the opposition and the international community to facilitate a democratic transition in exchange for immunity. Regardless, an “alternative regime” would be fragile, with Chavista factions, non-state armed groups, and the interim government vying for power and legitimacy. This scenario also brings with it the risk that Venezuela continues to collapse, especially if the transition does not take hold, and democratic forces are unable to fill the ensuing power vacuum. With Maduro gone and various factions struggling to grasp onto power, the state itself could disintegrate, either fully or in some geographical areas. This could leave colectivos, non-state armed groups, and foreign governments such as Cuba or Russia to fill the void as they pillage the country’s natural resources and violate human rights.

For those seeking to build a prosperous democracy in Venezuela, scenario D is the most encouraging. In this scenario, following the guidelines set forth in the State Department’s Democratic Transition Framework, Maduro and Guaidó would step aside to make way for a temporary Council of State, which could administer free and fair elections overseen by the international community. Both Guaidó and Maduro would be eligible to run for president. In exchange, the United States would progressively lift sanctions, and the international community would provide financial assistance to address the humanitarian crisis. In this scenario, as conditions improve in the country, some Venezuelan migrants could begin their return.

For this scenario to happen, both internal and external pressures need to increase simultaneously. The international pressure cannot come unilaterally from the United States. The Lima Group and European Union have expressed support for the Democratic Transition Framework. They need to work with other countries, such as Mexico and Ecuador, to maintain pressure on the Maduro regime through sanctions, indictments, and diplomatic isolation. Moreover, domestic pressure must persist. Opposition forces need to consolidate into a cohesive unit, and, eventually, resume massive protests on the streets. Some military and regime officials will need to defect for this scenario to take hold. 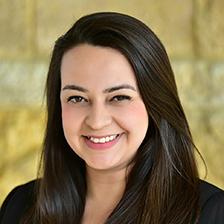