Negotiations are still underway as a critical deadline approaches on December 5, but the G7 is inching toward a price cap that will do little to cut Russia’s oil revenue. The G7 price cap would defuse a package of EU sanctions that could drive Russian oil exports off the market and create a price spike. But the $65 per barrel range under consideration poses no threat to Russia’s revenue stream, and authorizing trade below the price cap could increase demand for its oil. Russia has threatened to ban oil sales to companies and countries that join the price cap.

Q1: Where does the price cap stand?

A1: On November 22, the U.S. Treasury’s Office of Foreign Assets Control (OFAC) updated its guidance on the proposed price cap on Russian oil exports, but included no details on the exact price threshold. As of November 28, EU diplomats are considering a price cap in the range of $65 per barrel. EU officials are also discussing how frequently the price cap should be reviewed and adjusted. Setting the cap in this proposed range would prevent a big drop in Russian exports but would do very little to dent its oil income.

As of November 28, EU governments were still debating over how much to ratchet up economic pressure on Russia. Poland and Estonia argue that a price well below $65 per barrel is necessary to deprive Russia of oil revenue, while Greece, Cyprus, and Malta (which have large shipping industries) prefer a price closer to $70 per barrel. U.S. Treasury officials have generally been wary of setting a lower price.

At these proposed levels, the price cap looks toothless. Self-sanctioning by market players, or the unwillingness to buy or trade Russian volumes, means that Russia has already been forced to drop its price. As of November 28, Brent crude oil was trading at around $84 per barrel but Urals—Russia’s flagship crude blend—had dropped to $52 per barrel. Buyers accessing cheaper Russian crude may pay more for insurance and freight, eating into some of this differential. But in India, for example, even delivered crude net of shipping and insurance costs is below the proposed price cap of $65 per barrel. Pushback from some EU member states may require a lower price threshold—perhaps below $60 per barrel.

A2: OFAC and the United Kingdom’s Office of Financial Sanctions Implementation (OFSI) have published new guidance in recent weeks. The price cap is designed to bar support services from the "price cap coalition" countries for any Russian oil exports sold above the designated price. OFAC noted on November 22 that these services include trading/commodities brokering, financing, shipping, insurance including reinsurance and protection and indemnity, flagging, and customs brokering.

Market players will have to attest that they are abiding by the rules. Last week, OFAC affirmed its September guidance identifying three tiers of reporting requirements for U.S. persons to earn “safe harbor” from OFAC enforcement. Those who are directly involved in transactions and have access to pricing information will have to retain and share invoices or contracts documenting commercial terms. Tier 2 and Tier 3 players that are slightly more removed from commercial transactions, such as financial institutions and insurance or reinsurance brokers, will face specific but generally lighter reporting requirements. The United Kingdom’s Office of Financial Sanctions Implementation (OFSI) will enforce a similar three-tiered system. U.S. service providers must retain relevant records for five years. The U.S. Office of Foreign Assets Control (OFAC) states that companies that violate or evade the price cap, for example by falsifying documentation, will be subject to civil or criminal enforcement.

OFAC and OFSI are targeting the first leg of sale of Russian crude or products. OFSI specifies that the price cap applies until a cargo “is delivered and passes through customs controls in a third country or is substantially transformed.” OFAC uses similar language, and specifies that Russian oil cannot then clear customs and then head out to water for sale to another party unless it is substantially transformed. The definition of “substantial transformation” is significant. Refining Russian oil into petroleum products will qualify, but “blending of crude oil alone” will not. For example, an Indian refiner can buy authorized cargoes of Russian crude oil, refine it, and sell petroleum products on to EU countries via tanker. But sanctions watchdogs want to prevent refiners and traders from simply blending Russian oil to evade sanctions.

OFAC is also seeking to prevent “gold plating,” or cost inflation of services as a backdoor way for market players to evade the price cap. It notes that “shipping, freight, customs, and insurance costs are not included in the price cap and must be invoiced separately and at commercially reasonable rates.”

The price cap has been watered down in some ways to win broader political support. OFAC stated that oil exports from the Sakhalin-2 field in Russia to Japan will be exempt. Sakhalin-2 was producing about 170,000 barrels per day (b/d) before Russia’s invasion of Ukraine. Kazakh origin oil transported via the Caspian Pipeline Consortium will also be exempt as long as it is accompanied by a certificate of origin attesting that it is non-Russian in nature. OFAC guidance recognizes the carve-outs for Russian oil exports to certain European countries that were outlined in EU sanctions in June. And press reports suggest the European Union may soften earlier terms that could have permanently barred vessels that violate the price cap terms from accessing EU shipping and brokerage services.

Q3: Will the price cap work?

A3: The clock is ticking. Policymakers are keen to avoid market disruptions, and OFAC states that all cargoes loading before December 5 and unloading prior to January 19 are exempt from the price cap. But the fact that negotiations are still unfolding suggests the difficulty of ramping up economic pressure on Russia while maintaining market stability.

U.S. Treasury officials seem to view the price cap as a defensive move to parry the worst potential impacts of the EU services ban. Based on public comments, Treasury officials are deeply concerned about a potential price spike—so a high price cap that does little to crimp Russian oil revenue may be acceptable. U.S. officials may also want to avoid the complications that would follow a lower cap. A significant gap between the price for Russian oil and global benchmarks would create huge arbitrage opportunities. Many traders would be tempted to cheat through illicit shipping, crude blending, or manipulation of documents to access cheaper Russian oil and earn big margins. Setting a higher price might reduce sanctions evasion and avoid these unmanageable market effects. Policymakers may also want to short-circuit the growth in new insurance, reinsurance, and brokerage services from other countries, as well as the creation of a larger “shadow fleet” of tankers to facilitate trade in Russian oil. 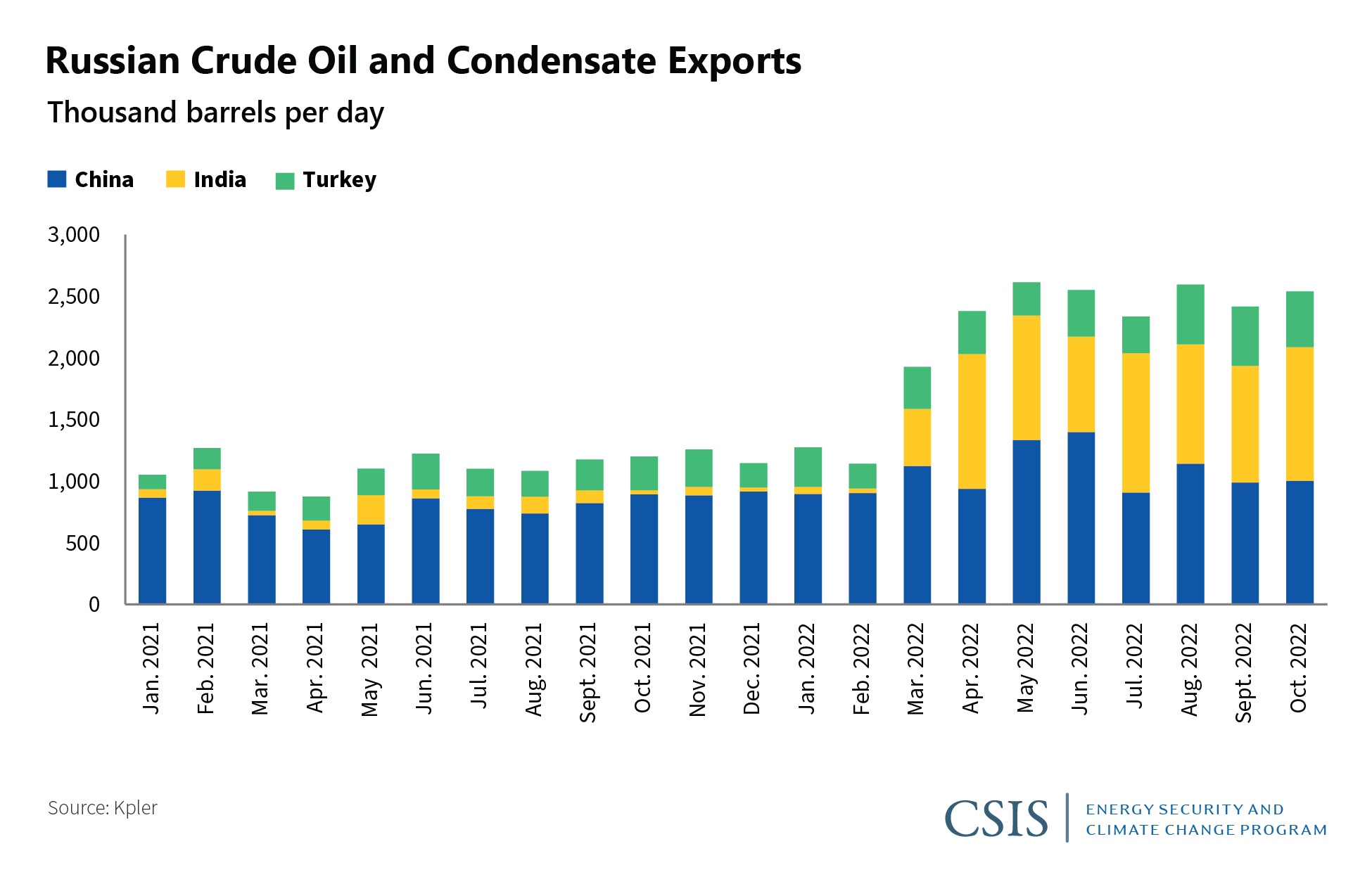 Ultimately what matters is how the price cap affects Russian oil trade outside Europe. Russia’s oil exports have held up better than expected since the start of its brutal and unjust war on Ukraine. Last year Russia exported about 3.1 million b/d in crude oil and feedstocks to Europe, as well as about 1.3 million b/d in refined products. As of October, Russia had lost about 1 million b/d in crude oil exports to Europe, but made up for most of these volumes by shifting oil sales from west to east. Moscow has mainly redirected its exports to India and China, although export volumes to the Middle East have grown as well.

All things considered, setting the price cap at or above the same level as Russia’s current realized price seems likely to extend the status quo. India and China have benefited from discounted Russian oil, and there are few signs that they will fully endorse the price cap. U.S. Treasury officials argue that even if major buyers do not join the “price cap coalition,” they will have more leverage vis-à-vis Russia and can push for deeper discounts. But authorizing all oil trade below the capped price could drive servicing costs down, creating the unintended effect of increasing demand for Russian oil outside the G7 states.

Still, the longer-term outlook for Russia’s oil and gas industry is bleak, and the impending ban on seaborne exports to Europe poses a big challenge. Even if Russia continues to export about 750,000 b/d via the Druzhba pipeline (as is allowed under the EU embargo) as well as other minor volumes to Europe, it will have a gap of more than one million b/d to fill. It is not clear that India and China have much appetite for more oil imports from Russia, so production declines could start to set in by the first half of next year. Over time, the cumulative damage of sanctions and export controls, as well as the exodus of joint venture partners and oilfield services companies, will take its toll on Russia’s oil output.

For now, the price cap is not shaping up as a powerful tool to weaken the Russian economy. Perhaps in a different period, with looser market fundamentals and less concern about inflation, policymakers would have been more emboldened to pressure Russia. At the moment, energy security concerns are top of mind and the G7 may have to play a longer game.