There is no simple way to introduce the challenges that China’s strategic presence and growing civil and military capabilities pose in competing with the United States. China’s capability to compete at given levels has increased radically since 1980 in virtually every civil and military area, and China has set broad goals for achieving strategic parity and superiority, although the timeframes for such goals are vague – and neither China nor the United States has published anything like a credible unclassified net assessment of current and future capabilities or provided details as to how each country’s broad statements about strategic goals would actually be implemented.

The Burke Chair is now presenting a regularly updated summary briefing on key developments in Chinese capabilities to compete with the United States and other powers. This briefing is supported by a wide range of graphs, maps, and tables that provide a diverse view of the summary data on a wide range of China’s strategic and military capabilities where these can be summarized in quantitative form or by using maps and selected quotes. It has added summary comparisons of China and the U.S. where possible, recognizing that the estimates are often different and controversial.

One key goal in developing this briefing is to illustrate the complexity of the various forms of competition, and the fact that the competition is both civil and military, is global rather than centered in one area like Taiwan or the South China Sea, and is often a competition for military and civil influence that goes far beyond Asia – and where each nation’s ability to influence and deter may well be more important than its ability to fight.

Another goal is to illustrate the sheer complexity of the competition and its many different dimensions, as well as the rapid rate of change in many key areas of military force, economics, and politics – rates of change where it is clear that experts are forced to speculate as to how each side will progress over periods of at least the next two decades to understand these vectors of change.

The briefing draws heavily on official sources, and it should be noted that the data provided often do not agree in detail – even if they are generated by the same source. It relies, where possible, on the U.S. Department of Defense’s annual report on Chinese Military Power for 2020, ( https://media.defense.gov/2020/Sep/01/2002488689/-1/-1/1/2020-DOD-CHINA-MILITARY-POWER-REPORT-FINAL.PDF ), which seems to be the most reliable and balanced official unclassified source available.

The briefing also includes reporting by the Congressional Research Service, U.S. combatant commands, Japanese and South Korean official reporting, and a wide range of other think tank and expert sources in an effort to deliberately illustrate the wide range of different official and expert estimates. These data again often differ in detail, and the original source must be carefully consulted to fully understand the figures involved .

The reader should also be aware that many of the summary graphics and data drawn from official sources and the work of other experts and think tanks can only highlight given aspects of competition, and they have to be taken in context. The sources of each page are shown in detail and again illustrate the complexity of competition and the need to both examine its full spectrum, as well as the details of each key area of particular interest.

Five key cautions need to be kept in mind in interpreting these estimates and data. 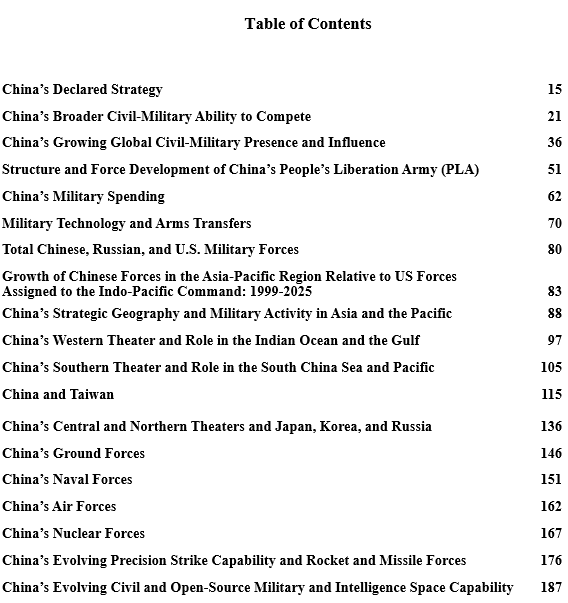 This report entitled, Chinese Strategy and Military Forces in 2021, is available for download at https://csis-website-prod.s3.amazonaws.com/s3fs-public/publication/210607_Cordesman_Chinese_Strategy.pdf?fG7hUZdWUVJgaJzyC4E9Qj1m3w13SfjQ .