What is the Significance of North Korea’s Rail-mobile Ballistic Missile Launcher?

While the timing of North Korea’s public demonstration of a KN-23 short-range ballistic missile (SRBM) rail-mobile missile launch platform on September 15, 2021 may have come as a surprise to defense and intelligence officials, the fact that they have been interested in developing such a capability was not. The subject of North Korean development of rail-mobile missile launch platforms has been of interest for years because of its potential to complicate planning and wartime targeting, with media reporting of such interest dating back to at least August 2016. This Korea Platform  provides a brief description of its development, technical characteristics, and potential operational procedures.

Interview data suggests that the development of a rail-mobile ballistic missile launch platform, along with other basing options, was likely considered by North Korean strategists and planners since the early stages of the nation’s ballistic missile program. However, with North Korea’s early acquisition of road-mobile ballistic missile transporter-erector-launchers (TEL) and mobile-erector-launchers (MEL) from foreign and domestic sources—and the initially small number of ballistic missiles in its inventory—it appears that the design and development of rail-mobile platforms were relegated a low priority and did not advance significantly during the 1980s – 1990s. However, in the 2000s, the introduction of foreign sanctions led to the precipitous decline in the availability of foreign TELs, MELs, and the components to manufacture them domestically. At the same time, the numbers and types of ballistic missiles in inventory were steadily increasing. Interview data suggests this resulted in a policy decision issued by the Second Economic Committee to secure additional and alternate launch platforms, including rail-mobile, becoming an increasingly high priority. This increased priority was accompanied by the introduction of solid-fueled missiles such as the KN-02 SRBM and the subsequent development of the KN-23 SRBM. What appears to be an initial focus on solid fuel systems simplified the task of designing a rail-mobile launcher and supporting railcars over designing them for liquid-fueled ballistic missile systems. However, while it is presumed to have taken place, almost nothing is known concerning the North’s research, development, or production of rail-mobile missile launchers for its larger longer-range liquid fuel ballistic missiles.

The development of rail-mobile launch platforms offers significant benefits from the North Korean perspective. Among these are:

A perfect example of this last benefit is exemplified by the September 15, 2021 test launch. This test took place in Yangdok-kun (Yangdok County) on a section of the Pyongra Rail Line that connects Pyongyang to Wonsan and points north. Within five kilometers east or west of the reported launch position, there are nine railroad tunnels on the same rail line, including one that is approximately 1.3-kilometers-long and another that is approximately 1.5-kilometers-long.

The above characteristics are enhanced by North Korea's little-understood history of using railroad tunnels for military purposes that dates to the Korean War and is regularly studied at the Pyongyang Railway College. During the war, UN Command’s air superiority destroyed or neutralized a vast majority of the North’s manufacturing and transportation infrastructures. Despite concerted and prolonged efforts by UN Command air forces, they were never able to destroy or neutralize the North’s rail network for any significant length of time. This network became the primary means of moving equipment and war supplies around the nation, and the railroad tunnels regularly served as shelters for rail equipment and supplies, and for repairing military equipment. 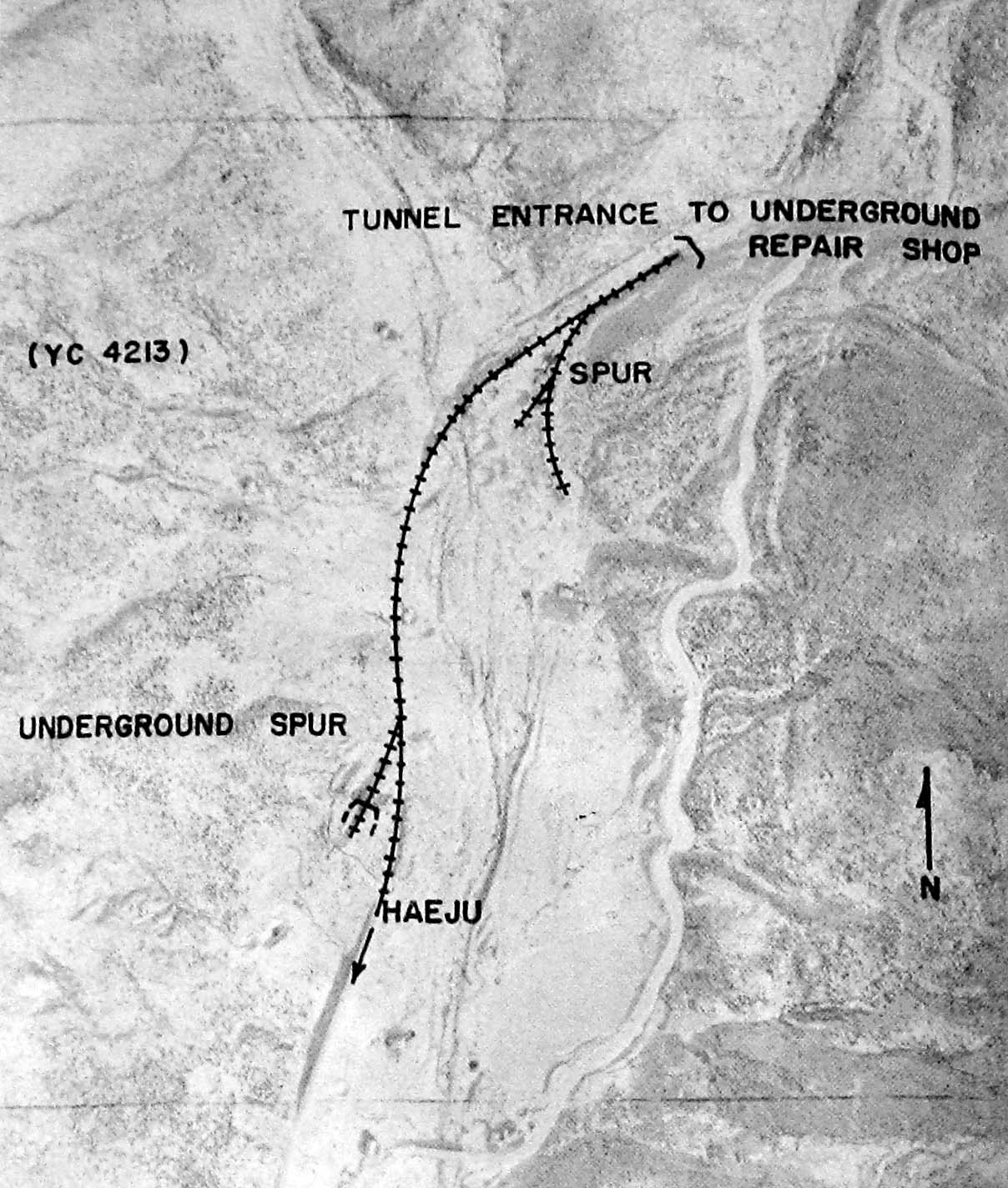 Caption: A declassified 1953 U.S. Air Force image map showing the location and layout of a North Korean railroad tunnel north of Haeju that was being used as a repair shop during the Korean War. (U.S. Air Force)

Following the war and through at least the late 1990s, North Korean railroad tunnel construction has often included internal rail sidings or rail spur lines leading to large shelters or military facilities. There are also dedicated military rail spur lines in mountainous regions that terminate in underground facilities. While recent information concerning railroad tunnel activities is limited, such activities have been noted by escapees and defectors.

The video of the KN-23 “railway-borne missile regiment” conducting the test launch shows that it consisted of one diesel locomotive and two railcars—one for the operating crew and one with the missile launcher itself. 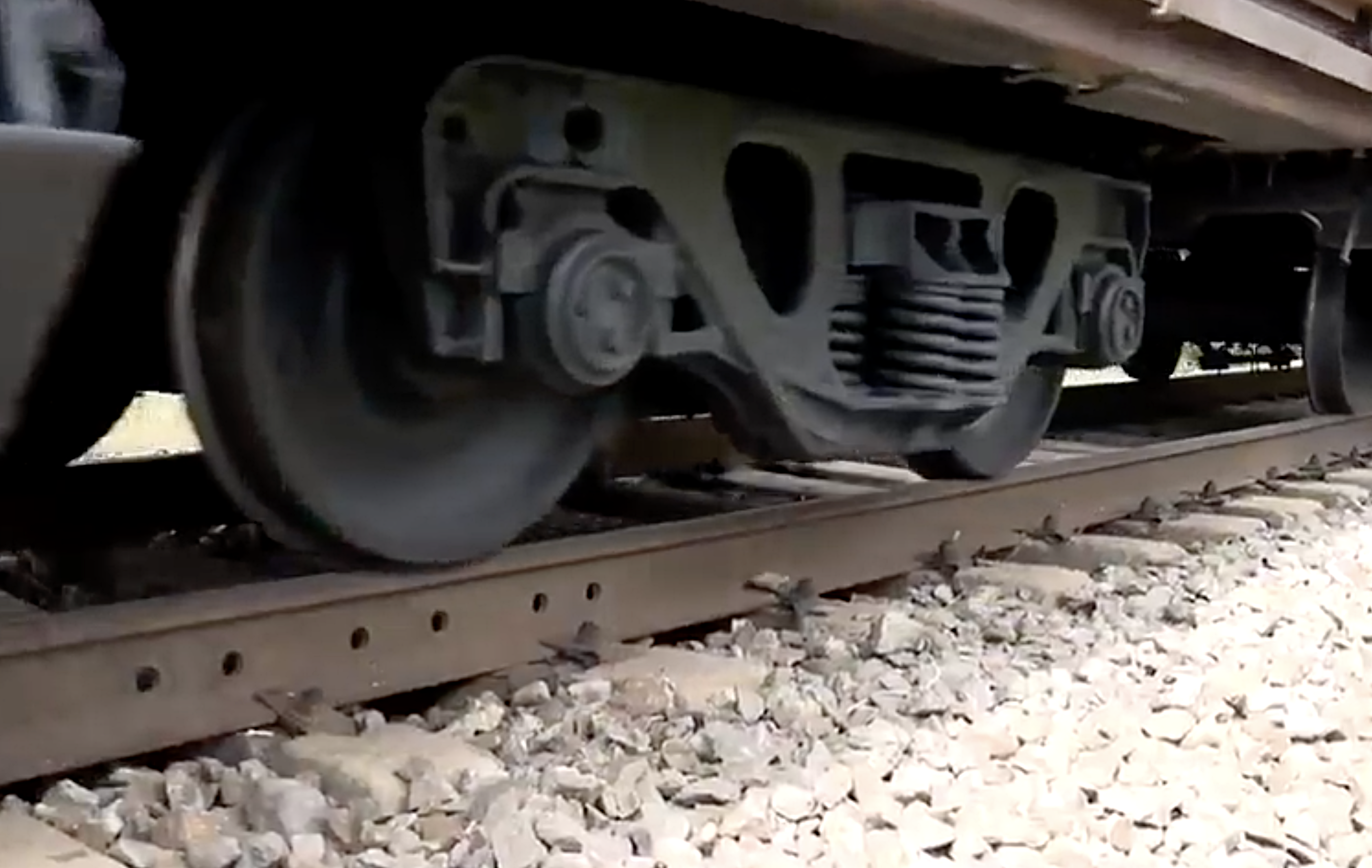 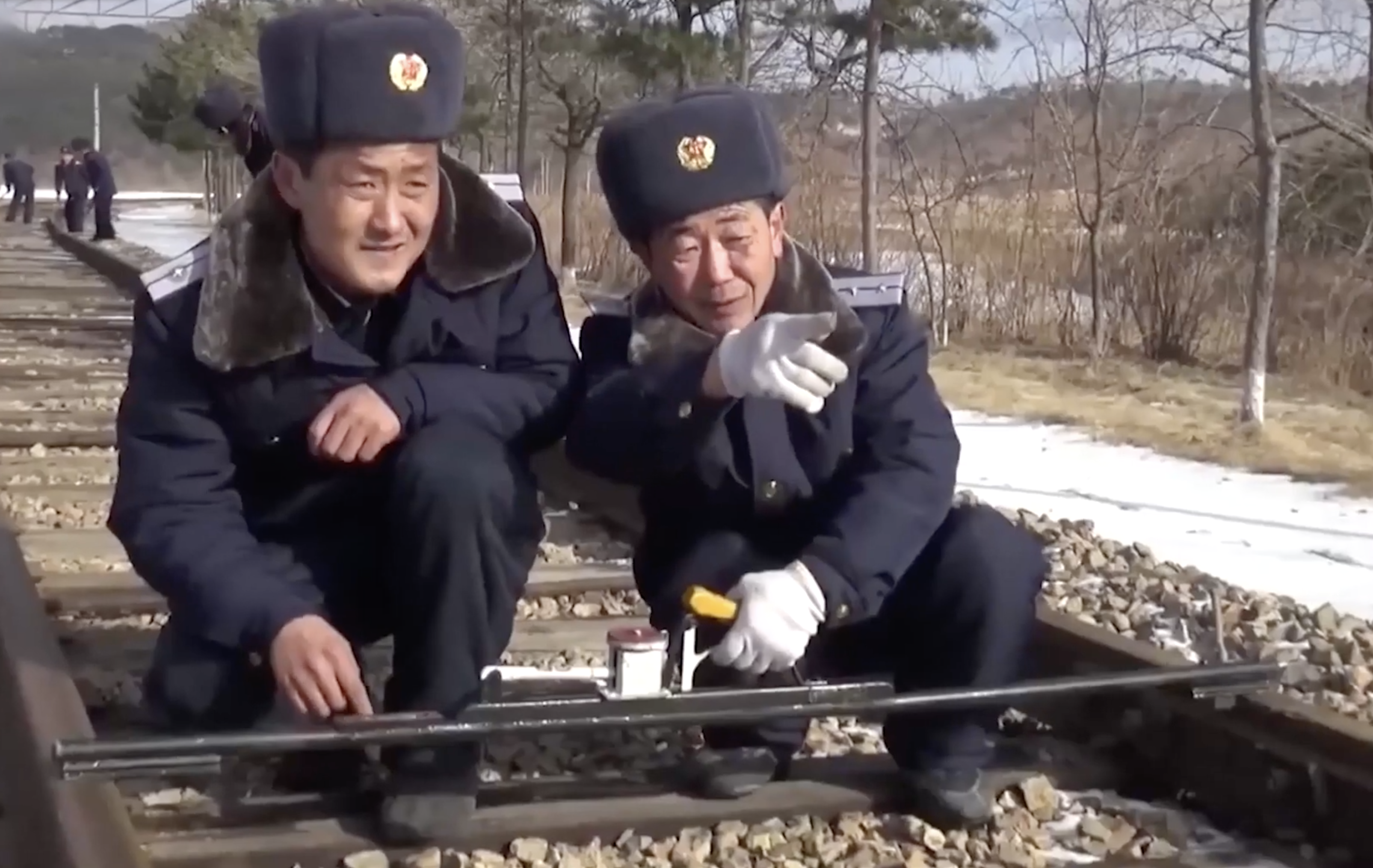 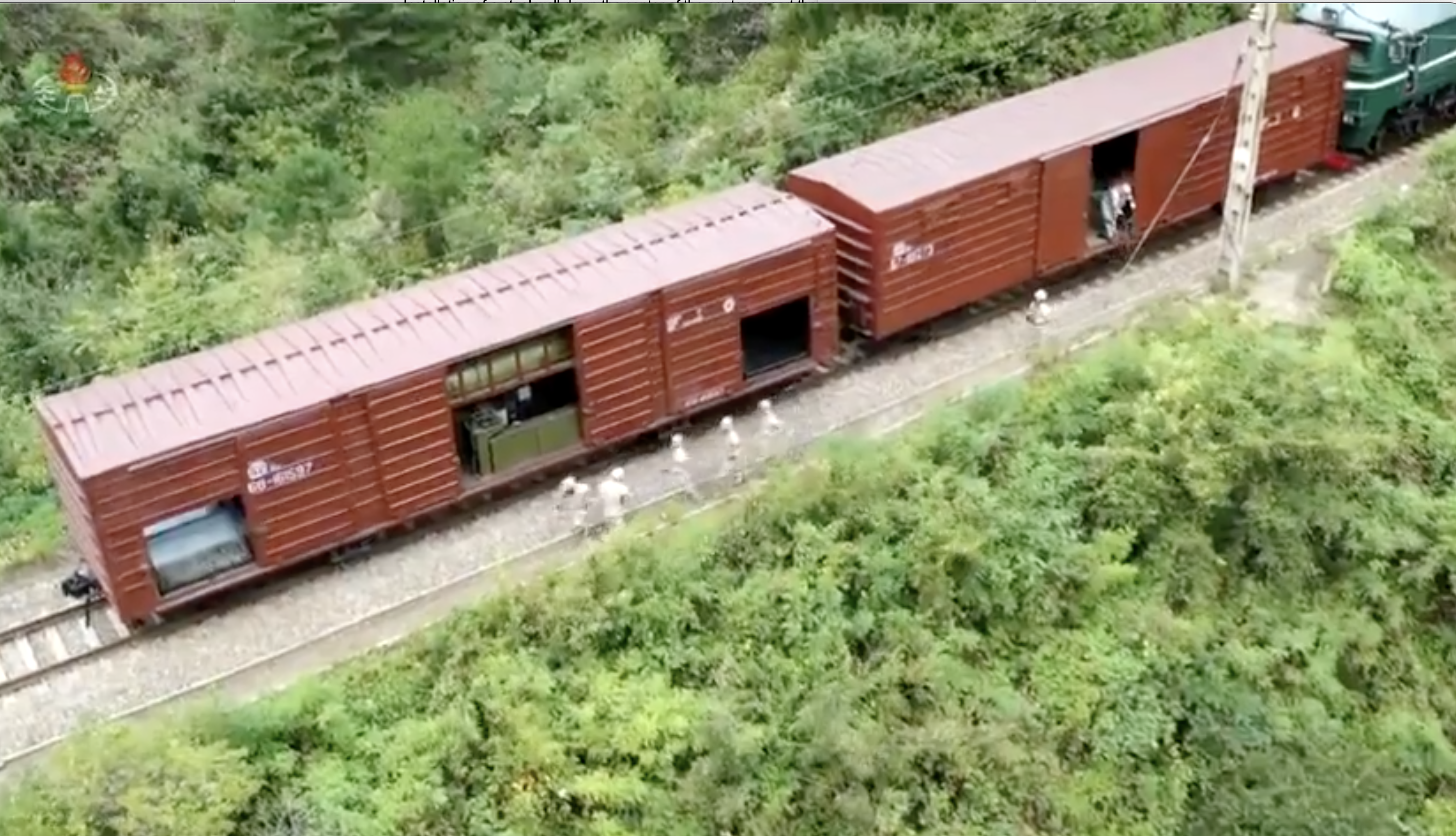 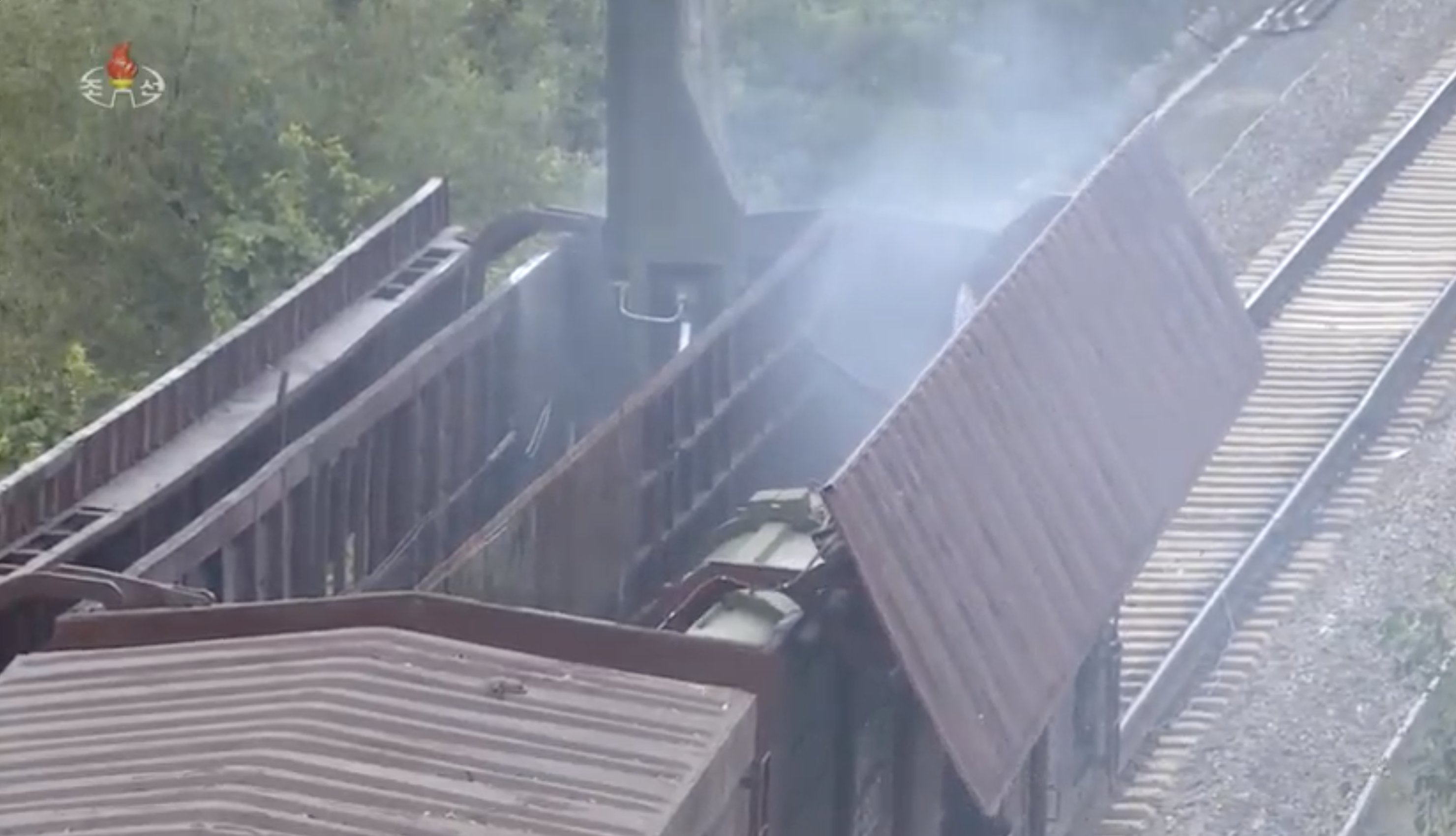 Caption: The folding roof doors, as well as the reinforced sidewalls and center support wall, are seen here after the launch of the first KN-23. The second KN-23 is just visible inside the railcar in its travel position, September 15, 2021. (KCTV) 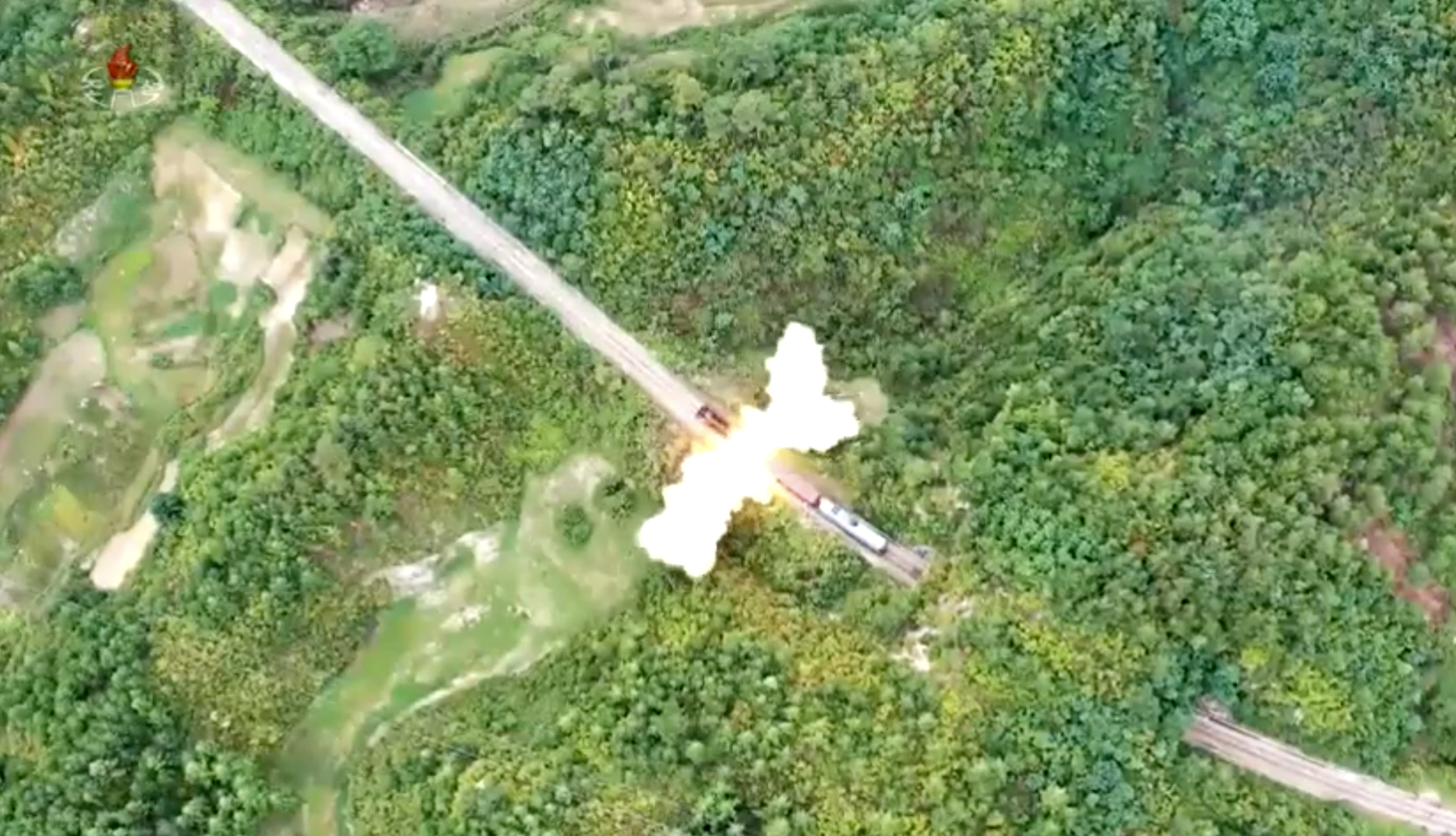 Caption: A view of a missile launch illustrating how the exhaust from the launch is directed out both sides of the rail-mobile launch car through the small doors at the end of the car, September 15, 2021. (KCTV) 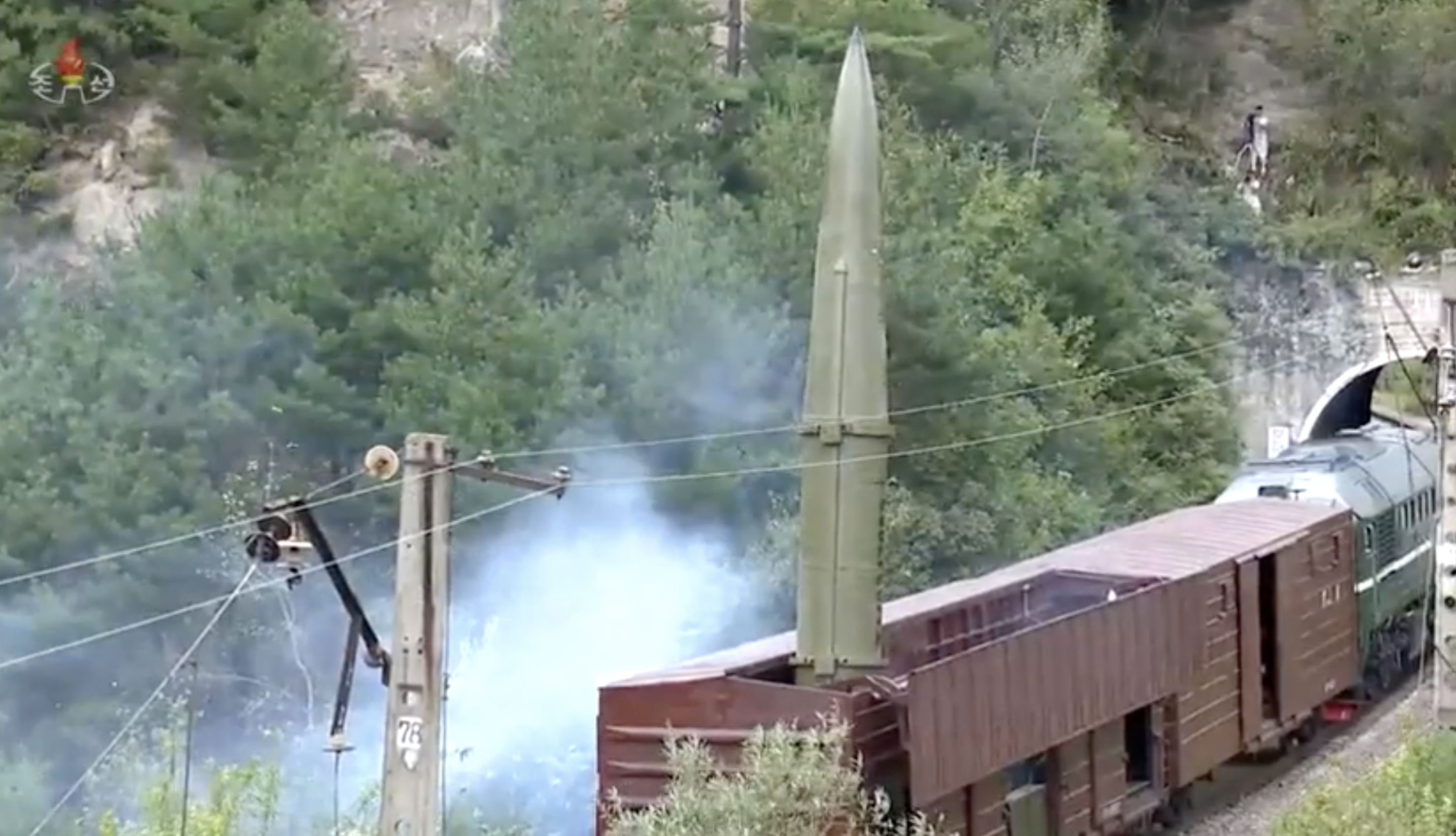 From what is currently known and confirmed regarding the current state of railcar manufacturing in North Korea, if these cars were not manufactured in a specialized facility, the Wonsan Railway Rolling Stock Complex in Kangwon-do (Kangwon Province) is the most likely factory for their construction/modification.

An unconfirmed August 2016 Radio Free Asia report appears to support this assessment by identifying production of a “mobile, long-range missile launch vehicle that uses the railway [at the] 6.4 Vehicle Factory.” According to the report, as well as author’s interview data, the 6.4 Vehicle Factory (more commonly the June 4 Factory) is the previous name for the current Wonsan Railway Rolling Stock Complex.

This description is of a larger (14-axle) and heavier (over 100 tons) class of railcar than is known to have been manufactured by the Wonsan Railway Rolling Stock Complex, other railcar manufacturing plants, or observed on North Korea’s rail network. While the North has undoubtedly explored the potential for a rail-mobile missile launcher for its larger liquid fuel ballistic missile, nothing of reliable substance is known of such efforts. Until reliable information develops, this description should be viewed with utmost caution.

North Korean media has described the test as being conducted by a new “railway-borne missile regiment [that was] created at the Eighth Party Congress in January [2021] and that there are plans to…expand the regiment into a brigade.” If this unit is an operational unit—rather than a research, testing, development, and evaluation (RTD&E) unit—what the world saw was only a portion of the regiment.

Given what little is known concerning the organization of North Korean ballistic missile units, a full rail-mobile missile regiment would likely consist, at a minimum, of a headquarters unit and two launch batteries/sections. The headquarters unit would include the regimental support units, including technical, survey, fire control, missile reload (with cranes and transloading vehicles), etc. A full launch battery/section, excluding locomotive, would likely consist of 2-5 railcars depending upon the presence of a second missile launch car. It is likely that the diesel locomotive seen in the released video was operated by the Ministry of Railroads and temporarily assigned to the “regiment” for the test launch. While exact identification of the locomotive seen in the released video is challenging, it appears to be a M65 originally manufactured by the former Soviet Union and acquired secondhand from East European countries. Additionally, it is unclear whether diesel locomotives will be permanently assigned to future railway-borne missile regiments or brigades, or be a pooled resource. 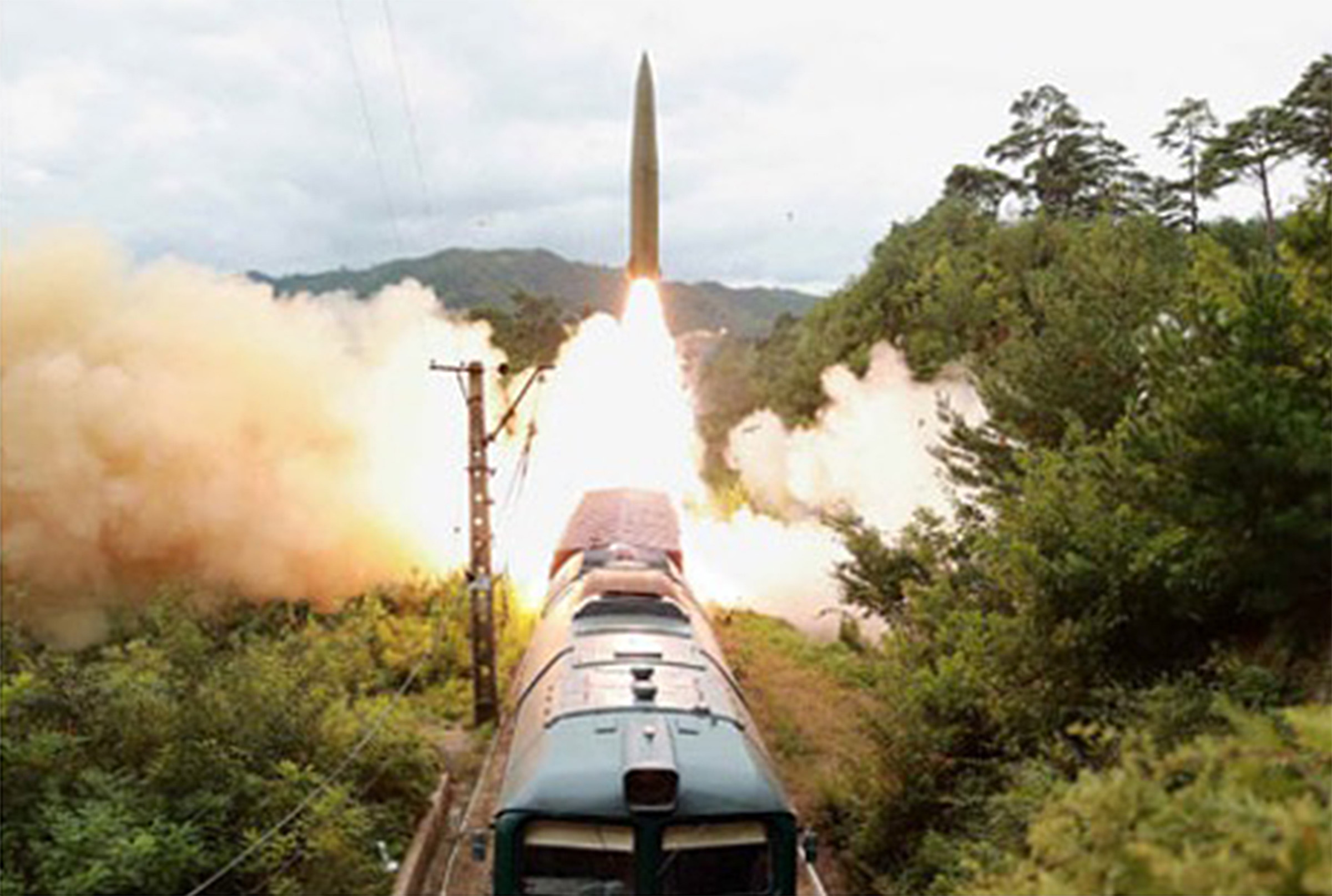 Caption: A partial view of the diesel locomotive used to move the rail-mobile launcher and crew cars during the September 15, 2021 test launch. (Rodong Sinmun)

While it is too early to imply any comprehensive understanding of North Korean strategic thought from this recent test, the media statement that the “railway mobile missile system is an effective counter striking means to deal a heavy blow at the threatening forces with dispersive firing across the country” is intriguing. It suggests that the North may view the rail-mobile KN-23 SRBM launchers as a counter strike or retaliatory force rather than a preemptive or first strike force within the context of its evolving nuclear and ballistic missile doctrines and strategies.

While the above analysis provides some preliminary background on North Korea’s development of rail-mobile missile launch platforms, technical characteristics, and observed operational analysis of the recent rail-mobile KN-23 test launch, several notes of caution are required: 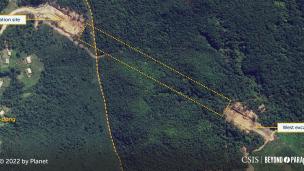 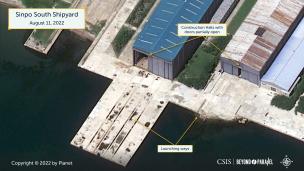 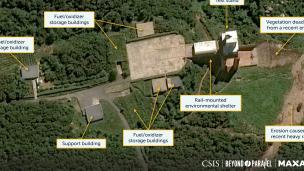 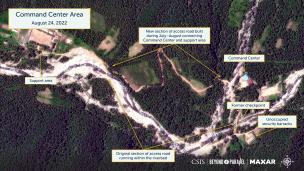 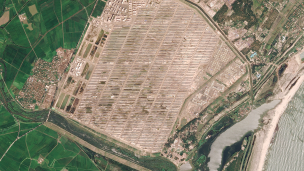 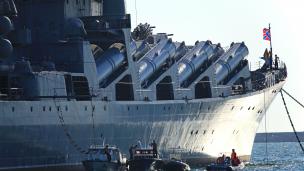 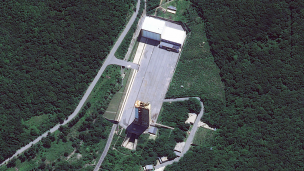 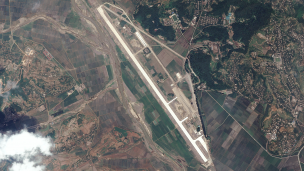