What’s Next for Venezuela?

Sunday’s mayoral elections once again confirmed the authoritarian system that rules Venezuela. Despite the deepest man-made humanitarian crisis in the region, and the highest rates of abstention in recent Venezuelan electoral history, the regime’s party claims to have won 308 out of 335 municipalities under a rigged system, supervised by a biased electoral authority. Venezuela, a formerly sophisticated and democratic country, has been kidnapped by a de facto military regime closely linked to narco-trafficking and engaged in numerous human rights abuses.

Since its founder Hugo Chavez became president of Venezuela in 1999, the Bolivarian Socialist experiment has delivered almost two decades of constantly deteriorating economic, humanitarian, and political conditions. The Venezuelan regime, under Chavez’s named successor, Nicolas Maduro, tightly controls all the country’s institutions and political leaders, now including the vast majority of governors and mayors. Securing such control has required breathtaking acts of illegality and repression. The regime has committed multiple transgressions of its own Constitution, obliterating separation of powers, after the opposition won a two-thirds majority in the National Assembly in December 2015, and packed both the National Electoral Council and the Supreme Court with regime loyalists. Last July, the regime completed the process by establishing an illegitimate National Constituent Assembly (ACN) by force and then announcing that body would have absolute power, including replacing the National Assembly.

Sunday’s election results and Venezuela’s further institutional meltdown prove the national crisis has yet to reach the end. By eliminating limitations on reelections—jailing opposition leaders and in some cases removing all their political rights, killing and injuring hundreds of protesters, suffocating the private sector, and removing authorities when they balked at the governing party outrages—the regime has flagrantly broken with the hemisphere’s democratic norms.

The international community should be prepared for worsening social and economic conditions and a further consolidation of power. Venezuela’s authoritarian system has now entered a new phase after taking over institutions, tightening social control. The government’s increased efforts to consolidate power are best exemplified by the Local Production and Supply Committees (CLAPs), the food distribution system subsidized by the government. Starving citizens line up for hours to obtain CLAP boxes, usually handed out by the human-rights-abusing National Guard, which contain basic food products, such as rice, pasta, lentils, corn flour, and oil. This system is not only becoming the official means by which Venezuelans put food on the table, but also one of the most effective tools of social control and corruption for military and government officials. 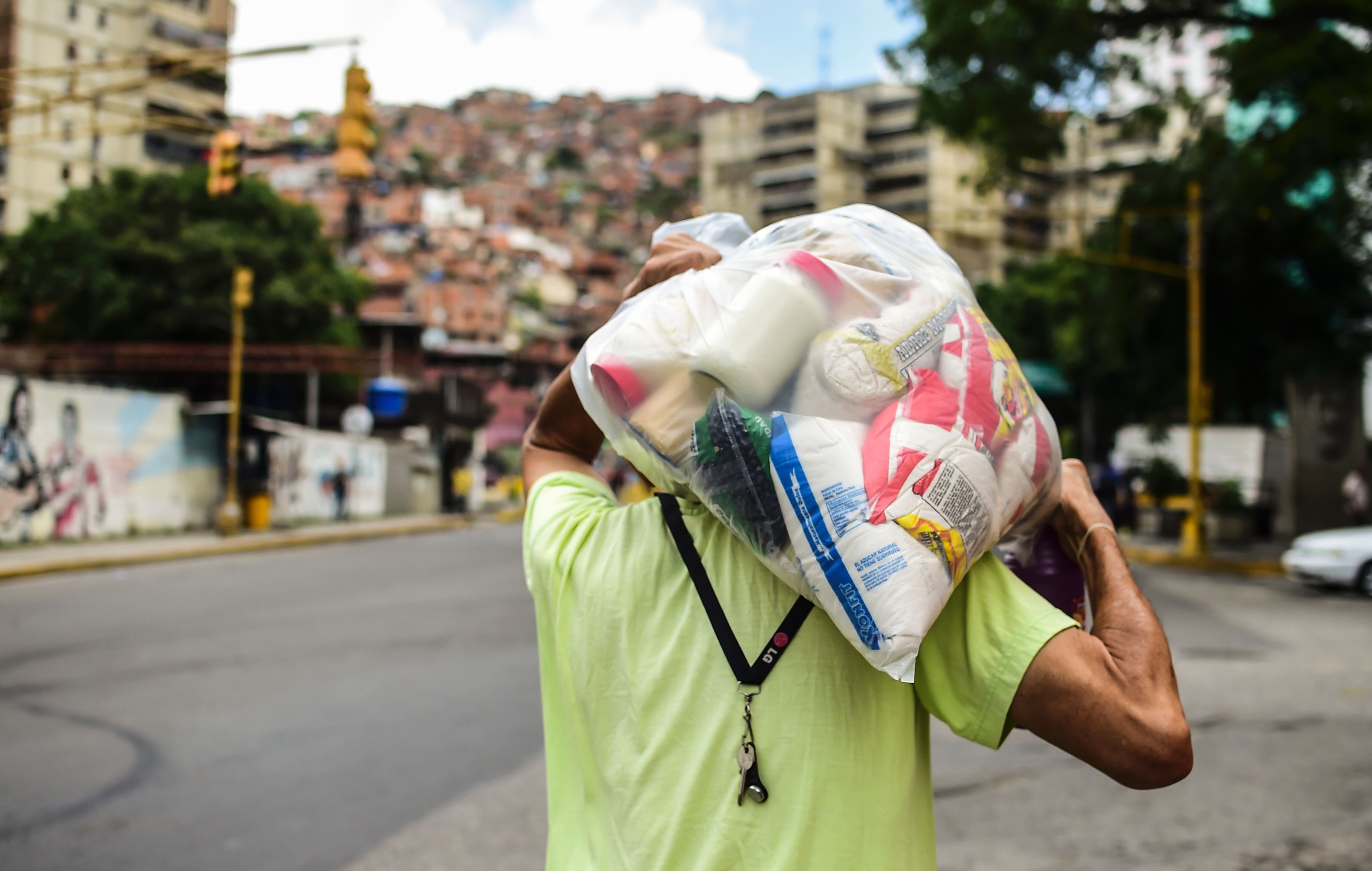 Many starving Venezuelans depend on CLAP’s bags to put food on the table, including products such as rice, pasta, lentils, corn flour, and oil. - Photo: Ronaldo Schemidt/AFP/Getty Images

Though the country’s gross domestic product has plummeted by 40 percent since 2013, and the International Monetary Fund predicts over 2,300 percent inflation in 2018, the regime’s response has been to implement a new system of political extortion of desperate and starving citizens: “Carnet de la Patria” (Homeland Identification Card). Following Cuba’s social control playbook, Venezuelans increasingly depend on this federally issued card to obtain access to basic food, public health care, universities, government jobs, and recently announced government-gifted Christmas bonuses. Maduro recently said that nearly 16 million Venezuelans, half of the country’s population, already have the Carnet de la Patria and indicated that it could be required for voting in future elections. According to a report, 2.6 million card holders voted in favor of the government in Sunday’s municipal elections because they were afraid to lose CLAP benefits. The international community, including the Lima Group, Secretary General Luis Almagro of the Organization of America States, the European Union, and North America, needs to condemn the CLAP system and further sanction those responsible for its implementation. 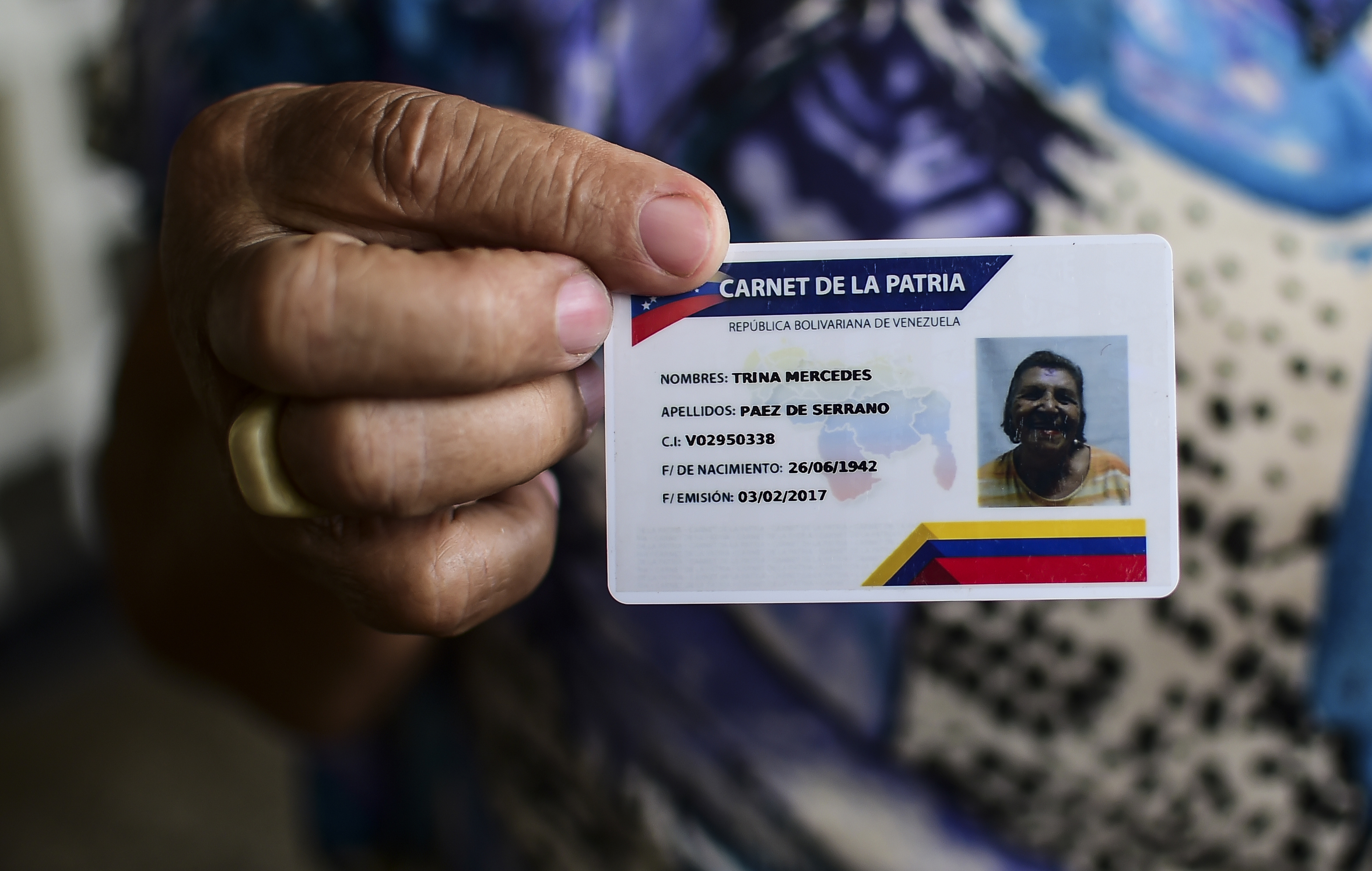 Carnet de la Patria’s main function (Homeland Card) is to keep a tight grip on nearly 16 million Venezuelan citizens seeking government assistance, including education, food, and medicine, many of whose livelihoods depend on it. - Photo: Ronaldo Schemidt/AFP/Getty Images

The opposition is as inconsistent as its leadership is divided, leading the Venezuelan people to feel both betrayed and frustrated with diminishing incentives to protest. The Mesa de La Unidad, the struggling coalition of opposition parties, is determined to engage in a new attempt to promote dialogue with the regime. But there is little reason to expect any positive outcome from this most recent dialogue process if dismantling the illegitimate National Constituent Assembly is not part of the talks. The ANC has absolute power, including the power to remove an unlikely opposition-elected president. Going forward, dismantling both the illegitimate ANC and the CLAP distribution system needs to be a priority in negotiations, along with a plan for regime exit.

The international community also needs to increase individual and financial sanctions, further limiting the Venezuelan government’s ability to continue delaying debt default, as well as deepen the divisions within the regime. Since Chavez’s death and Maduro’s transition into power, the infighting between members of the United Socialist Party of Venezuela (PSUV), the government political party, has increased. The escalating infighting and disarray within the regime became more apparent when the government jailed the Eulogio del Pino, former president of Petróleos de Venezuela, S.A. (PDVSA), along with several of his aides. That prompted Venezuelan ambassador to the United Nations and former PDVSA president Rafael Ramirez to flee to Ecuador. The Venezuelan military, led by Diosdado Cabello and linked to corruption and narco-trafficking, has taken control of the company that manages the world’s largest oil reserves, leaving National Guardsman General Manuel Quevedo at the helm. The military wing, Maduro’s last layer of defense, is winning the fight against the civilian-technocrat wing within the regime.

Not much time is left before next year’s presidential contest, in which Maduro is expected to seek reelection despite his deep unpopularity. Condemning the CLAP, increasing individual and financial sanctions, and demanding the dismantling of the ANC, needs to come urgently.

­­­­­­­­­­­­­­­­Commentary is produced by the Center for Strategic and International Studies (CSIS), a private, tax-exempt institution focusing on international public policy issues. Its research is nonpartisan and nonproprietary. CSIS does not take specific policy positions. Accordingly, all views, positions, and conclusions expressed in this publication should be understood to be solely those of the author(s).

What Does the Responsibility to Protect (R2P) Mean for Venezuela?
By Moises Rendon, Claudia Fernandez
November 17, 2020
On Demand Event

Online Event: Analyzing the Role of the European Union in Venezuela
November 9, 2020
Report

The Fabulous Five: How Foreign Actors Prop up the Maduro Regime in Venezuela
By Moises Rendon, Claudia Fernandez
October 19, 2020
Commentary

Covid-19 in Venezuela: How the Pandemic Deepened a Humanitarian Crisis
By Moises Rendon
September 23, 2020
View all content by this expert