Why Venezuela Should Be a U.S. Foreign Policy Priority

While North Korean threats involving missiles and nuclear armament ring louder and clearer than ever before, a major crisis in our neighborhood cannot be overlooked. Venezuela’s collapse is already producing security, financial, and economic risks for the United States and could trigger region-wide consequences if not stopped immediately.

Unified international action to increase pressure on President Nicolas Maduro and his inner circle is necessary, but a military intervention would be counterproductive and needlessly put service members at risk, as well as the Venezuelan people. Although President Trump stated last week that he will not rule out a military option for Venezuela, thus fueling Maduro’s rhetoric and nationalist posturing, he did put the Venezuelan crisis in the right context, as did Vice President Pence during his recent tour in Latin America: Venezuela’s collapse is a top priority for the United States, and we will not rest until Venezuela’s democracy is restored. Understanding the urgency and effectively helping to increase pressure on Nicolas Maduro is important, but a more important priority perhaps is to understand why the United States should be concerned and proactive in the face of this crisis.

The following are key reasons why the Venezuelan crisis and an ultimate peaceful solution is important for the United States.

A stronger and safer region is in U.S. best interests. Venezuela, only about 1,300 miles from Florida, is going through an institutional and judicial meltdown that threatens the stability of the region. In the past, U.S. leadership in security and development has been key for the region. Plan Colombia, which has progressed to the post–peace accord implementation stage, has been one of the most successful U.S. foreign policy initiatives in the Americas. It was driven by a real armed threat to Colombia’s democracy, as well as increased drug trafficking in a country close to the United States. If the crisis continues to escalate in Venezuela, the country could spiral into a failed state, which could trigger serious economic, financial, and security risks for its neighbors, including the United States.

The United States and its closest regional ally, Colombia, are already seeing the birth of a refugee crisis from Venezuela. Venezuelans are the largest group of asylum seekers in the United States; 18,500 people have applied for asylum in 2017 so far, mainly driven by skyrocketing inflation and homicide rates and a severe lack of opportunities and personal freedom. Over 1 million Venezuelans have moved to Colombia, and this could rapidly increase within the next months. Other neighbors, like Brazil, Guyana, the Netherlands Antilles (including Aruba and Curacao), the Dominican Republic, and others, are already implementing measures to control the flow of migrants. A Venezuelan refugee crisis could have an important economic and security impact in the region and the United States. 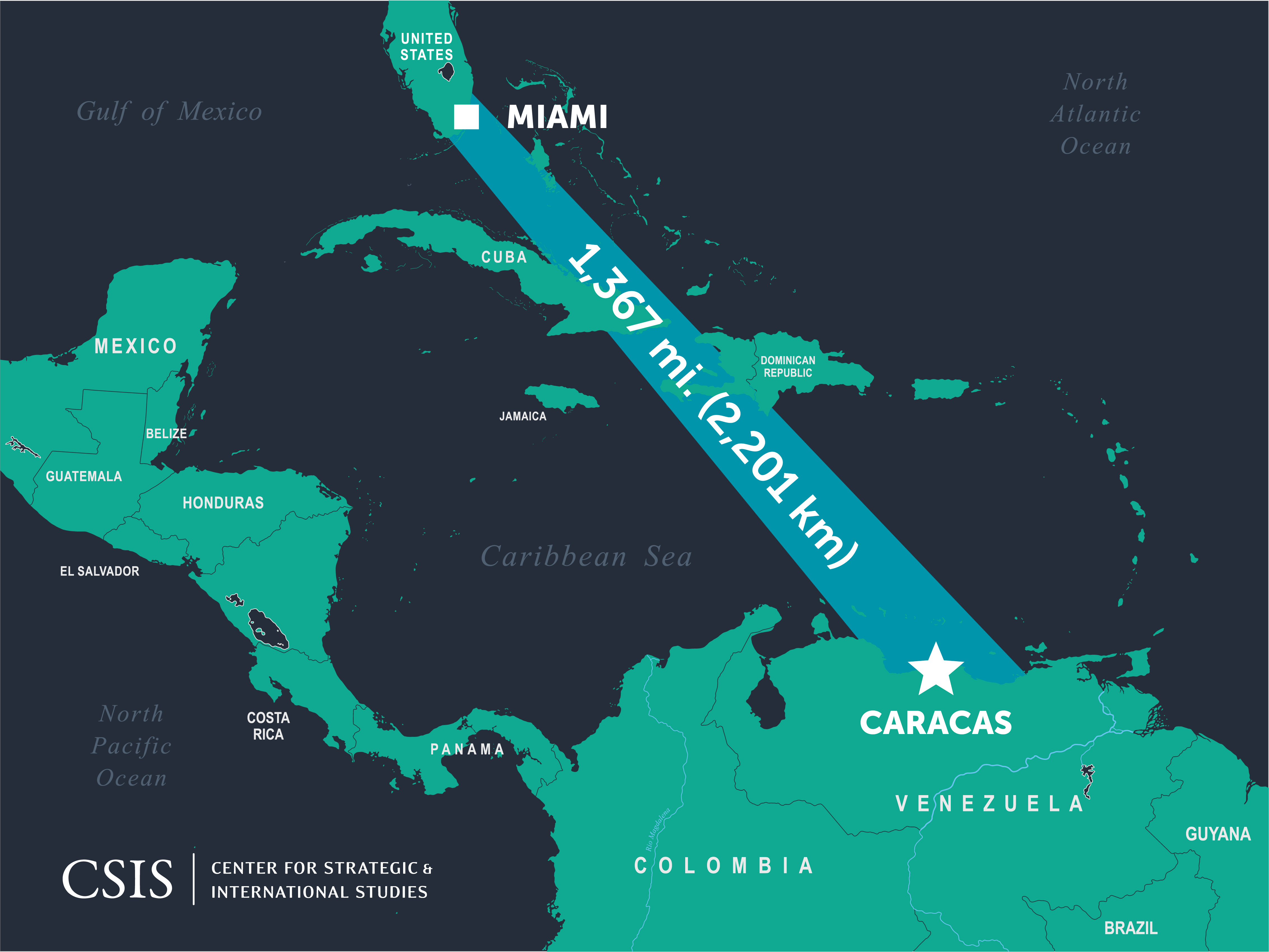 Many Venezuelan government officials are actively involved in international crime and are using state resources, including military assets or the state-controlled oil company, PDVSA, to support illicit activities such as money laundering and drug smuggling. High-level officials, including Vice President Tareck El Aissami, have been sanctioned by the U.S. Treasury Department for their drug-trafficking involvement and have collaborated with extra-regional actors such as Iran and Hezbollah.

Failing to recognize the magnitude of the drug-trafficking dilemma and the extent to which it has saturated and corrupted key institutions within the state is naïve and detrimental to regional security. Cocaine exports from South America have risen dramatically in the past three years. More cocaine is available to depart from countries in the region, and Venezuela’s political and economic corruption enables criminal networks to operate. The United States is the number one cocaine consumer in the world and therefore should have both national security and health concerns over these extremely integrated narcotrafficking links in Venezuela.

In addition, Russia, Iran, and China’s increasing presence in Venezuela should worry the United States. Venezuela has the natural resources, both oil and uranium, and the willingness to engage in arms trade and nuclear cooperation with countries that do not align with U.S. interests. In 2010, former president Hugo Chavez signed agreements with Russia to start developing a nuclear reactor. The Nuclear Threat Initiative states that, although there is no available evidence that shows the current government is interested in acquiring weapons of mass destruction, there are some proliferation concerns. China not only has over $60 billion in loans and investments in Venezuela, but also sees Venezuela as a strategic location.

Venezuelans lost an average of 19 pounds each over the past year due to a lack of food. Severe shortages of food and other goods make it difficult for most people to obtain adequate nutrition and cover their families’ basic needs. Medicines have become luxury items for all except those in power. Hospitals lack key instruments and drugs, such as stretchers and morphine. Epidemics, like malaria, have risen exponentially, by over 300 percent compared to the 1990s. But the government lacks the political will and capacity to deal with the current health crisis.

There are serious tactical realities in the Venezuela-Cuba nexus. The Cuban government remains an ideological authoritarian regime with a presence throughout Venezuela and the region. The Bolivarian Alliance for the Peoples of Our America (ALBA) was created with Venezuela’s oil, and a heavy dose of Cuba’s ideology, to consolidate regional political integration based on a vision of social welfare and “anti-imperialism.”

As Vice President Pence’s recent tour in Latin America shows, the United States has strong interest in working with its allies throughout the region. As Venezuela’s neighbors try to increase pressure on Maduro by signing a joint declaration in Lima that includes, for example, a statement not to recognize the illegitimate constituent assembly, the broader strategic threat to U.S. interests from an anti-American Venezuela with the world’s largest proven oil reserves (25 percent of global reserves) cannot be ignored.

Historically, Venezuela has been a reliable partner for the United States when it comes to oil shipments. Although U.S. oil dependency has decreased due to increased domestic oil production, as well as the development of alternative energy resources, Venezuela remains a country with the resources and proximity to be a strategic trade partner with the United States and a privileged destination for U.S. investments if the crisis comes to an end.

The July 30 illegitimate constituent assembly, which is imposing a totalitarian “communal” system in Venezuela, is currently taking new actions that would change Venezuela dramatically. However, Maduro lacks support from the vast majority of the people and the international community, aside from Cuba and a few Caribbean nations who accept copious amounts of oil. Maduro’s last line of defense, the military, might also be getting cold feet on whether to continue to support a regime that is pushing the country to the brink of collapse. The international community still has the opportunity to pressure Maduro and help Venezuela find a path toward freedom and rule of law, but the window of opportunity is closing.

The two main drivers that will influence the outcome of the crisis are the degree of the regime’s internal instability and the degree and types of external pressure or assistance the regime receives from key international actors. In a recent Huffington Post article, I laid out the key steps the United States and the international community should consider to help Venezuela. If international action doesn’t come soon, fast-forward a few months, and Venezuela could become a “North Korea in the tropics.”

­­­­­­­­­­­­­­­­Commentary is produced by the Center for Strategic and International Studies (CSIS), a private, tax-exempt institution focusing on international public policy issues. Its research is nonpartisan and nonproprietary. CSIS does not take specific policy positions. Accordingly, all views, positions, and conclusions expressed in this publication should be understood to be solely those of the author(s).