By Scott Kennedy and Shining Tan

Few companies on this planet are as controversial as Huawei. Figuring out how Western industry and governments should respond to this daunting commercial and security challenge is no mean feat. This post discusses two kinds of challenges to developing and implementing an effective strategy. The first is the fact that just the mention of Huawei invokes strong passions, making it difficult to have a reasoned and dispassionate national debate. The second is insufficient familiarity with how Huawei has grown and evolved, especially over the last decade, complicating how one would effectively confront and manage the risks it poses.

Last year, we hosted a debate at CSIS, “Should the United States Severely Restrict Huawei’s Business?” Both sides made impressive arguments, but the in-person audience chose the “Yes Team” over the “No Team” 56% to 44%. A subsequent Twitter poll taken just after the event was even more definitive in favor of tough measures (82% yes, 18% no). In late April 2020, I again asked Twitter whether the United States should block the sale of semiconductors used in Huawei’s 5G equipment; respondents were still in favor of restrictions (59.8%), but at a rate closer to the in-person poll from a year prior than the first Twitter poll. Obviously, answers are affected by the way the question is posed and the evolving context. My sense is that the level of concern about Huawei in the United States is sky high, with general acceptance of doing almost anything in the name of protecting U.S. national security. But there still is no consensus on exactly how to proceed, in part because there is still insufficient information about Huawei in the public realm, and in part because the U.S. is struggling to develop a broader framework toward managing its relationship with China in which to fit the Huawei challenge.

This week our program issued a policy brief, “Washington’s China Policy Has Lost Its Wei,” which argues that the Trump administration’s strategy to isolate Huawei and decouple from China in high-tech is likely to achieve the opposite of its advocate’s goal, actually harming the American economy and our national security rather than strengthening them. Instead, we propose that the United States pursue a strategy of “principled interdependence,” which we believe would more effectively mitigate the real risks posed by Huawei and China’s high-tech drive while also benefitting to the fullest extent possible from commercial interaction with China and being part of a dynamic global economy.

Our position does not accept unconditional engagement with China, because we believe the national security risks posed by Huawei and China’s high-tech drive are very real and tangible. As evidence, see this June 2019 report by Finite and a broader analysis by a U.S. State Department official from September 2019. To ignore or minimize these risks would be to abandon the principles of “principled interdependence.” In contrast to unconditional engagement advocates, we propose a range of limits, including restricting the sale of Huawei 5G equipment and other broader limits in technology exports and investment, when necessary to protect national security. However, unlike decoupling advocates, we do not believe in the fundamental assumption, that the less connectivity there is with China, the better it would necessarily be for American national security. This is a debatable assumption, and to the extent that our work starts a genuine conversation in Washington over this, it will have served its purpose.

Economic interaction with China has brought us tangible national security benefits, and I believe there are ways to continue reaping those benefits while also managing the real risks we face. I discuss a variety of ways to mitigate those risks, some already in use, others still in development. Hence, unlike decoupling advocates, our approach tries to embed pragmatic restraints within a broader framework that recognizes the benefits to our economy and national security if we can build a relationship consistent with our standards for fair commerce and the need to protect us from a wide range of risks.

Our analysis on the pros and cons of various policy options recognizes that Huawei is quite formidable. A range of actions, both fair and unfair – for which it may be impossible to disentangle their relative importance – have made the company of almost 200,000 employees an imposing global force. The evidence we present here is not meant to heap praise on Huawei or show admiration for the company, but rather to highlight that this is a major challenge and that a simplistic strategy of trying to put the company out of business is unrealistic.

Most people know Huawei is based in Shenzhen, situated in between Guangzhou to the northwest and Hong Kong to its south; but only a small number of Americans have ever visited the company. 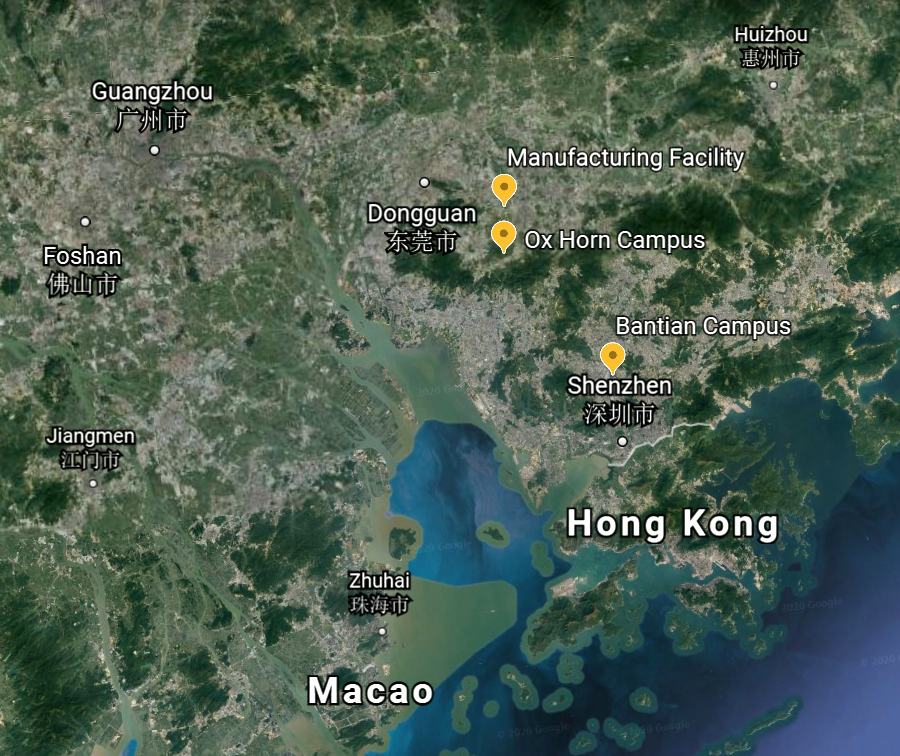 It may be easier to understand the geography by viewing this video for an aerial perspective of the campuses.

For a third perspective, if we move from the air to the ground, here are some recent photos taken during campus visits. The Ox Horn Campus is divided into 12 sections, each modeled on a different famous landmark in Europe. (For additional video, click here.)

Huawei has become the dominant player in telecommunications equipment for commercial networks and mobile telecom carriers. Although its market share in North America is quite low, its 4G equipment is widely installed throughout Europe (Figure 4). Even in Sweden, home to competitor Ericsson, Huawei has 58% market share, and a whopping 81% in neighboring Norway. (By contrast, in Finland, home to Nokia, Huawei has a mere 12% of the 4G market.) One of the sources of conflict between American and European perspectives is over the difference in existing installed equipment and the potential costs of a “rip and replace” solution. 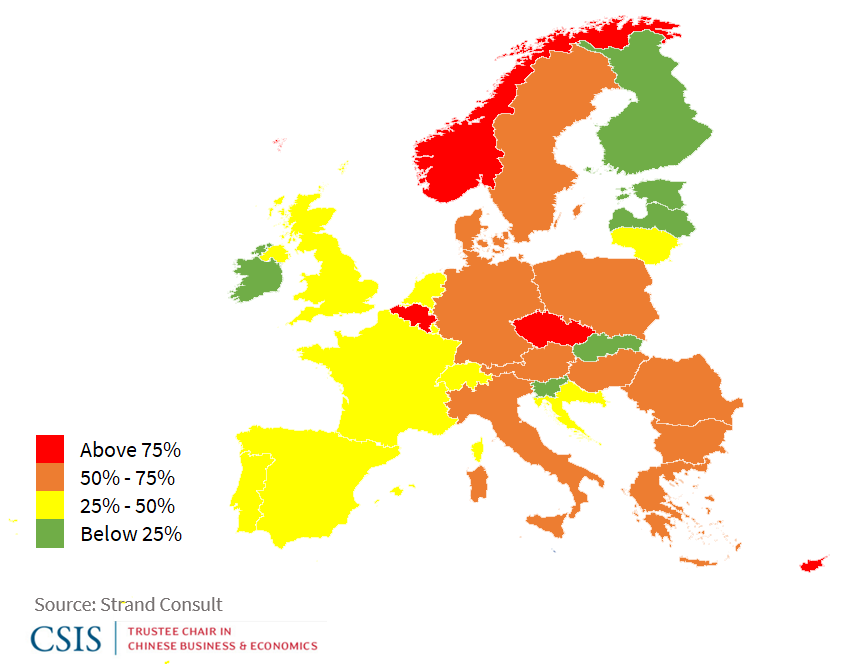 Huawei’s business has a comprehensive geographic footprint (Figure 5). Given that only 6.1% of its business comes from the Americas, denying access to the U.S. market has not put a significant dent in its revenue. By contrast, Europe, the Middle East, Africa (EMEA) and the Asia-Pacific account for over 32% of its revenue. As a consequence, any effort to shrink its business would have to attract wide support from countries on multiple continents. 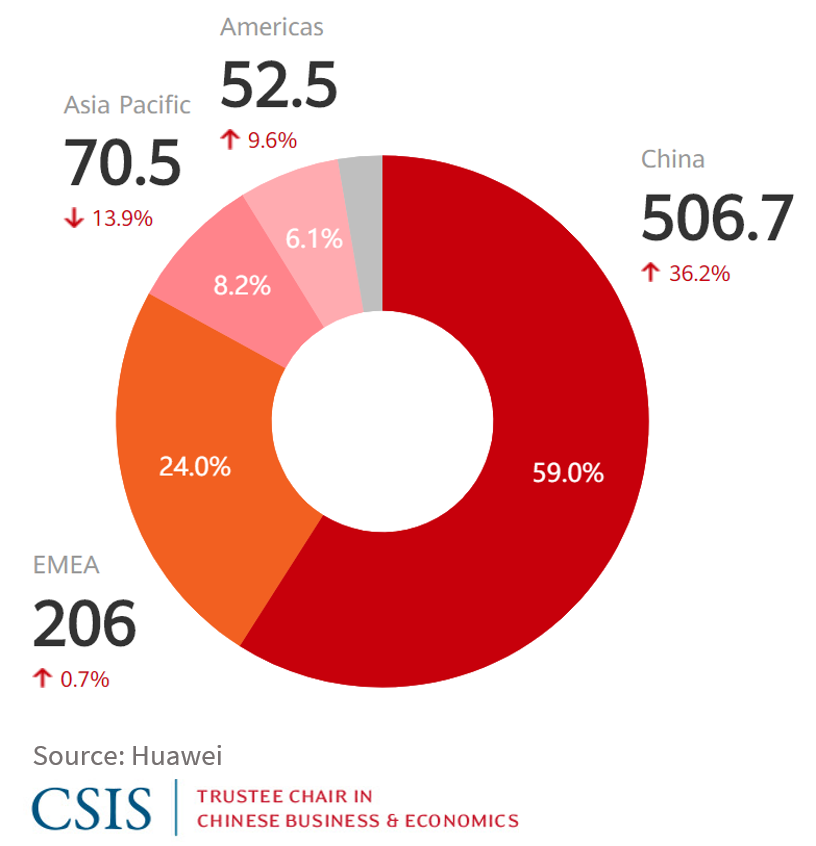 In addition to doing business everywhere, Huawei has diversified its portfolio, going from focusing on telecom equipment to providing cloud services, manufacturing chips, and developing downstream business directly with consumers. In fact, as Figure 6 shows, the latter now accounts for over 54% of its annual revenue, with the carrier business down to under 35%. 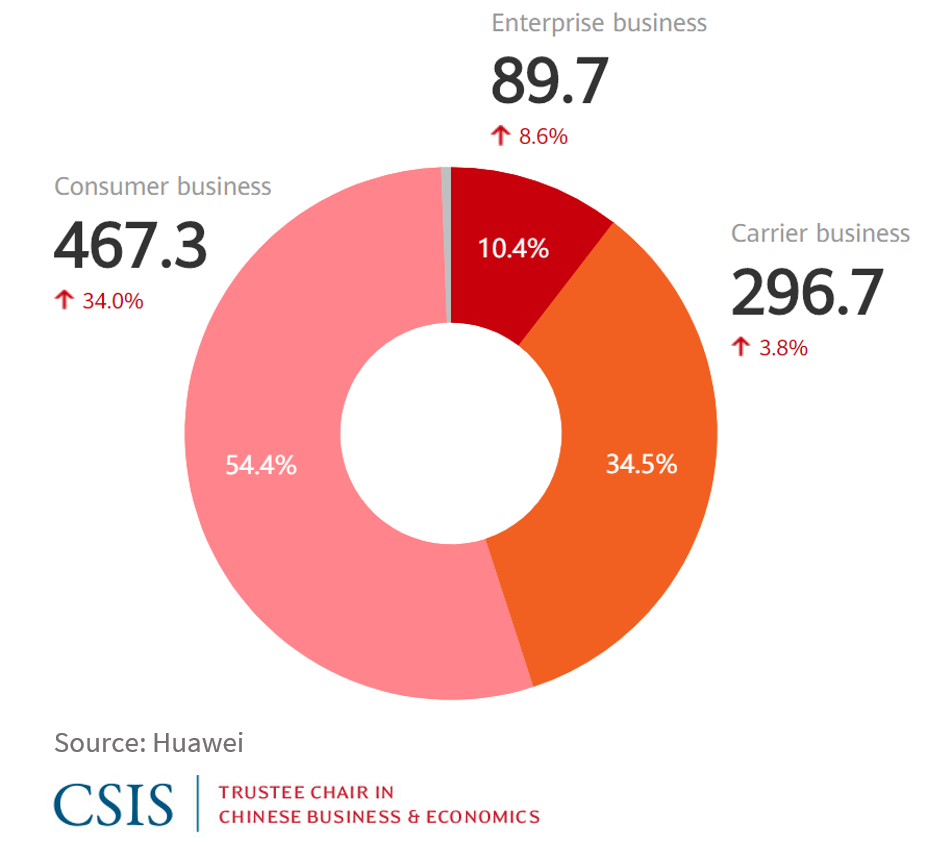