Erskine Bowles is a native North Carolinian, born and raised in Greensboro. He is a graduate of the University of North Carolina and received his M.B.A. from Columbia University in New York. After serving as an enlisted man in the U.S. Coast Guard, he began his financial service career at Morgan Stanley in New York as an associate in the corporate finance group. He left Morgan Stanley to form a middle-market investment bank, Bowles, Hollowell, Conner, which became the preeminent mergers and acquisition firm in the middle market. He would later form a venture capital firm, Kitty Hawk Capital; cofound a middle-market private equity firm, Carousel Capital; and serve as a partner in the New York private equity firm of Forstmann Little. During his business career, he has also served on the boards of various companies, including Morgan Stanley, First Union Corporation, Merck, VF, Cousins Properties, Norfolk Southern Corporation, General Motors, Belk, Urban Institute, Tri Alpha Energy and Facebook. In 1991, Mr. Bowles joined the administration of President Bill Clinton as administrator of the Small Business Administration. In 1993, he was brought to the White House to serve as President Clinton’s deputy chief of staff and later as chief of staff. As chief of staff, he served as a member of the president’s cabinet, the National Security Council, and the National Economic Council. Working at the direction of the president and with the Republican House of Representatives and Senate, Mr. Bowles negotiated the first balanced budget in a generation. During his tenure in the White House, he also coordinated the federal response to the Oklahoma City bombing. In response to the tsunami that struck Southeast Asia in December 2004, he was asked to join the United Nations as deputy special envoy, with the rank of under secretary general, to coordinate the global response to the tsunami. In 2010, President Barack Obama asked Mr. Bowles to cochair, with former senator Alan Simpson, the National Commission on Fiscal Responsibility and Reform. This bipartisan commission produced a plan to reduce the nation’s deficits by $4 trillion over the next decade. The plan was supported by a supermajority of the commission with equal support from both Republican and Democrat members. Mr. Bowles has also served his home state of North Carolina in numerous ways. From 2005 to 2011, he was president of the University of North Carolina, an institution with 17 campuses, 220,000 students, 40,000 employees, and an annual budget of approximately $8 billion. He has also served as a board member of the Golden Leaf Foundation, the Duke Endowment, the Carolinas Medical Center, and founded a private equity company to bring investment capital to rural North Carolina. 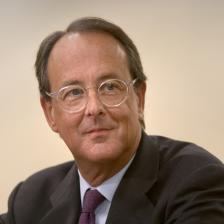