This program is no longer active.
A series of discussions in the run-up to the MDG Summit.


CSIS, as part of its Global Challenges series in collaboration with the University of Miami, will host a series of four discussions in the run-up to the MDG Summit.  Each session will look at one critical millennium development goal and will examine likely summit outcomes and long-term prospects for progress.  The series will kick-off on September 7th with an address by Melanne Veveer, Ambassador-at-large on Global Women’s Issues on “Making the Most of the MDG Summit: Advancing Progress through the Empowerment of Women and Girls.”  Subsequent sessions will focus on: HIV/AIDS, Water, and Food Security.

Subsequent sessions will focus on:

Water – September 16th, 9:00am to 10:30am,
Featuring Seema Manghee, Senior Water and Sanitation Specialist at the World Bank
and Dr. John Borrazzo, Chief of Maternal and Child Health Division at the Bureau for Global Health, USAID

During this session, Seema Manghee and John Borrazzo will discuss water and sanitation in the context of the upcoming UN Summit on the Millennium Development Goals

Food Security – September 16th, 11:00amm to 12:30am,
Featuring Dr. Vera Songwe, Advisor to the Managing Director at the World Bank
and Allan Jury, Director of U.S. Relations at the World Food Program

During this session, panelists will discuss where the world is meeting on MDG 1, eradicating extreme hunger and poverty, and will address questions including: How will hunger issues be addressed at the Summit? Between now and 2015, what are the aspirations for accelerating progress? And what are we likely to see coming out of the Summit?

During this session, Dr. Larson will preview the findings of the aids2031 Project to be released later this year and will reflect on how the Project's recommendations can help inform progress towards and beyond the MDGs.

To learn more about each event and to register on line, click here: http://smartglobalhealth.org/mdgs 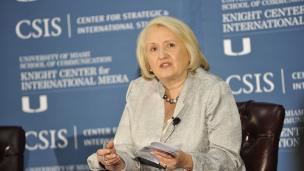 Ambassador Melanne Verveer on "Advancing Progress through Empowerment of Women and Girls"
September 7, 2010
View all content associated with this program