President Putin’s motives in deploying the equivalent of an invasion force on the border of the Ukraine may be limited to an effort to stop the expansion of NATO and U.S. military aid to the Ukraine. They also, however, may have a much broader set of long-term strategic goals. This commentary examines how the Russian effort to expand its influence in the Ukraine and to deny it membership in NATO or any added U.S. military support may be part of a broader effort that includes Belarus and presents a much more serious longer-term challenge to NATO.

A broader look at the map of Europe before and after the break-up of the FSU and the Warsaw Pact in 1991 makes it clear why Putin may see Russian efforts to gain influence or control over Belarus and much of the Ukraine as a major strategic objective.

Map One shows the level of de facto Russian control before the breakup of the FSU. Russia then dominated Eastern Europe in areas which allowed it to pose a major threat of invasion to all of Europe, including to the most developed states in the region. Moreover, even if one excludes key Warsaw Pact states like East Germany, Poland, Czechoslovakia, Hungary, and Bulgaria, Russia’s control over Belarus and the Ukraine gave it strategic access to the entire Central Front in Europe as well as control over the Baltic states.

Russia had control over the economies and military resources of most Warsaw Pact states as well as a far larger Soviet Union. To put these changes in perspective, the Former Soviet Union had a GDP of some $2,042 billion in 1990. In contrast, Russia only had a GDP of some $460 billion in 1992 – which then compared with $2,132 billion for a united Germany and $1,401 billion for France. The FSU also had a total population of 290.5 million in 1991, while Russia only had a population of 148.5 million in 1992.

Comparing the size of the FSU armed forces versus those of Russia is difficult because of the complex transitions and force structure involved and because Russia has stored so much of the weaponry that was used in active forces in the FSU. However, if one looks at the International Institute for Strategic Studies (IISS) estimates for calendar year 1991, the FSU had some 3,400,000 active forces and 5,239,000 reserves. It had some 1,400,000 ground forces; 20,725 active main battle tanks; 14,400 artillery weapons; 4,950 combat aircraft; 2,050 armed helicopters; 317 submarines; and 218 principal surface combatants. It also had a defense budget that the IISS estimated was $238 billion in 1991 dollars and an official defense budget of $171.9 billion.

Gaining Strategic Control Over Belarus and Possibly the Ukraine

Map Two shows the present strategic situation in Europe, the growth of NATO since 1991, and the major reductions in Russia’s presence in the central region. Seen from Putin’s viewpoint, and those of any hardline Russian nationalist, his efforts to prevent the Ukraine from receiving U.S. military aid and joining NATO have a clear strategic justification.

Seen from that perspective, Russia not only needs to react to the loss of the Warsaw Pact nations to NATO, but to the loss of the Soviet States like the Ukraine and Belarus that many Russians still consider to be parts of Russia. Moreover, while Russia still has an enclave in Kaliningrad, it has lost the Baltic states and has seen the Scandinavian states become more independent and some openly come closer to NATO.

Coupled to the force cuts described earlier, these massive shifts in the strategic map of Europe cuts illustrate why one needs to be careful about focusing on the Ukraine alone. Putin may well have much broader long-term strategic objectives. Russia has already annexed the Crimea in 2014, used “little green men” to take de facto control over part of the eastern Ukraine, steadily expanded its influence and military exercises in Belarus, used military exercises and other measures to show how effectively it can threaten the Baltic and Scandinavian states, made a major arms sale to Turkey, and gained air bases and a naval base in the Mediterranean in Syria.

Like China, Russia has also engaged in economic challenges, spoiler operations, and out of area operations. While the importance of the Nordstream 2 and other gas pipelines to Europe should not be exaggerated, Putin has to see the use of such civil resources as giving Russia another element of strategic leverage. At a very different level, so does his emphasis on new nuclear delivery systems, on hypersonic and other long-range conventional strike systems, on expanding major military bases and exercises in the forward area in Russia, and on renewed Russian naval and air activity – including steadily increasing joint exercise and other military activity with China in the far east.

At a minimum, Putin seems extraordinarily unlikely to give up the Crimea or his ongoing military buildup in the forward areas of Russia. He may well see a limited nuclear arms race, coupled with long-range precision conventional strike systems, as a key and relatively inexpensive way to counter U.S. and NATO military capabilities and to restore Russia’s military and strategic prestige.

Making Belarus the equivalent of a client state now seems to offer a major opportunity – and one that does not present the political and economic challenges of more active military action in the Ukraine. At the same time, pushing Russian pressure on the Ukraine to the limits imposed by the U.S. and Europe offers at least some prospect of restoring Russian control or at least preventing the Ukraine from becoming stable or joining as a NATO partner.

He also has to welcome the divisions within NATO, the diplomatic tension between the U.S. and France, the discussions of “European” and EU military options as a substitute for NATO, and the American emphasis on burdensharing rather than effective deterrence. These all offer Russia additional opportunities – as do the failures of many former Warsaw Pact states in NATO to modernize their military forces and make them properly interoperable. (These issues are explored in depth in a separate analysis: Strengthening European Deterrence and Defense: NATO, Not European Defense Autonomy, Is the Answer, which is available on the CSIS website at https://www.csis.org/analysis/strengthening-european-deterrence-and-defense-nato-not-european-defense-autonomy-answer.)

Looking At – and Beyond – Ukraine

In short, important as the measures President Biden and others have already taken to deter immediate Russian action in the Ukraine are, the U.S. and NATO need to look at the broader picture and see a potential strategic challenge that goes far beyond a single crisis. It is the broader patterns in Russian strategic competition that count, and continued political and gray area warfare with Russia now seem all too likely.

The U.S., in particular, needs to look beyond China and see how critical NATO and strategic partnerships with Europe really are. The must move firmly away from burdensharing bullying and focus on effective collective deterrence and defense. It also needs to realize that Russian willingness to exploit opportunities for spoiler operations in the Middle East, Artic, and Africa – and arms sales to nations like Egypt, India, Iran, and Turkey – can be as critical as the similar efforts by China. Both Russia and China are far more than direct regional competitors and potential threats – they are global ones as well.

Map One: Russian Strategic Control before the Break-Up of the Former Soviet Union (FSU) 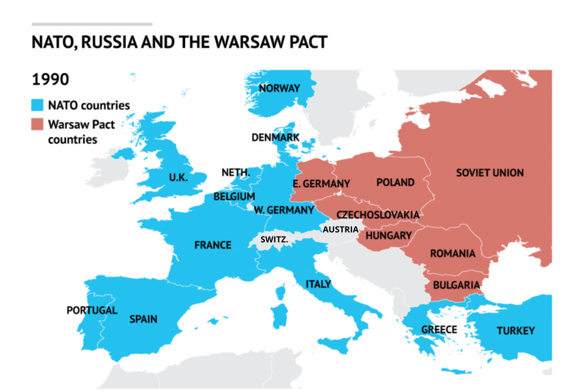 Source: Adapted from “NATO, Russia and the Warsaw Pact,” 2015, Rane

Map Two: Russian Strategic Control After the Break-Up of the Former Soviet Union 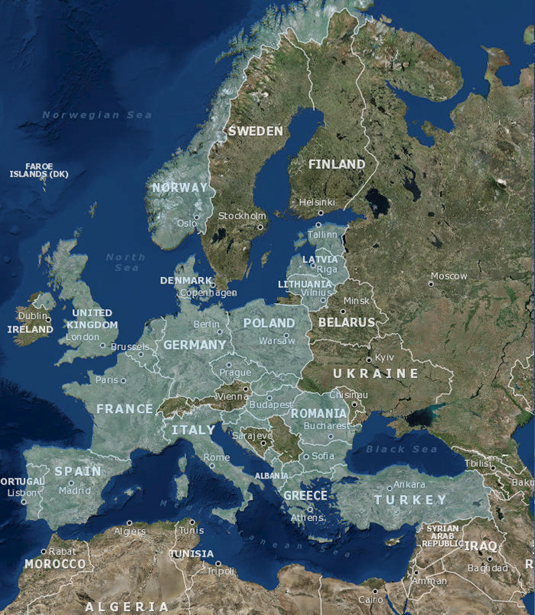 This commentary entitled, Looking at the Broader Risk: Russian Control Over the Ukraine and Belarus, Its Impact on NATO, and Competition on a Broader Level, is available for download at https://csis-website-prod.s3.amazonaws.com/s3fs-public/publication/211208_Cordesman_Broader_Risk_0.pdf?m_6TtrhCgByMuSy4BcETJfYPtXSLmZGi.