Coal accounted for 44 percent of energy-related CO2 emissions in 2016, even though it provided 27 percent of the world’s primary energy. The world needs to either curb coal use or develop technologies that limit carbon emissions from coal to meet its climate goals. In policy circles, this challenge is often framed around specific countries—the need for Germany, China, or the United States, for example, to reduce coal use. But this conversation, while essential, tends to underrate how much of the world’s coal challenge is now an Asian challenge. Unless Asia can find other energy sources to meet its needs, our efforts to curb CO2 emissions from coal will likely fail.

The shift of coal demand to Asia is seen in numerous data points. According to the BP Statistical Review of World Energy, the Asia Pacific region consumed 75 percent of the world’s coal in 2017, up from 50 percent in 2000. This share is higher than for any other fuel or energy in general: 36 percent for oil, 21 percent for gas, and 42 percent for overall energy. More importantly, Asia is the main driver of growth: demand for coal outside Asia peaked in 1988 and has since fallen by a third. In that same period, coal demand in Asia has risen by 3.5 times. 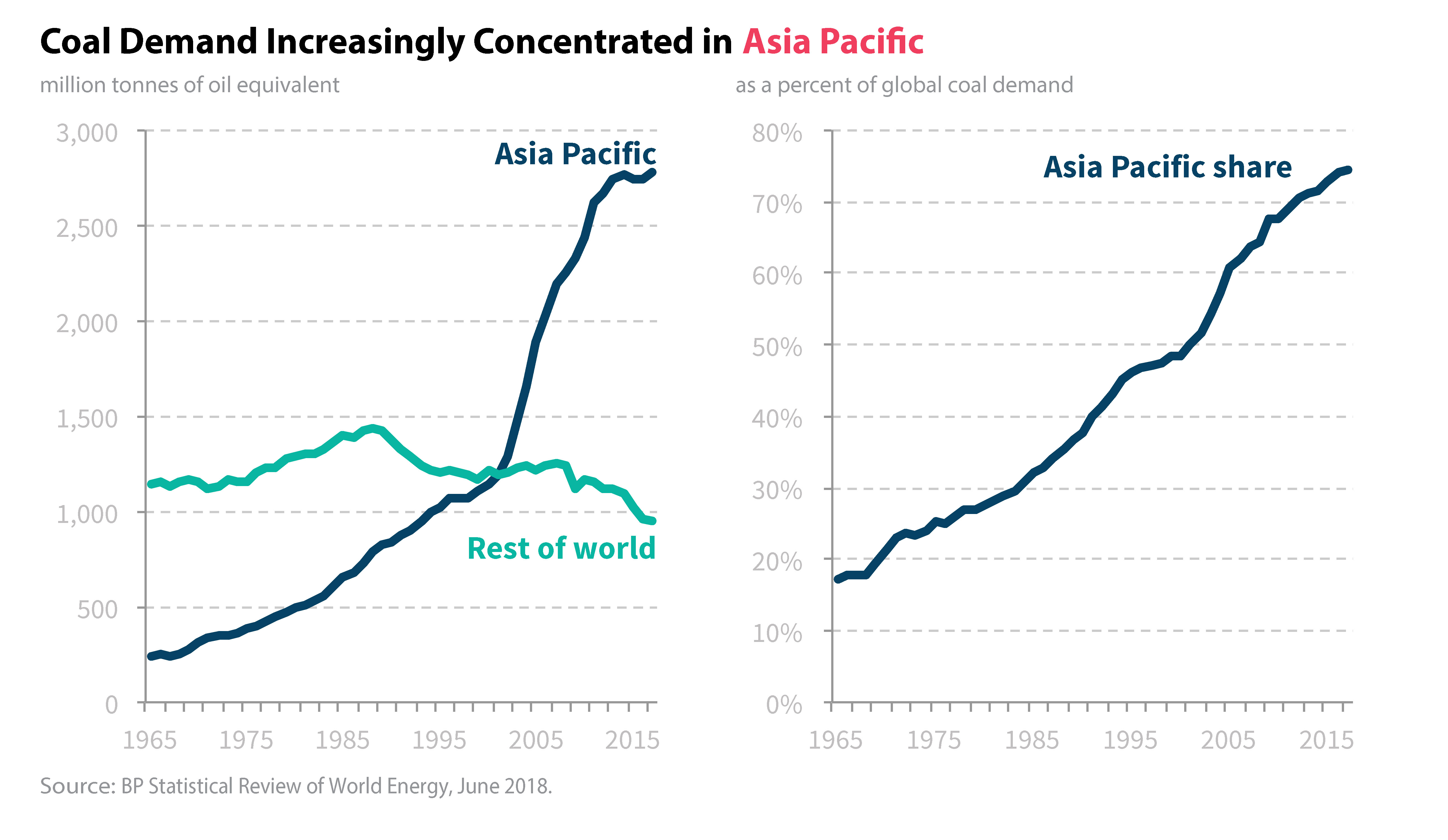 Demand outside Asia has fallen, although that decline is uneven. In North America, coal at most provided 22 percent of primary energy (in 1985). But coal use in North America rose by 83 percent from 1975 to 2005 before falling by almost 40 percent, largely due to cheaper gas and renewables. The pattern in Europe and the former Soviet Union is similar: growth in the late 1970s, followed by a steep decline in the late 1980s and 1990s. In the former Soviet Union, demand has since stabilized; in Europe, it has kept falling slowly. In these three regions, coal now provides 13 to 16 percent of primary energy. Beyond these areas, South Africa is the largest consumer, accounting for more than 60 percent of that remaining demand. Brazil, Chile, Colombia, and Israel are the other major users. Coal is a marginal fuel everywhere else. 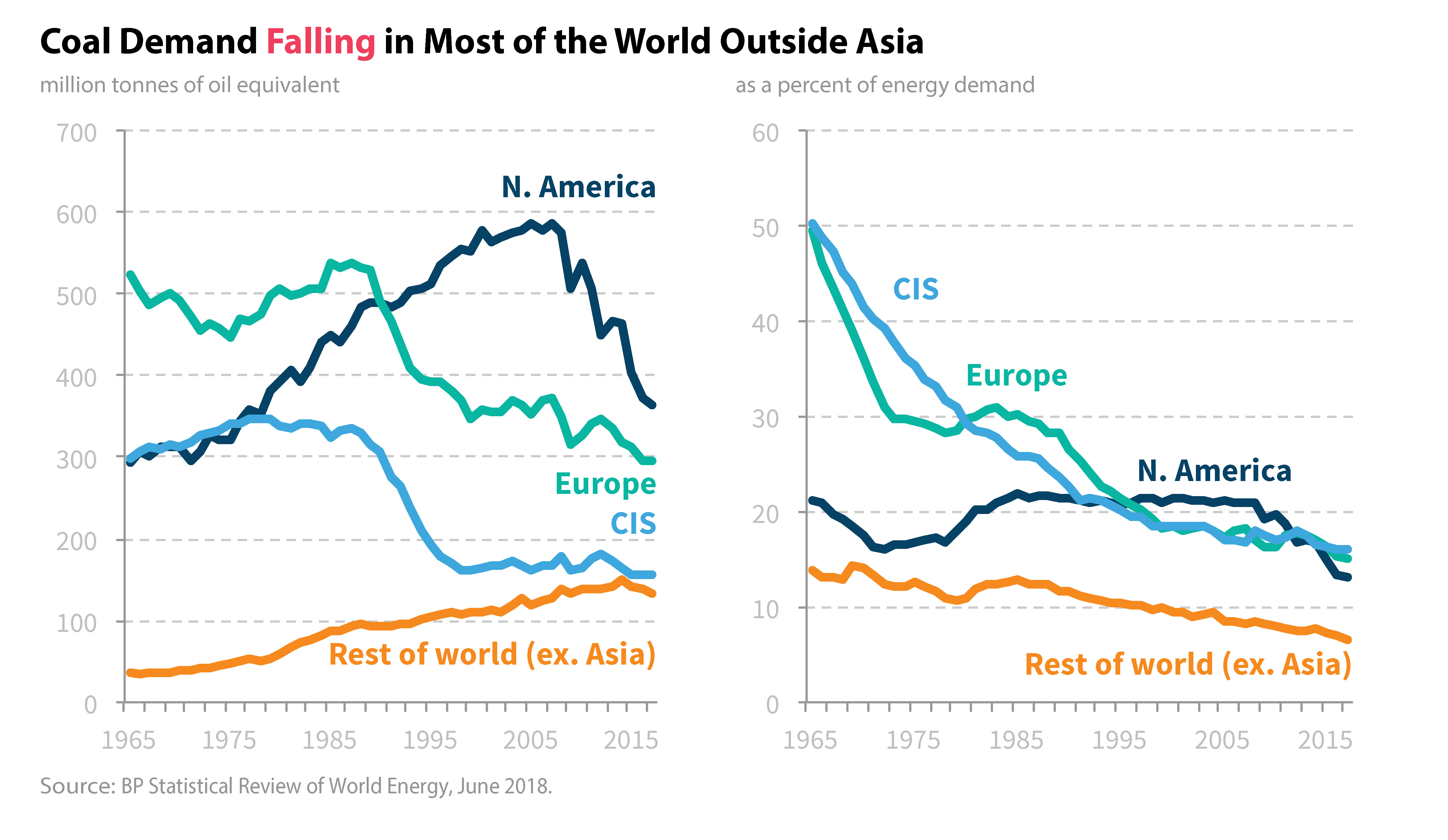 Asian demand is dominated by China, whose consumption has weakened in recent years (down 4 percent relative to the 2013 peak). But demand outside China is growing. In part, this is due to India, although its coal use is still less than a fourth of China’s. Among the countries in the Organization for Economic Co-operation and Development (OECD), demand is falling in Australia, rising in Korea and remaining near all-time highs in Japan. Together with New Zealand, these countries make up 10 percent of regional coal demand—with modest growth. 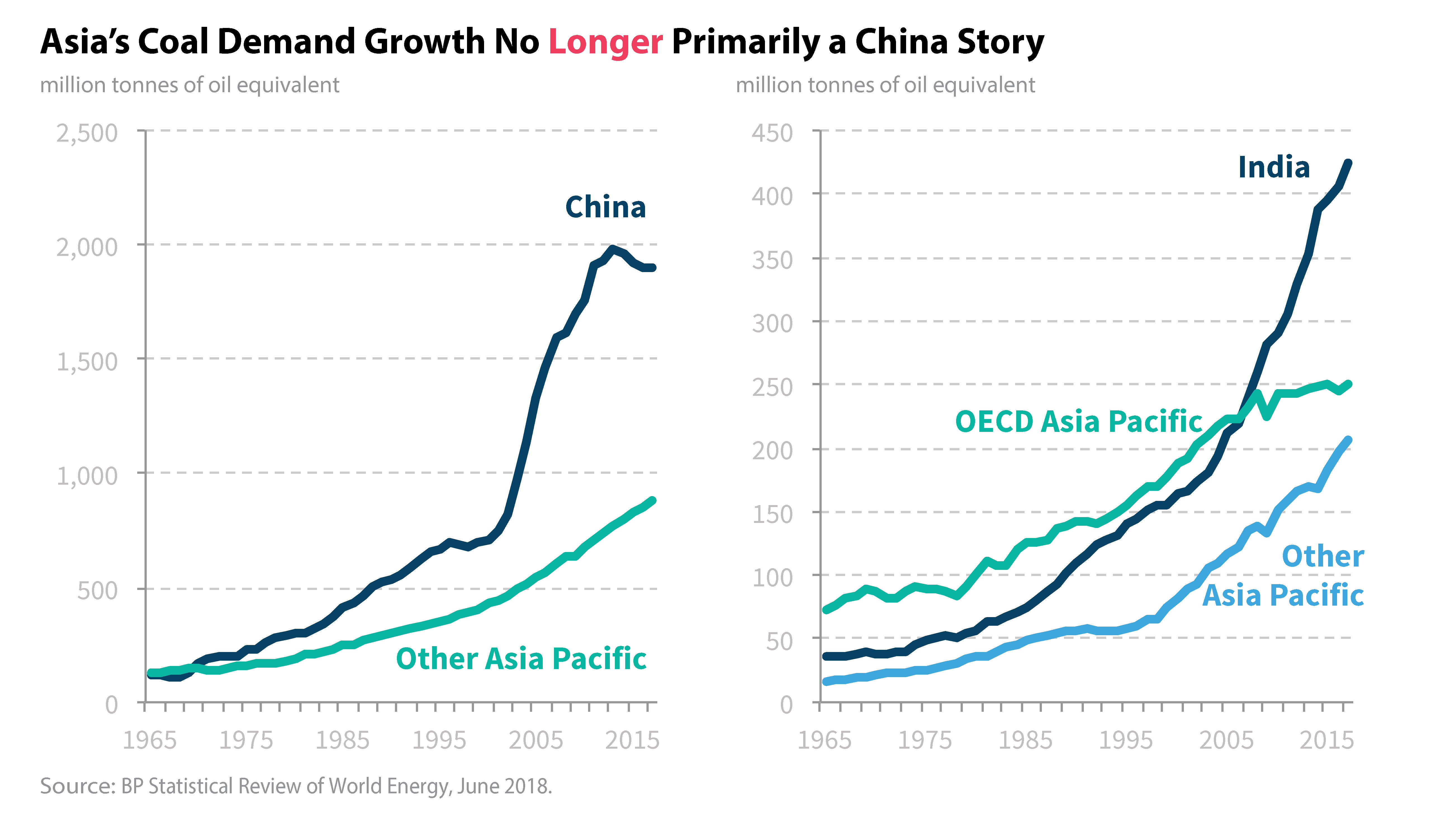 The most dynamic part, however, is the rest: a group of countries that includes Indonesia, Taiwan, Vietnam, Malaysia, Thailand, Philippines, Pakistan, and others (ordered by 2017 demand). Demand in that sub-group rose 45 percent in the last decade. Soon, this region could surpass the European Union, whose demand was 13 percent higher in 2017. Indonesia now consumes more coal than Poland, and in a few years, it might overtake Germany. Indonesia and Vietnam together use more coal than South Africa, and Vietnam’s coal use has more than quadrupled since 2007. Malaysia is a latecomer, but its coal consumption has more than doubled in the last 10 years—it consumes more coal than the Czech Republic, Spain or the United Kingdom. And demand for energy in these countries keeps growing—energy use per capita is low, and electrification rates and electricity consumption are rising.

This is the challenge in simple terms: while the world beyond Asia might reduce its coal consumption, demand keeps rising in Asia; and this demand growth is not concentrated only in China, or even China and India, but in several other emerging economies that see coal as an answer to their energy needs. The solution to this problem, however, is harder to see. The most common answer, to use more gas, is not quite working, and in several countries in Southeast Asia coal is being used because gas cannot compete or gas is being exported instead. Renewable energy holds great promise, but Southeast Asia needs to do more to scale up its renewable energy potential. China’s Belt and Road Initiative risks entrenching coal further, despite Beijing’s stated desire to maintain the initiative’s green and environmental credentials. Absent a more concerted effort to channel funds that support non-coal energy, the region will keep using more coal, and the world’s success elsewhere might easily be muted by Asia.