Food is power, and China is a hungry player with the drive and capacity to feed a growing world. The U.S.-China relationship is at the forefront of U.S. policymakers’ minds, sparking congressional debates and making headlines on topics from trade to cybersecurity. But what many are not discussing inside or outside the Beltway is China’s ambitious agricultural development goals that will surely impact the global food supply.

Chinese president Xi Jinping’s “Chinese Dream” is a vision for China to become a world-class innovator by 2049. The political will and ability to confront future food security challenges are demonstrated by the country’s position as the largest public agricultural research and development (R&D) system in the world, with 33 percent of Chinese citizens working in the agriculture sector, more than the entire U.S. population. Today, China supplies 20 percent of the world’s food on only 13 percent of the country’s arable land.

Food is more than a basic life need. Food is a cause and consequence of conflict, migration, and political instability, and therefore the necessity to increase food security should be a strategic priority among global leaders. A crucial yet missing aspect in U.S.-China policy discussions is the influence food insecurity has on economies, livelihoods, and U.S. national security. China is on a trajectory that rivals the United States in food production because of its booming agricultural R&D investments, pipeline of science and engineering workforce, and interest and influence in Africa. The next 30 years will see the global population approach an anticipated 10 billion people. Agricultural production must increase by 25 to 70 percent to feed this growth. China’s actions are forward-thinking, and the result may be China outpacing the United States as a global agricultural powerhouse.

A crucial yet missing aspect in U.S.-China policy discussions is the influence food insecurity has on economies, livelihoods, and U.S. national security.

The United States is a pioneer of science and technology because of its entrepreneurial spirit and investments. Yet China is positioning itself to close the innovation gap with increased public and private agricultural R&D spending. Throughout the last decade, public and private agricultural R&D spending increased in China and decreased in the United States. As a result, China has filed the most plant variety applications worldwide in 2017, seeing a 52.8 percent growth; by contrast, the United States reported a 2.9 percent decline. In just three years (2013–2016), total venture capital in China rose from approximately $3 billion to $34 billion, the fastest increase of any economy. For agrifood startups alone, China’s investments increased by 222 percent in 2018 from the previous year. 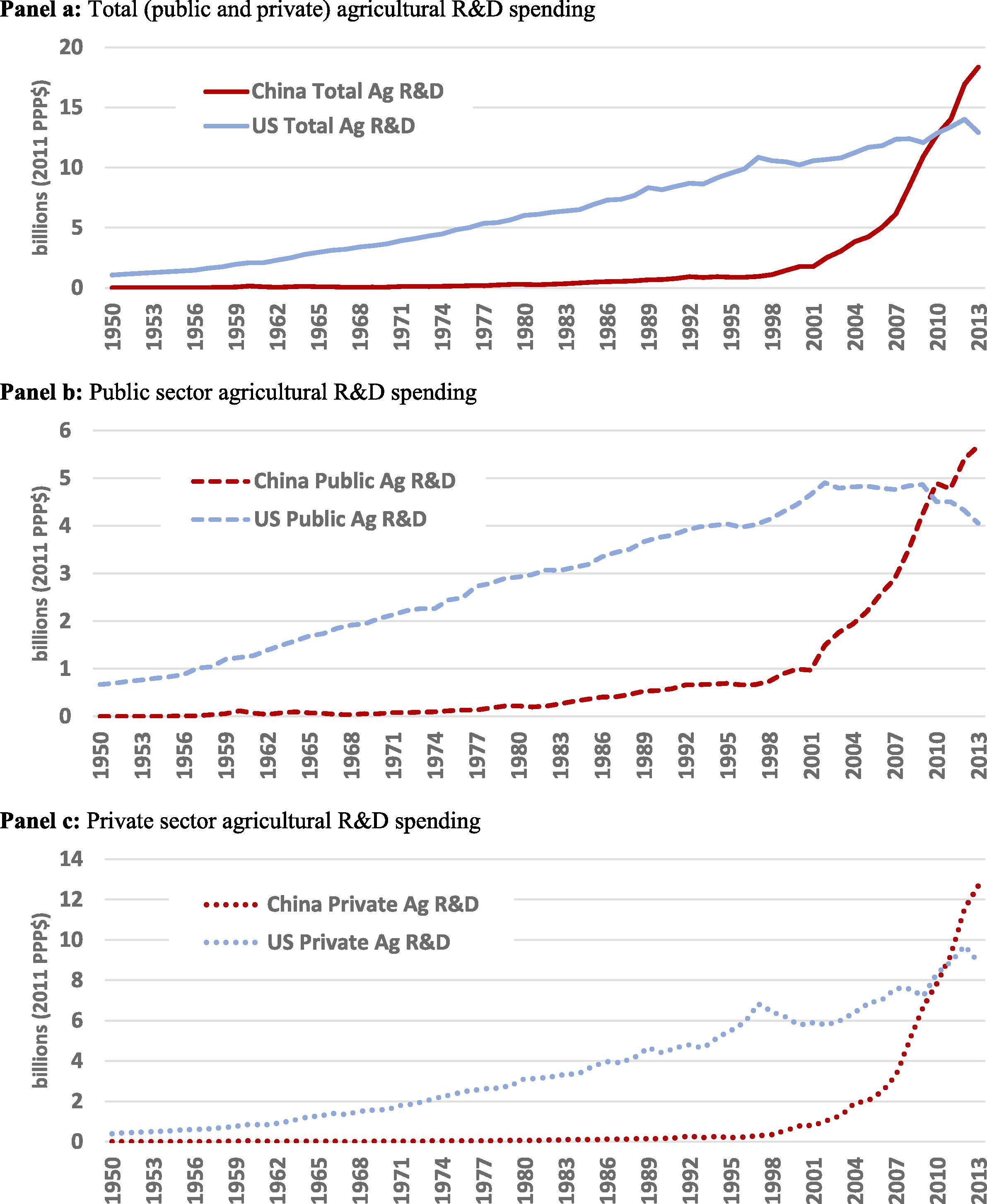 Seed modernization is of special interest to China because quality seeds are the foundation for nutritious crops that are resistant to both disease and climate shocks. China’s 13th Five-Year Plan for Agricultural Science and Technology Development (2016–2020) aims to achieve 97 percent self-sufficiency of main crops and a 50 percent increase of grain yield growth from new seed varieties. The plan, which presented three stages of long-term development, has a goal of being the leader of world agricultural science and technology innovation by 2050 and targets four areas: development of agricultural science technology; extension of technology; human resource development; and institutional innovation.

Agricultural technology is at the core of China’s agricultural R&D, particularly through the establishment of 246 National Agricultural Science and Technology parks that will demonstrate new technologies and facilitate agricultural collaboration. Additionally, agricultural biotechnology—including genetically modified organisms (GMOs)—is an opportunity to strengthen China’s agricultural sector. China has invested heavily in GMO seed development, committing $3.7 billion, which includes 585 biotech breeding projects. In 2017, the state-owned ChemChina acquired Syngenta, the largest producer of agricultural chemicals and third largest producer of seeds. The acquisition was part of a larger food security strategy to be self-sufficient in food production and aids China in diminishing reliance on agricultural imports.

Building a Science and Engineering Workforce

New science and engineering young professionals will be instrumental in the coming decades to reach China’s agricultural development goals and to strengthen the outcomes of its growing agricultural R&D. Scientific publication tracking may be a boring topic to policymakers but should be recognized as an indicator of future impact and competitive innovation—and the publications reported only represent research authorized for the public domain. The emphasis on CRISPR is critical because of the technology’s potential to increase crop yields, nutritional value, and climate change resiliency. Many agricultural technology experts are betting big that CRISPR will be the answer to transform and secure the global food supply.

Growing Interest and Influence in Africa

Adding to fast-tracking agricultural R&D and producing a science-based workforce, China continues to cultivate its presence in Africa. Since the 1960s, China has steadily expanded its relationship with Africa, and unlike other grant-based aid from donors, aid often is combined with investment and trade. China’s remarkable growth model that utilizes market reforms, trade, and foreign direct investment serves as an attractive proof of concept for low-income countries in Africa struggling to improve their economies. Although this “South-South” collaboration fosters mutual benefits, skeptics worry about the influence of China spreading throughout Africa.

Former U.S. National Security Advisor and Ambassador John Bolton described China’s presence in Africa as a U.S. strategic challenge in his announcement of the Trump administration’s Prosper Africa initiative. Although China’s reported land acquisitions in Africa are debatable and overestimated, there is little dispute that China’s other activities in Africa may lead to unstable levels of debt, resulting in potential dominance.

China has focused on four sectors in Africa: agriculture, education, infrastructure, and information technology. China’s African presence gathered speed in 2013 when the Belt and Road Initiative was launched. This infrastructure development project has the goal of connecting China with more than 130 nations through roads, railways, and marine links to increase trade—with 40 African countries already having signed cooperative agreements.

While Africa’s food supply has made significant improvements, much more needs to be accomplished. Africa holds 60 percent of the world’s uncultivated arable land and is comprised of five of the nine countries that will experience half of the world’s population growth by 2050. In 2018, China announced an additional $60 billion for China-Africa initiatives, and agriculture is included as a priority. African countries are proactively seeking opportunities to collaborate with China in agricultural technology. China has established 23 Agricultural Technology Demonstration Centers in African countries, utilizing a technocratic design. The centers have two roles: to transfer Chinese technologies to Africa and to promote Chinese agribusiness.

We live in a world where the food supply should not be controlled by national boundaries. However, food has become a geopolitical tool because of its power. The controversial question remains: what are the present and future intentions of China’s aggressive focus on agricultural development? Without knowing China’s intentions, the prioritization on agricultural development may be perceived as a threat or opportunity for the United States. Whether through science and engineering education or investment in Africa, China is fueling agricultural R&D and becoming the leader in food production —and being the leader inherently creates a competitive edge and control.

Even though competition may inspire rapid innovation, access to nutritious and safe food should be a human right and not a weapon. To achieve equity in the food supply, countries must align and advance agricultural pre-competitive research, transparency, dialogue, trade, and knowledge sharing. One way to collaborate internationally is through supporting multilateral organizations such as the United Nations Food and Agricultural Organization (FAO) and CGIAR. When compared to public agricultural R&D spending for the United States and China, parity was not found in contributions to these multilateral organizations. The United States provided $290 million through assessed and voluntary contributions in 2018 to the FAO, while China’s voluntary support has amounted to just $30 million since 2014. For CGIAR funding since 2011, the United States leads at 24 percent, while China contributed just 0.6 percent.

Whether through science and engineering education or investment in Africa, China is fueling agricultural R&D and becoming the leader in food production—and being the leader inherently creates a competitive edge and control.

The majority of global food security research focuses on low- and middle-income countries. The scientific literature on China and food security is limited, outdated, conflicting, and siloed by disciplines such as trade and food safety, with the primary funding source being the Chinese government. More research is needed. Elevated U.S. and multilateral agricultural R&D funding is vital in ensuring an efficient and nutritious food supply for all. U.S. policy must raise awareness on the critical role food security plays in building peace at home and abroad.

Amy R. Beaudreault, PhD, is a research fellow with the Global Food Security Project and the Global Health Policy Center at the Center for Strategic and International Studies in Washington, D.C.