Senator John McCain (R-AZ) has focused Washington’s attention on management headquarters and command relationships through a series of hearings that the Senate Armed Services Committee (SASC) has held in recent months. The senator has vowed to make major changes, so the national security community is paying close attention. These prospective changes are sometimes referred to as “Goldwater-Nichols 2.0,” envisioned as a follow-on to the original, and highly influential, Goldwater-Nichols legislation of 1986. That legislation made major changes, such as designating the chairman of the Joint Chiefs of Staff to be the principal military adviser to the president, making joint service mandatory for general/flag officers, and strengthening the combatant commanders.

More than 30 top experts in the national security community testified at these SASC hearings. Their testimony covers a lot of ground. In an effort to identify common themes, CSIS analyzed the testimonies (and some related work) and categorized the recommendations into nine areas. CSIS is publishing the resulting spreadsheet to help the dialogue within the national security community. (See the last paragraph for a technical description of the spreadsheet.) This analysis is part of a broader CSIS effort on defense reform.

The testimonies overall. The most striking insight arising from the hearings is the lack of a common problem statement as there was before the original Goldwater-Nichols legislation. In the 1980s, there was a clear consensus that joint operations of the armed forces needed to be improved. Interservice coordination failures at Desert One (the failed 1980 raid in Iran), the bombing of the Marine barracks in Lebanon (1983), and the invasion of Granada (1983) convinced many that changes were needed. Today, although the experts identified a variety of shortfalls and weaknesses in the defense enterprise, no such common theme emerges.

The testimonies by category. CSIS divided the proposals into nine categories, which are analyzed in detail below.

A related recommendation would put the chairman into the chain of command. Although military advice often comes through the chairman, the operational chain of command actually runs from the regional combatant commanders to the secretary and on to the president, specifically excluding the chairman.

An opposite recommendation would give service chiefs more authority for military operations and operational planning. Currently, service chiefs have responsibilities for organizing, training, and equipping forces but none for their operations. That is exclusively the domain of the combatant commanders as a result of the original Goldwater-Nichols reforms.

Another group of recommendations focused on the tension in COCOM missions between war-fighting and peacetime engagement. Although evolving out of war-fighting headquarters, regional COCOMs have taken to creating subordinate joint task forces to conduct military operations. One recommendation was to create such task forces where they do not now exist, for example in the Pacific. An opposing recommendation would refocus COCOMs on war fighting, such as by restructuring them as joint task forces, and leave peacetime engagement to others, such as the Department of State.

A final group of recommendations grew out of concerns that the COCOMs have become too large. These recommendations proposed eliminating service component headquarters and withdrawing COCOMs from department-wide processes like the Planning, Programming, Budgeting and Execution System (PPBES) and acquisition, which would reverse some of the original intent in Goldwater-Nichols. 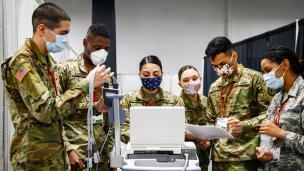 What Did the U.S. Military Learn in the First Year of the Pandemic?
By Mark F. Cancian, Adam Saxton
March 23, 2021
Report 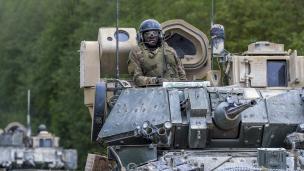 What’s In A Name? Billions In Cuts Depend On Defining ‘Legacy’
Breaking Defense | Mark Cancian, Adam Saxton
March 10, 2021
View all content by this expert