How Can Europe Get Carbon Border Adjustment Right?

The European Green Deal is many things, but the one proposal that most animates outsiders, especially in the United States, is the idea of implementing a carbon border adjustment mechanism, which is basically a tax on imported goods based on their carbon content. On its surface, the proposition is reasonable: if Europe decarbonizes faster than other countries, it should not impose undue costs on domestic producers that exporters to Europe do not bear. The carbon border adjustment mechanism avoids that problem by taking into account the carbon intensity of goods sold into the European Union. But the proposal can create as many problems as it solves—depending on how it is implemented.

The Why and How of Carbon Border Adjustments

The mechanism is a response to “carbon leakage.” A carbon price imposes costs, and if foreign suppliers do not bear these costs, they will gain an advantage. Over time, production will shift to jurisdictions that do not impose this tax, and the country that imposed the measure in the first place will have punished its industry while doing little to limit (global) emissions. The solution to this problem, so far, has been to exempt industry from having to pay these costs by allocating emission rights to them for free. Now Europe wants to impose a cost on imported goods to offset whatever advantage they might have.

In practice, there is mixed evidence of carbon leakage. Several Western countries have gone through a form of deindustrialization, but it is hard to say whether this has been due to energy costs or other factors. In Europe, moreover, heavy industry has received allowances to emit for free, shielding it from carbon costs. How can carbon leakage be measured if heavy industry is not exposed to its full effects? We also know that energy is a significant cost driver for only a few industries; like earlier concerns about environmental dumping, which never truly materialized, this might be a threat that exists mostly in theory, not practice.

The mechanics of implementing a carbon border adjustment are complex as well—so complex in fact that one must wonder if this could happen at all. There are, at the core, four questions. First, what industries to cover, on what basis, and how far upstream should the system go? Second, what is the best way to measure emissions and verify the numbers? Third, how should the carbon border adjustment relate to other carbon costs—say the European Emissions Trading Scheme that already exists, or whatever carbon price a foreign producer might have paid already. And fourth, under what mechanism would such measure be implemented, can the system be made compatible with existing obligations under the World Trade Organization and existing EU powers, or will implementation depend on new rules?

This is a policy, therefore, that tries to solve a problem that might not be a problem, and it is cumbersome and complicated to implement—so much so that it is unclear if such a measure could ever work in practice. Is it possible that trying to implement this measure leads to cross-border conflict and serves as a distraction from other, more collaborative policy measures? It all depends on how the measure is designed and implemented.

What Are the Benefits?

The most important reason to impose a carbon border adjustment mechanism is to secure the buy-in of local industry for deeper decarbonization policies. It is hard for any country to agree on aggressive targets, and it is harder to do so when powerful constituencies—people with money and connections and companies that employ a lot of people—are fighting against these measures. Regardless of how much carbon leakage exists in practice, powerful people see it as a problem. Offering a solution to that problem might help garner support or, at least, lessen opposition. Read that way, a carbon border adjustment mechanism is helpful because it enables a country to be more ambitious—regardless of what other countries do and how they respond. And if the country in question is big enough, efforts by industry to decarbonize might help develop new practices and technologies that might be useful to other countries as well.

The second benefit is to develop some infrastructure that might be needed down the line. One can imagine a future where the carbon content of a good really matters—where consumers want to know whether more or less carbon was emitted in the production of one good over another, or whether governments taxed carbon emissions even if those emissions originated in a foreign country. Doing these things will depend on a complex ecosystem: rules on what to measure and how; processes for real-time and independent verification; and an apparatus to ensure compliance, avoid double counting, and check whether the rules are achieving their intended purpose. This infrastructure exists, to an extent, within different countries, but an effort to harmonize standards across countries would be essential. The carbon border adjustment mechanism is a vehicle to accelerate that conversation—even if the end goal is years away and has to overcome serious practical obstacles along the way.

The third benefit, in theory at least, is that this tax will induce companies to adopt lower-carbon technologies in order to access or be more competitive in a market where the carbon intensity of a good matters for the bottom line. Whether this happens in practice, however, depends on two factors: how many countries sign up, and how ambitious the measure ends up being. 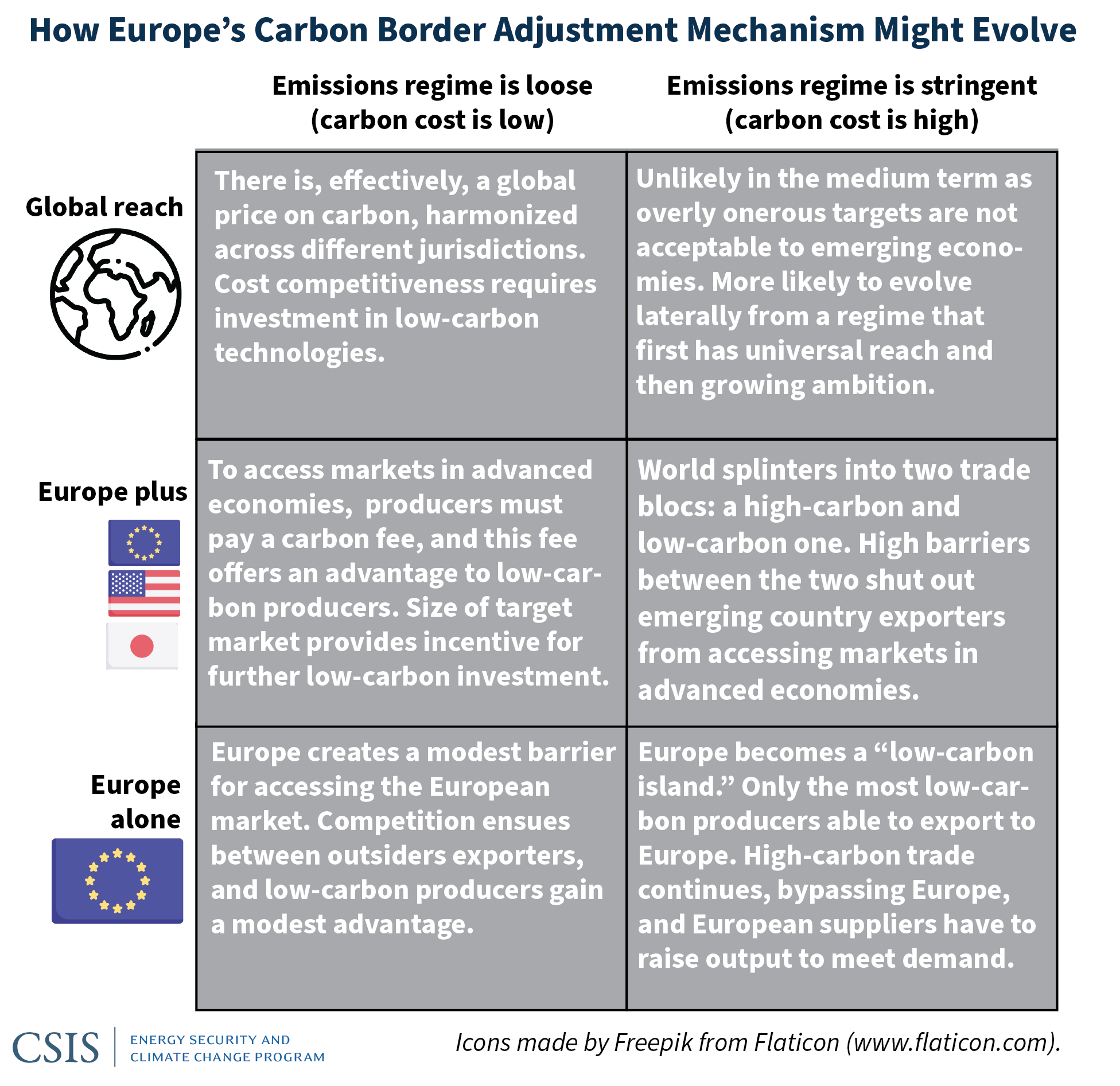 The Price Must Be Right

If Europe implements a carbon border adjustment mechanism alone, it becomes a low-carbon island. Exporters who are competitive in that environment will keep exporting to Europe, and others will sell their goods elsewhere. If more countries join—the United States and Japan, for example—the island now encompasses a significant share of the world economy, and suddenly, companies have greater incentive to invest in low-carbon technologies to be able to sell into that big market. Eventually, as more countries join, the world effectively adopts a version of a global price on carbon.

How this evolves, however, depends on the level of ambition that countries in the “club” have. If the ambition is high, the cost on carbon is likely to be high as well, and it is entirely possible to see a world where a carbon border adjustment becomes a major barrier that basically penalizes poorer countries that generate more of their energy from fossil fuels. If the ambition is very low, by contrast, the measure ends up being a modest cost passed on to consumers, with little impetus to accelerate the development of low-carbon alternatives.

There exists, in other words, a sweet spot. Set the carbon price too high and you splinter the world trading system—one world becomes low carbon, another becomes high carbon, with limited trade between them. Set the price too low and it becomes a modest cost that is absorbed into final prices without much decarbonization impact. The price, therefore, must be just right: it should allow the most technologically advanced firms in emerging economies to be competitive and incentivize the rest to invest in lower-carbon approaches. Otherwise, whatever gains are made inside the low-carbon bloc will be offset by what happens outside of it.