How Open and Public Cryptocurrencies Can Help Venezuelans

Since the Maduro regime launched the petro, its attempt at a national cryptocurrency, Venezuela’s open and public cryptocurrency ecosystem has been underestimated. For individuals living in a 2,600 percent inflation economy with authoritarian monetary policies like in Venezuela, cryptocurrencies built on public blockchains offer a variety of solutions. These benefits include preserving the value of Venezuelans’ money while protecting it from their government and offering solutions to send humanitarian aid more efficiently and securely.

Q1: How do these currencies work? How do they differ from private cryptocurrency and traditional currency?

A1: Open and public cryptocurrencies are digital currencies that use cryptographic algorithms to record and secure information that is stored on a distributed ledger, a network of computers that is known as a blockchain. Open and public cryptocurrencies, such as Bitcoin, are not issued, controlled, or maintained by any central authority. In countries such as Venezuela, this is a vital feature which shields the digital currency from manipulation, government interference, duplication, or double spending.

Not all cryptocurrencies are created equal. Cryptocurrencies can be built on public, private, or permissioned blockchains. The first modern cryptocurrency, Bitcoin is built on a public blockchain, which means that the computer code runs autonomously on a decentralized network of computers. There is no intermediary or company running it, making it resistant to censorship, and it has benefits such as cost reduction and transparency. Bitcoin, for example, has been operating 24/7, without a second of downtime, since it was launched in 2009.

Cryptocurrencies can also be built on private or permissioned chains. This is a desirable solution for finance institutions and central banks who want to have control over who participates and control over transactions. Private chains allow these institutions to do things like overriding, editing, and deleting transactions, similar to how traditional financial systems currently operate. For example, the Chinese Central Bank (PBOC) and the Bank of Japan (BOJ) have been working to issue their own central bank digital currency (CBDC). Major private banks are also working on using private blockchains for intra-bank transfers or payments, such as the JPM Coin by J.P. Morgan. However, private and permissioned cryptocurrencies can suffer from having centralized points of failure, which are vulnerable to hacking and manipulation.

Q2: What is the status of the petro and why did the Maduro regime launch it?

A2: The petro was an attempt by the Maduro regime to circumvent U.S. financial sanctions. In early 2018, when the Trump administration was pressuring the Venezuelan government through sanctions, Maduro's advisers, with some help from Russia, launched petro with a huge propaganda campaign and not much actual proof that petro existed as a usable technology. Back then, Venezuela became the first nation state to ever launch a so-called cryptocurrency. However, the petro is not an open and public cryptocurrency; it is a financial instrument built upon a closed system that claims to be a private blockchain.


The petro is subject to the regime's control, unable to be mined, and is unconstitutionally backed by a basket of natural resources including oil reserves, iron, diamonds, and gold. The petro is not internationally traded, and there is limited public information about the technology behind it or how it is used. Though it may be marketed as an open and public cryptocurrency, it resembles a typical digital asset in the financial system. While the Maduro regime has been using petro to pay pensioners and retirees and has even made gas stations receive payments in petro, there is little evidence of transactions being made in petro.

Q3: Why are Venezuelans using open and public cryptocurrency and why does it matter?

A3: There are five main reasons why Venezuelans are adopting decentralized and public cryptocurrencies.

Stability. In addition to a failing economy and hyperinflation, it is difficult to make day-to-day transactions in Venezuela. Cash is scarce and traditional payment networks are so overloaded that it regularly takes hours, and good luck, to pay the equivalent of $4 to a taxi driver, for example. Although volatility remains high, holding cryptocurrencies like Bitcoin remains more valuable in the longer term than holding bolivars or even U.S. dollars, which are difficult to transact due to domestic regulations and international sanctions. So, it shouldn't come as a surprise that Venezuelans are using alternatives to preserve the value of their savings or make payments. 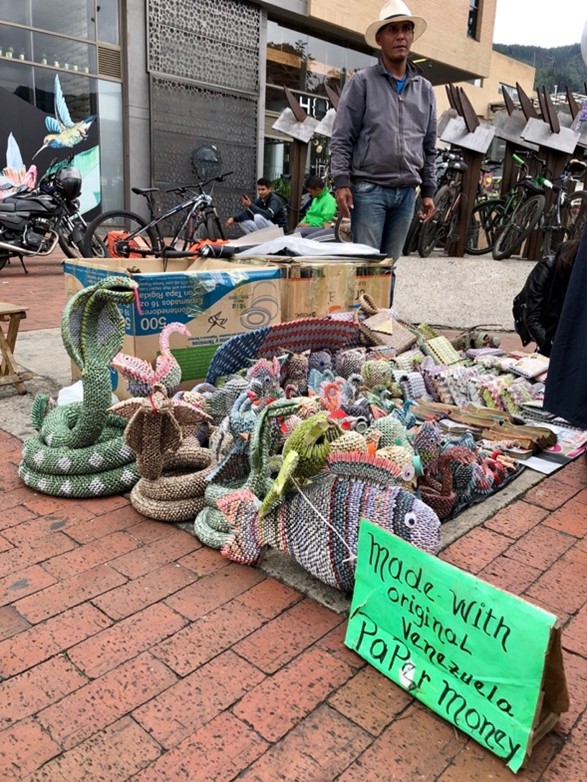 
Remittances. As more than 5 million people have fled Venezuela in recent years, remittances have increasingly become a lifeline, reaching at least 35 percent of Venezuela’s households. About 3.9 billion dollars could have entered the country via remittances in 2019 according to Ecoanalitica. But as oil revenues dry up and the country is cut off from the financial system, the cash-strapped regime has taken steps to regulate hard currency remittances from a growing Venezuelan diaspora. This is where decentralized, neutral, and censorship-resistant cryptocurrencies could be used to mitigate the regime's controls while helping Venezuelans continue to support their family and friends back home.

Humanitarian aid. As the Maduro regime continues to reject international aid and Venezuela is increasingly cut off from the global financial system, sending much-needed humanitarian aid to Venezuelans has become a challenge. However, some nongovernmental organizations (NGOs) are already exploring the use of cryptocurrency donations to buy and distribute food on the ground. One example is Bitcoin Venezuela, a nonprofit organization that feeds about 2,000 people on a daily basis through Bitcoin donations. Cryptocurrency not only offers a direct way to donate to people in need, but donations also incur almost no cost from intermediaries. This is key in the humanitarian space as there are scarce resources. Another example is Acción Solidaria or Action for Solidarity, a well-known NGO that combats HIV and other illnesses in the country. They partnered with The Giving Block to create their own digital wallet to receive cryptocurrency donations.

Security. Venezuela is one of the most insecure countries in Latin America. The average Venezuelan suffers from petty theft, sometimes even at the hands of the national guard or police. Refugees and migrants are especially vulnerable to having their cash stolen while they travel throughout the country and the region. With cryptocurrency, Venezuelans can safely protect their money as it’s stored in a digital wallet, inaccessible to anyone but to the holder or owner.

Financial inclusion and international sanctions. About 90 percent of remittance transactions are estimated to go through international banking services such as Zelle. However, most Venezuelans don’t have enough U.S. dollars to open a U.S. bank account (and therefore, a Zelle account). In addition, international bank accounts owned by Venezuelan citizens have been closed down due to sanctions and overcompliance issues. On the other hand, open and public cryptocurrencies offer a direct, cost-efficient, more inclusive, and decentralized payment mechanism for Venezuelans.

While cryptocurrencies like Bitcoin can offer benefits to countries like Venezuela, they are by no means a silver bullet to solve all humanitarian challenges. Limited access to the internet or smartphones, lack of education and awareness on how to use the technology, and uncertainty on international regulations are some of the challenges to overcome. That said, cryptocurrency use cases in closed societies such as Venezuela should continue to be explored.

Moises Rendon is a senior associate with the Future of Venezuela Initiative at the Center for Strategic and International Studies in Washington, D.C.

Lessons for Negotiations in Venezuela: A Roadmap
By Moises Rendon
May 24, 2021
In the News

What Does the Responsibility to Protect (R2P) Mean for Venezuela?
By Moises Rendon
November 17, 2020
On Demand Event

Online Event: Analyzing the Role of the European Union in Venezuela
November 9, 2020
View all content by this expert