If the Fighting Ever Stops: Stabilization, Recovery, and Development in Syria

There is a natural tendency in war to focus on the fighting and the politics of a ceasefire or peace settlement, and to look at the challenges in creating some form of short-term stabilization. All are critical issues in ending the fighting in Syria. It is a country that is now the scene of a series of four interacting wars and power struggles:

Each of these wars and power struggles has had a steadily growing humanitarian impact on Syria's entire population—although that impact has been far worse in the key areas of combat. It has done immense damage to Syria's economy and social infrastructure, and has reversed key aspects of its economic development.

It is also far from clear that any of the four struggles listed earlier can easily be halted in ways that lead to any lasting form of stability, recovery and development. Simply defeating ISIS, for example, will not provide any clear basis for stability, and neither will separating the Assad controlled areas from Arab rebel areas, or carving out some form of Kurdish zone. Ceasefires and de-escalation zones may reduce the level of human suffering, but will scarcely end it or allow progress towards development.

Their implications for stability operations and U.S. strategy have already been addressed in a previous Burke Chair paper entitled "Stability Operations in Syria: The Need for a Revolution in Civil-Military Affairs," that appeared in the U.S Army Military Review in March 2017. They have, however, become steadily more urgent as the fighting has continued, as Russia pushes for a solution based on de-escalation zones, and as the United States moves towards trying to drive ISIS out of its "capital" in Raqqa, while coping with deeply divided Kurdish, Arab, and Turkish allies. The need to understand the full range of challenges in creating some strategy for stability, recovery and development in Syria needs to be a key part of any such efforts at conflict resolution.

A new analysis by the CSIS Burke Chair in Strategy focuses on providing an in-depth comparison of UN, IMF, and World Bank reporting on the economic and social causes of Syria's political upheavals and fighting, the humanitarian cost of the fighting to date, and the key implications of the fighting for development and long-term stability. This new report is available on the CSIS website at https://csis-website-prod.s3.amazonaws.com/s3fs-public/publication/170516_Syria_If_Fighting_Ever_Stops.pdf?2aCOiiABepQMrtUie2e5XOy_iqCe8XTn.

The UN, IMF, and World Bank comparisons show that Syria approached the status of a "failed state" in the years before the political upheavals in 2011 and civil war. They also show that Syria has since become a humanitarian disaster. More broadly, they show the extent to which the fighting has created massive problems for recovery and development that can only be addressed if Syria can reach some form of internal political stability, and gain the kind of effective governance that can consistently pursue a mix of policies that has public support.

At the same time, the reports summarized in this analysis must be kept in perspective. First, all of the sources that are quoted and compared make it clear that reliable data are lacking in many areas. Second, the fighting still goes on and the problems grow with time. Third, they show that many currently proposed forms of efforts to end the fighting will not create conditions that offer credible future stability, recovery, and development.

As several of the reports warn, this comparative analysis also draws on UN, IMF, and World Bank reporting that largely treat Syria as a unified state, and that do not attempt to address the sharply conflicting interests of different elements of the Syrian people, its power brokers and warlords, and outside states. As result, this study only tells part of the story. The challenge of producing any form of viable unity or separation that meets sharply competing internal needs and interests is almost certain to sharply compound the all too real nation-wide problems discussed in this report.

Moreover, Syria's problems cannot be separated from those of neighboring states that are impacted by its conflict and that impact heavily on Syria: Iraq, Jordan, and Lebanon. Syria is also only one of the conflict states that competes for international and attention, and where the competition between outside states is a further major source of warfare, instability, and human suffering.

At the same time, the reporting on the mistakes that led to Syria's crisis in 2011 and the civil war that followed, on the current levels of suffering, and on the steps that can lead to future recovery, development and stability, does provide some critical common lessons.

Military action alone cannot bring an end to the forces that shape the instability in any such country, and that no short-term form of ceasefire or conflict resolution in likely to avoid a return to new forms of fighting, it is equally clear that Syria and the other conflict countries cannot succeed without both creating new and more effective forms of governance and without substantial outside aid.

Some conclusions for shaping a successful strategy to meet the challenges outlined in this study are all too clear. 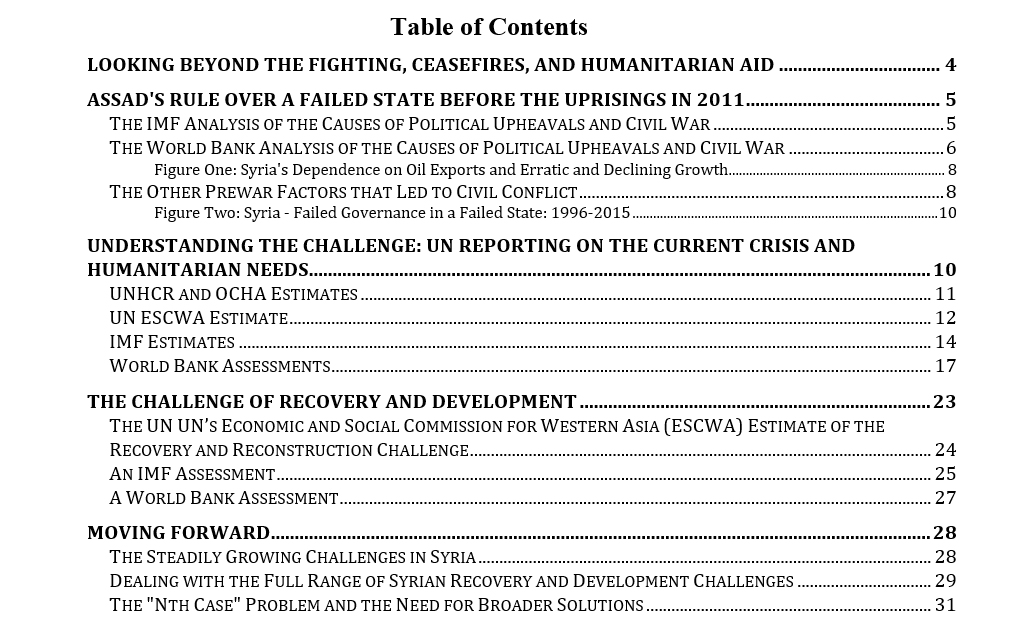