Juan Guaidó, defying a travel ban, slipped secretly into Colombia to meet with the United States and regional allies on the sideline of a regional counterterrorism meeting earlier this week. He is now in Davos talking with world leaders about Venezuela’s deepening crisis and the role of the international community in helping Venezuela. At the same time, Nicolás Maduro’s foreign minister visited his Iranian counterpart to strengthen bilateral relations between the two countries. The following is an analytical assessment on Guaidó's first year in office, the options he has on the table, and some recommendations for his 2020 agenda, with a special emphasis on international aid and assistance to Venezuela and Venezuelans.

Q1: What is the balance of Guaidó’s administration so far?

A1: The international recognition of Guaidó as interim president of Venezuela in January of 2019 was both a legitimate and strategic move. First, it supported the only democratically elected institution left in the country, the National Assembly. Recognition of Guaidó also helped unite the political opposition under a single leadership structure. It limited Maduro’s ability to represent Venezuela in multilateral institutions, such as the Inter-American Development Bank (IADB) and the Organization of American States (OAS), and enabled Guaidó to name ambassadors and representatives. Among other effects, the international community’s recognition gave the Guaidó administration access to Venezuela’s assets abroad, preventing Maduro’s government, one of the most corrupt in the world, from controlling them.

Nevertheless, Guaidó saw other opportunities to help Venezuelans slip away. Seven million Venezuelans (about 20 percent of Venezuela’s population) are in need of humanitarian assistance, and Maduro continues to reject international aid. Several world leaders, along with Guaidó, unsuccessfully tried to send humanitarian aid through the Colombian-Venezuelan border in February 2019. However, that was the first and only attempt at bringing aid into Venezuela on a massive scale. Prioritizing and planning a successful strategy to bring aid inside Venezuela should be one of Guaidó’s priorities. 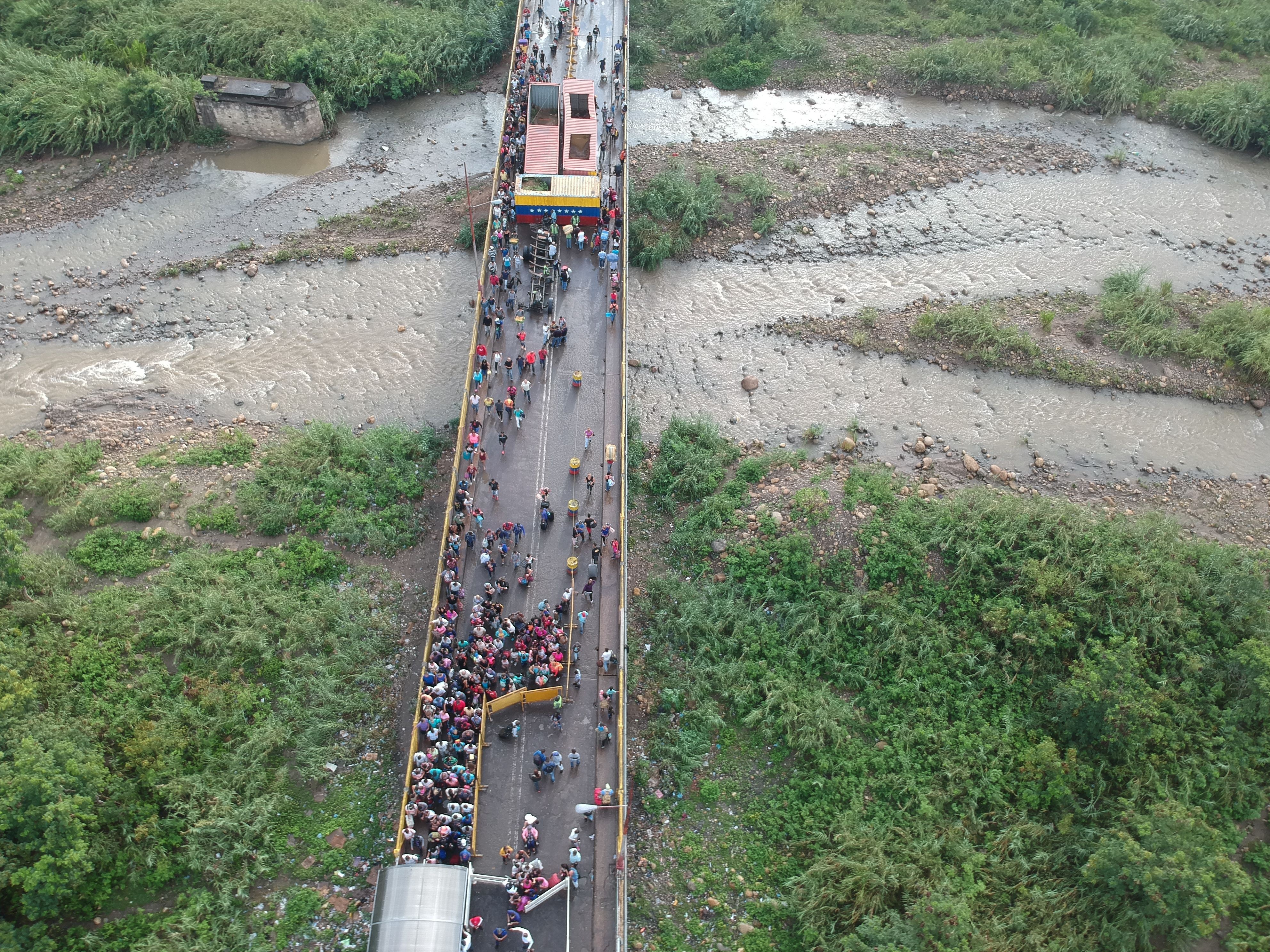 Neighboring Colombia has borne the brunt of the Venezuelan exodus with the daily influx between 35,000 to 50,000 people in 2019. About two million are currently in Colombia. Many of these individuals cross the border in a desperate search for food and medicine and then return to Venezuela. Photo Credit: Moises Rendon/CSIS

Guaidó lost another opportunity when only some members of the Venezuelan military declared their support for his government during an uprising on April 30. Maduro’s defense minister and other generals rejected the move soon after. This was not the first time military officials have attempted to remove Maduro from office, but it was the first time that their defection coincided with support from the international community.

With ramped-up sanctions, political stalemate, and concerns for unity among Maduro’s inner circle, the opposition and Maduro’s government both saw reasons to participate in Norway-sponsored talks in late spring of 2019. But opening talks with Maduro, with no evidence of his willingness to actually negotiate, created more confusion than clarity within and outside of Venezuela. For example, surveys show that in January 2019, 84.6 percent of people said they were willing to take to the streets to defend and support Guaidó. On December 2019, 84.8 percent of those surveyed said they would not take to the streets anymore.

Q2: What options are on the table for Guaidó?

A2: Despite external support from Russia, Cuba, and Iran, Maduro is more isolated on the world stage than ever before. However, stiff sanctions and diplomatic isolation have not yet convinced Maduro to negotiate his exit, and his regime has proven to be resilient and adaptable in the face of international restrictions. In the meantime, Venezuelans continue to flee at breakneck speed; 5.3 million have fled so far, and there is no end in sight.

Guaidó’s current travels give him the opportunity to expose the dimensions of Venezuela’s economic and humanitarian collapse. His meetings with world leaders at Davos could help the international community envision what the rebuilding of Venezuela would look like. In addition, Guaidó will test the international appetite to oust Maduro mainly through sanctions. But as economic and diplomatic isolation haven’t yet convinced Maduro to leave power, the question of what can be done remains.

Colombian president Ivan Duque, after meeting with Guaidó this week, continues to call for a “credible transition” and “free and fair elections” as the solutions to the humanitarian crisis. Yet it is difficult to imagine free and fair elections, especially if Maduro and his regime’s electoral council were to run them. In the meantime, the United States and a few other countries have imposed individual and sectoral sanctions, debilitating Maduro’s bandwidth to run the country. But with external support by Russian oil company Rosneft, and by increasing illicit activities such as illegal gold mining and narcotrafficking, Maduro has been able to survive such international sanctions.

On the other hand, Luis Almagro, secretary general of the OAS, encouraged the use of international agreements that aim to protect both the lives of Venezuelans and regional security. The Responsibility to Protect (R2P) commitment and the Inter-American Treaty of Reciprocal Assistance, known as the Rio Treaty or TIAR for its initials in Spanish, are two instruments at the disposal of Guaidó and the international community. For example, given the rapidly escalating political and humanitarian crisis in Venezuela, and the repression and physical harm that the Venezuelan people have been subjected to in recent years, the relevance of R2P has become a crucial part of the discussion surrounding the international community’s response to the crisis. Also, member countries of the Rio Treaty agreed in September 2019 to sanction and extradite Venezuelan government officials who participate in drug trafficking, terrorist activities, organized crime, and human rights violations.

A3: Recent events have signaled what comes next. On one hand, the government's security forces blocked opposition lawmakers from entering the National Assembly ahead of a vote for a new president of the Chamber of Deputies. In addition, Maduro continues to pursue policies to avoid international sanctions, such as trying to revive the Petro, that will only exacerbate the country’s economic crisis. Maduro’s priorities can be summarized in three pillars: exhausting the Venezuelan people and the international community, creating a separate opposition faction that opposes Guaidó, and maintaining his grip on power.

The Maduro regime has partaken in criminal activities that exacerbate the severity of the crisis and the region’s instability, including illegal mining, money laundering, corruption, and narcotrafficking, among others. Selling gold to international black markets not only helps prop up the Maduro regime but also underscores how deep corruption runs in Venezuela’s institutions.

Given the current drivers at play, the status quo is a likely scenario for 2020. But there will be a key event that will once again test Maduro’s resiliency and Guaidó’s leadership: parliamentary elections. With no exact date set yet, the Constitution of Venezuela states there should be parliamentary elections this year. Like previous elections, this will create a dilemma for the Venezuelan people, the opposition, and the international community: whether to participate in an election or not.

The path to restoring Venezuela's democracy and stability will undoubtedly be long and arduous. But with no clear electoral way out, the role of the international community remains essential for aid and assistance to Venezuela.

Moises Rendon is director of the Future of Venezuela Initiative and fellow with the Americas Program at the Center for Strategic and International Studies (CSIS) in Washington, D.C.