A year of Taliban rule over Afghanistan has shown all too clearly that there are good reasons to debate the future level of aid to Afghanistan. The Emeritus Chair in Strategy at CSIS has prepared a detailed analysis of these issues, drawing on key sources like the UN, OHC, World Bank, CIA, and SIGAR. It is entitled Setting the Right Conditions for Aid to Afghanistan – and Other Nations As Well. A downloadable copy is attached below, and the report is available on the CSIS web site at https://csis-website-prod.s3.amazonaws.com/s3fs-public/publication/220815_Cordesman_Afghanistan_Aid.pdf?ZEXdvWW118MXbVqi7tVhXyB8V47JZkU8.

The analysis addresses the fact that the Taliban is an extreme ideological movement whose values are clearly opposed to those of both Western democracies and the mainstream of Islam. It has defeated a U.S. and NATO backed government in war, and has already forced the population of Afghanistan to surrender most of the progress made in human rights and the role of women.

The Taliban is still in the initial process of adapting the structure of governance it inherited from the regime it defeated, and has no clear plans or goals for the future development of the country. Its leadership has shown some signs of stability, but it is far from clear that this leadership will continue in power or remain united for any extended period, and how efficient a capable it will be in establishing an effective level of governance.

It is all too possible that the Taliban will use outside aid to serve its own ends or benefit from such aid in winning popular support. While the Taliban has been less corrupt than other movements in Afghanistan in the past, this is no guarantee for the future. The Taliban has confiscated housing and other civil assets and has yet to establish anything approaching a stable rule of law, or evidence of how it will manage – or try to manage – the Afghan government.

Furthermore, the Taliban must try to build an effective structure of governance and development on the extraordinarily weak foundation created by the previous government during 2001-2021. The U.S backed Afghan government was one of the least effective and most corrupt governments in the world, had created an extraordinarily weak system of government and rule of law, had failed to use massive amounts of foreign aid honestly and effectively, and had created massive development problems in every area from per capita income to job creation.

It is tempting to ignore these factors at a time when Afghanistan is clearly in crisis, and there is a steady stream of reporting on the suffering of the Afghan people. The attached analysis warns, however, that many other states have similar needs, and Afghanistan has a long history of misusing aid and creating more humanitarian needs rather than supporting development and reducing these needs over time. Moreover, humanitarian aid has serious limits unless it is tied to funding lasting solutions to the problems that create the need for such aid. It analyzes the failures of the previous government in some depth and warns that major changes are needed in the way the U.S. has planned and managed previous aid efforts.

The analysis shows in detail that future aid to Afghanistan will not build on a foundation of success, but on a foundation of failure by the previous Afghan government – a failure that in part is the failure of past outside aid efforts to help a Western-backed Afghan government create successful development plans, and to enforce a high enough level of conditionality to limit the massive levels of corruption, waste, and misallocation of aid the previous Afghan government carried out over a period of nearly two decades. From an aid perspective, the Afghan government did not collapse in August 202l. It had never succeeded in using outside aid with the needed level of effectiveness, during the period from 2002 onwards and had created an aid-dependent economy and budget structure that already had led to growing problems and failures.

It also shows that any future U.S. aid to Afghanistan must be allocated with great care as to how it will actually be used, and its impact on the future character of the Afghan regime. So this analysis shows there are also many other nations that need U.S. aid and may use more effectively and in ways that do more to serve U.S. strategic interests.

Moreover, it shows that it will be all too easy for the U.S. and other outside donors to focus on humanitarian aid, and on other kinds of aid that have only limited short term impacts and do more to help the Taliban retain power on its own terms, rather than help the Afghan people in lasting ways. This could mean providing aid to a hostile or near hostile regime which is of only marginal strategic interest to the U.S. at a time other friendly nations have major needs for aid and can make better use of such aid in ways that will have a lasting impact. 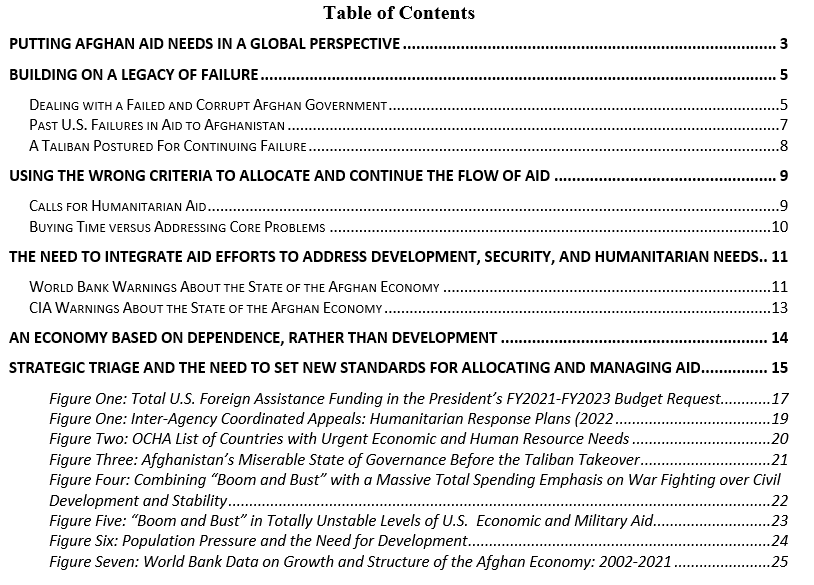