Over the weekend of May 3-5, Israel carried out airstrikes against targets in Syria, specifically against a shipment of missiles believed to be headed towards Lebanon. This is the third set of Israeli strikes that has hit Syrian targets without reports of effective Syrian resistance or Israeli losses since the start of 2013. It also follows on the successful Israeli air strikes that destroyed a nuclear reactor under construction in the Deir ez-Zor region on Syria on September  6, 2007.

Israel’s success does indicate that the purely military risks in enforcing some form of no fly or no move zone are now more limited that when the fighting in Syria began. At the same time, this does not mean that Syria could not put up a defense or that the US could simply rely on a few strikes or threats to either destroy Syria’s air defense or intimidate it into complying with US demands.

The practical problem is that we do not know how many stand-off weapons were used, how far the Israeli Air Force (IAF) aircraft had to penetrate, or the real-world readiness of Syrian air defenses.

We do not know if Syria has seriously tried to halt IAF attacks. Syria has not been able to use these systems effectively against Israel since the early 1980s. Syria may be willing to wait out limited IAF strikes rather than reveal the electronic order of battle and send signals that would help Israel develop improved methods of suppression during a limited attack.

We know most of the Syrian longer-range surface-based air defenses are still largely active and provide overlapping coverage of much of the country. But they also have aging surface-to-air missiles (SAM) that have been only partially upgraded and are vulnerable to jamming and other electronic countermeasures, as well as antiradiation missiles.

There are no reliable estimates of what is left or active. Before the civil war intensified, the IISS and Jane's estimated that they included 25 AD brigades with some150 SAM batteries. These include a mix of aging low altitude defense systems, largely developed in the 1970s or earlier, using S-125 Pechora (SA-3 Goa), 2K12 mobile, short-range Kub (SA-6 Gainful), obsolete medium to high altitude defenses with S-75 Divna (SA-2 Guideline), and 2 AD regiments with 2 battalions each, which each had 2 batteries with S-200 Angara (SA-5 Gammon).

We also know that Syria has sought far more modern Russian systems like the S-300 and S-400 for more than two decades and every attempt has failed—largely because of Syrian financing problems and Russian sensitivity to Israeli views. It is also clear that Syria has had to relocate substantial parts of these forces to avoid rebel forces taking them. Syria had also over-concentrated them around its cities and near Israel before the civil war, leaving vulnerable "corridors" in the north and the west, while IAF aircraft could also fire from Lebanese air space.

The newest of these systems could be effective if their location was unknown but IAF aircraft had standoff weapons that allow them to strike outside the range of such systems and advanced countermeasures that will seriously degrade most of these systems. The Assad regime may also be scared of distributing them because of the risk that they would fall into rebel hands.

The Syrian air force had some 365-385 combat aircraft when the fighting started. It is not clear how many are now active but a rough estimate is probably about 50 percent with very low sustainability against an active air attack, limited pilot training, and low daily sorties generation rates. It had no modern air defense fighters and operational readiness standards have almost certainly degraded. Syrian holdings of air defense fighters included 85 aircraft with aging avionics and which are very vulnerable to both IAF and U.S. fighters, air-to-air missiles, and air combat systems like the AWACs. These include: 50 obsolescent MiG-23MF/ML/UM Flogger, 35 export versions of the MiG-29A/U Fulcrum with limited computer and radar capabilities for look-shoot down and long range BVR combat. According to the IISS, a large number of these systems were not operational before the civil war: 30 MiG-25 Foxbats and 2 MiG-25U Foxbats.

The rest of the Syrian air force was attack-oriented in spite of the fact that it had little chance of surviving Israel's air defenses. Again, the IISS and Jane's estimate it included some 105 obsolete MiG-21MF/bis Fishbed, 15 obsolete MiG-21U MongolA, 50 obsolescent MiG-23BN/UB Floggers, 50 limited-capability Su-22 Fitter D, and 20export versions of the Su-24 Fencer with limited computer and avionics capabilities. It is possible that the Syrian air force has rules of engagement that preclude the use of fighter aircraft for anything other than all-out war given the massive losses they suffered fighting the IAF in 1982.

This makes the Syrian forces vulnerable to U.S. military action to enforce some form of no fly/no move zone, but Syria still has a much larger and more capable mix of forces than Libya possessed. It would take a massive U.S. air and cruise missile attack to suppress it quickly and would be difficult for even two carrier groups to carry out and sustain. As a result, the United States would certainly desire land-bases from allies like Jordan and Turkey and the use of Qatari and/or Saudi bases.

Syria could also choose to ride out a U.S. threat and then constantly push the U.S. by appearing to prepare its forces, locking on radars, etc. These are tactics that would stress any U.S. forces enforcing a zone. Syria also knows all about them from U.S. operations in Iraq and the former Yugoslavia. In short, Syria does not have strong air defenses by U.S. standards but it is still very large. It would take a major U.S. air effort to accomplish quickly and the United States might well take some losses if Syria fought back and would have to have a sustained presence if Syria chose not to fight.

There is also the question of how broad a U.S. no-fly zone would really be. If the United States included civilian protection areas, it would have to be prepared to use airpower to stop pro-Assad ground forces as well. If it was a true “no fly” zone, it would have to deal with Syrian helicopters as well, and they have been key threats. (IISS pre-civil war estimates were 33 Mi-25 Hind D attack helicopters, Mi-17 Hip H and 30 SA342L Gazelle multi-role armed helicopters, and 40 Mi-8 Hip transport helicopters, and some 60 percent are probably still operational).

Moreover, "no fly" would presumably mean no Syrian missiles and rockets and Syria still has a significant inventory of such systems.  In short, even though the events of the past weekend may suggest air power’s efficacy in responding to the civil war, it will be no easy task to expand this into a wider campaign. 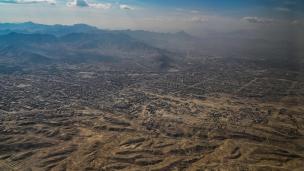