Unraveling the Water Crisis in Venezuela

A conference, including a plenary session and a series of roundtables, was held at the Center for Strategic and Institutional Studies (CSIS) in Washington, D.C. on October 3-4.1 This conference examined the magnitude of the water crisis in Venezuela. Plan País—an initiative of the Venezuelan National Assembly which completed a diagnostic of the water crisis as part of its action plan for reconstruction—along with U.S., Venezuelan, and other international experts,i discussed strategies for reconstruction of the physical water supply system and rebuilding of its management institutions at the national level.

Experts also discussed the roles of public-private partnerships, the United States, other bilateral donors, and international finance in the rebuilding efforts. These discussions resulted in increased awareness of the challenges, lessons, and opportunities for Venezuela and the international community in both the mid- and long-term time frames in mitigating one of the country’s most urgent humanitarian needs. This brief details the conclusions and recommendations discussed at this conference. 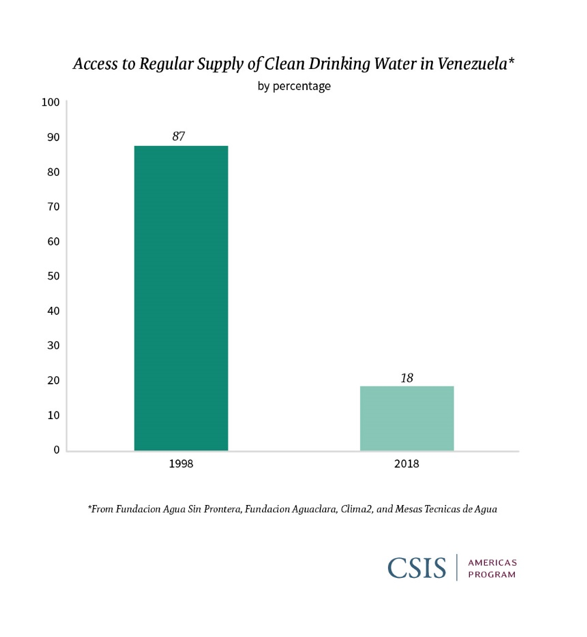 Magnitude of the Water Crisis

Despite ranking as one of the world’s top 15 countries in renewable fresh water resources, nearly 8 out of 10 Venezuelans do not have continuous access to clean drinking water and basic sanitation. For most citizens, the water they sporadically consume is of dubious quality or not drinkable. Clean water in Venezuela has become a luxury, and even with price controls set in place, a bottle of water is about $3, a significant portion of the country’s minimum wage of approximately $8 a month.

Venezuela’s water crisis also impacts wastewater collection, sanitation, control over sewage, and farmer’s access to water for irrigation. Partly as a result, national production in agriculture, including for main crops such as rice, corn, and coffee, has fallen to approximately 60 percent within the last 20 years. This fall in agricultural production is associated with the average nationwide weight loss of 24 pounds in 2017. Those gaps in access, quality, and management of the nation’s water resources are having a devastating long-term effect on the health, education, economy, and dignity of the Venezuelan people. The most vulnerable are children, whose cognitive development is most susceptible to impacts from anemia, chronic malnutrition, and preventable communicable diseases. These appalling conditions are forcing more Venezuelans to flee.

About a million Venezuelans are exposed to contaminated supplies, putting the population at risk of contracting waterborne viruses, especially threatening the lives of children and the most vulnerable. The magnitude of the water crisis as shown in Figure 1, which notes that in 1998, 87 percent of the population was estimated to have a continuous and regular supply of clean drinking water. The percentage dropped precipitously in the years after Maduro took power, falling to 18 percent in 2018. 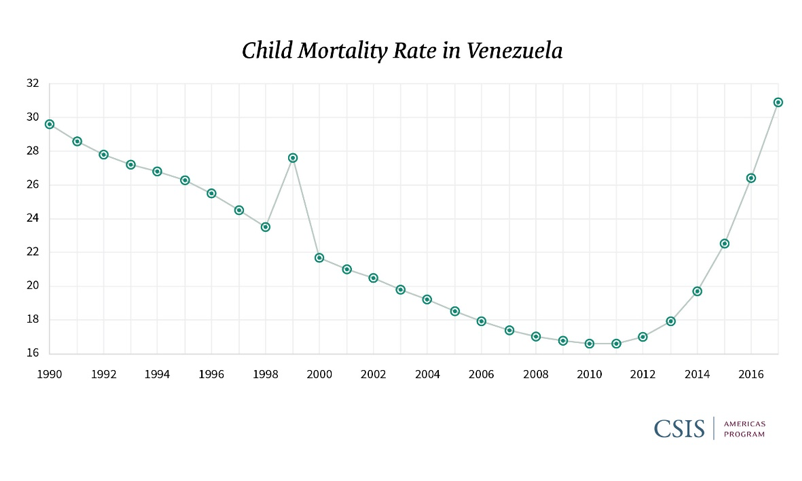 The impact of the water crisis has impacted the mortality rate of children under five years of age. Their mortality rate in 2017 was 31 deaths per 1,000 live births, a level higher than in 1990 and that is worse than countries such as Cambodia and Bangladesh. According to the UNICEF report, had the mortality rate for children stayed where it was in 2010, 12,000 fewer children would have died in 2017. According to the World Health Organization (WHO), improving access to water, sanitation, and hygiene can help prevent child mortality in Venezuela.

Challenges of the Water Crisis in Venezuela

The following are key challenges to mitigating the damage of the water crisis in Venezuela and to planning a coordinated response to rebuild the country’s water management system.

1. Absence of Water and the Impact on the Country’s Health System2

There is a direct link between the absence of clean water and diarrheal diseases, which are the causes of infant and child mortality. Insufficient potable water and poor sanitation within Venezuela have also contributed to a rise in cases of Hepatitis A, malaria, and dengue, among other vector-borne diseases. Preventable childhood diseases, such as diphtheria, have returned. Between 2016 and 2018, about 1,249 cases of transmission diseases have been confirmed—after 24 years of full eradication. Between 2017-2018, there were about 6,400 confirmed cases of Measles, according to the Pan American Health Organization (PAHO). Infant, child, and maternal mortality have all reached levels not seen in Venezuela in decades.

Corruption, lack of maintenance, and departure of trained professionals have left the water infrastructure in Venezuela in a deplorable state. Without institutional capacity, monitoring infrastructure and management system conditions have been a taxing task for all stakeholders. As a result, water systems are operating at half their capacity and are unable to regularly provide safely treated water to nearly 90 percent of the population. 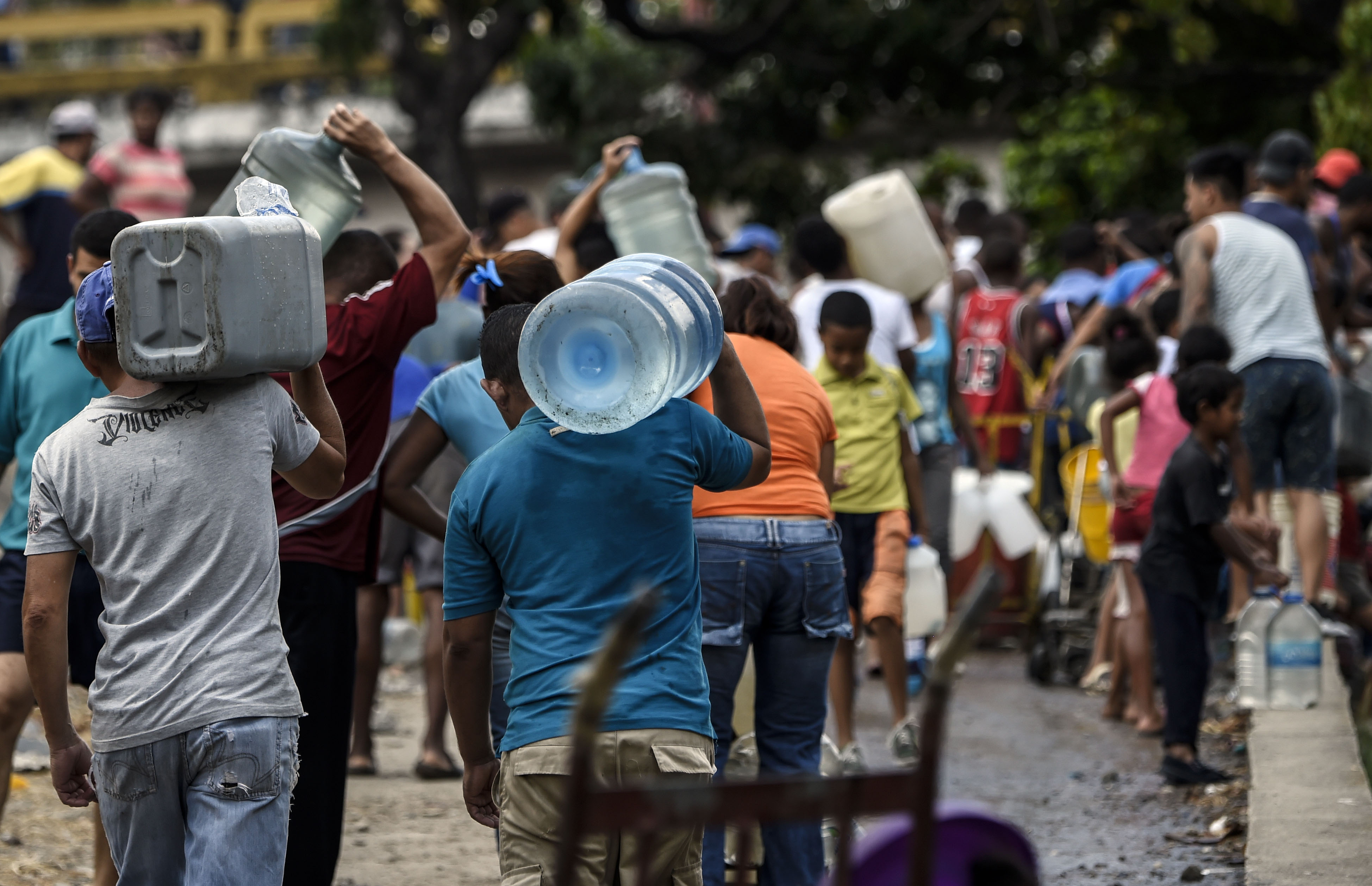 Caption: People carry cans and buckets to collect water from a broken pipe, flowing into a sewage canal at the Guaire river in Caracas on March 11, 2019, as a massive power outage continues affecting some areas of the country.

Similarly, developing an emergency plan to restore public services, such as access to water and sanitization, would be key to alleviating the suffering of the Venezuelan people. Venezuela currently lacks social infrastructure and has demonstrated an inability to meet basic humanitarian needs, particularly with respect to access to clean water. Not only is the massive restoration of the infrastructure a multi-year and multi-billion-dollar challenge, but in parallel fashion, the new government will need to build strong institutions and partnerships at every level to be able to maintain and manage the renewed water and humanitarian response system.

A significant barrier in constructing a strategic plan is the significant brain drain that has occurred in Venezuela. About 15 percent (4.5 million) of Venezuelans have fled the country since 2015, including many of the engineers, scientists, medical professionals, and business leaders who are needed to rebuild the country. It is also imperative to retain talent and expertise, as it will be difficult to close the talent gap once the reconstruction period begins. For perspective, in Chile 64 percent of the approximately 85,000 Venezuelan residents registered in 2017 had an undergraduate or graduate degree. The electricity sector in Venezuela has suffered from the brain drain, as more than 20,000 employees working for Corpoelec, the Venezuelan electrical sector, have fled.

There is an absence of data and analysis on the challenges and needs of the water distribution network. It is vital to conduct thorough fact-finding missions to be able to assess the crisis and understand how to respond. Gathering such data requires engagement with local communities via monitoring and evaluation instruments and conducting field research in conjunction with funding from international financial institutions, including the Inter-American Development Bank (IADB) and the World Bank. In addition, local communities would benefit from best practices in water usage, integration, and operation.

Absence of reliable electricity and power is a critical factor to maintaining availability of water to cities across the country. The most recent nationwide blackout occurred on March 7 and lasted 90 hours, affecting most of the country. In October 2016, there was another power outage that affected 16 of Venezuela’s 24 states, and in 2017 alone, reports show there were more than 18,000 power outages throughout the country. As Plan País experts explained during the conference, the gaps in electricity and energy mean that there is no power on a regular basis to pump water through the system, nor to power treatment plants. Restoring the electrical grid in such a way that is more impervious to cyberattacks or political manipulation will be crucial to the long-term maintenance and operation of water treatment plants in Venezuela.

$400,000,000
The amount of money Venezuela would approximately need the first year to initiate both an initial and long-term response for the rehabilitation of water sanitation and the restoration of a reliable water supply, according to Plan País experts.

13 gallons/habitant
About 50 liters or 13.2 gallons will be required per person to meet the emergency needs in all cities in Venezuela, according to Plan País experts.

Venezuela requires international support to relieve the suffering of its citizens. Extensive and immediate political, economic, and institutional reforms, backed by significant international humanitarian aid and technical and financial assistance, are crucial for the stabilization and recovery of Venezuela. Once there is a transition to a post-Maduro era, or a “day after,” the immediate objective is to relieve the current catastrophic conditions affecting the health and well-being of the Venezuelan people.

The United States, multilateral institutions, and the international community will need to play an essential role to help stabilize Venezuela during an initial response (the first six months of the post-crisis transition), during a second phase (the following three years), and in the long term (over the next decade and beyond) to foster sustainability. It is evident that to promote inclusivity, stability, security, and prosperity in Venezuela, access to water and sanitation is essential. Without potable water, schools and hospitals cannot operate, the economy does not advance, and the Venezuelan people, especially the most vulnerable, suffer.

From the first day of recovery, ensuring access to water and sanitation for all, national civic education, information dissemination, and public participation will be crucial. However, the next Venezuelan democratic government, whenever it arrives, will not be able to accomplish all of this alone. Venezuela will require sustained and coordinated international support. In addition to providing for emergency humanitarian needs and fostering long-term development programs, the country faces a severe crisis without clean water and adequate sanitation.

The authors are grateful to Katherine Bliss, a senior fellow at the Global Health Policy Center at CSIS for reviewing a draft of this paper, providing valuable insights, and for participating in the panel and moderating a roundtable during this project.

We are grateful to José María de Viana, Juan Andrés Mejía, and Daniel Sierra from Plan País for their close support and collaboration throughout this process.

We would also like to extend a sincere thanks to the 60+ participants of our working groups and private roundtables at CSIS. Each individual added new insights and complexity to these issues, and we are grateful for their time and expertise.