The notion that President Donald Trump and Prime Minister Narendra Modi’s shared political characteristics would ensure continued progress in building ties between the United States and India is visibly falling apart. Though leaders in both countries reiterate the standard line that they prioritize the other, in a more practical sense we have seen increased frictions in the last six months. The United States is turning up the heat on India on commercial matters, while India expands its vision of “Make in India” and is courting additional global relationships with new vigor. The Modi-Trump summit on June 26 is a singular chance to get an early, favorable course correction. At risk is a possible four-year freeze in ties, with increased friction on trade and backsliding on past commitments to cooperation. The meeting will provide more clarity on whether the past six months have been Act 1 in a surprising friendship or Round 1 of a protracted slugging match.

The underlying rationale for a robust U.S.-India partnership remains strong. A more powerful India, acting in its own self-interest, will provide much-needed balance in Asia. In the last three years, our two nations have found common cause in pushing for a global environmental accord. Former U.S. defense secretary Ashton Carter set in motion productive security talks with his counterpart, resulting in critical agreements that strengthened our military ties. And though the two governments were unable to forge a common vision for economic ties, we have managed to avoid any major flare-ups since 2013.

New Delhi is slowly starting to realize that the U.S. political transition this time is unlike any change in government of recent decades. The tired trope that relations “have been supported by Democrats and Republicans alike,” while holding a kernel of truth, has no bearing on our current situation. President Trump has forged a set of core policy priorities focused on domestic constituents who believe globalization has harmed U.S. interests. There have been multiple shots across India’s bow; first, in early April, President Trump ordered a review of trade policies for the countries with which the United States has large goods trade deficits, including India. Second, the April 18 “Buy American, Hire American” executive order called for a review of existing immigration rules to alter the H1B visa system. And third, India (and China) were highlighted during President Trump’s Paris Agreement withdrawal speech, claiming India’s participation came in return for billions of dollars in remuneration. That sentiment is certainly not shared in Delhi.

At the same time, U.S. companies are raising their voices in Washington, D.C., about a range of trade grievances with India, some old and some new. Old issues include calling for India to adopt stronger patent standards, relax local content regulations, and avoid the establishment of India-specific product standards. Newer issues include new product price controls and the expansion of local content mandates (particularly for government procurement). Because these regulations could restrain U.S. exports, companies believe the Trump administration will readily take up their cause—and early indications seem to vindicate this belief.

As for the defense relationship, there is a bit more hope. Defense Secretary James Mattis regularly notes India’s importance to regional security and highlights recent progress. Still, the relationship requires regular, sustained, cabinet-level engagement to make progress. The Indian system simply does not empower mid-level officials to take important policy decisions. Former secretary Carter met with Minister Manohar Parrikar more than any other counterpart, providing regular opportunities to engage India at the political level. To maintain this momentum, Secretary Mattis would have to engage India at a similar pace—a tough task considering other pressing global concerns.

There is great scope for increased cooperation in other areas. Our Homeland Security Dialogue should be reinvigorated, providing a platform to share practices guarding against all forms of terrorism. Our new Framework for the U.S.-India Cyber Relationship holds great promise. And though we can expect some adjustments to our energy partnership, India is undertaking a massive overhaul of its energy sector, and the United States should find ways to remain engaged, even if a global climate deal is not the primary underpinning for cooperation.

India has been hedging its bets, renewing ties with older partners, and engaging potential new ones. Both Prime Minister Modi and Minister of Defence and Finance Arun Jaitley have visited Russia. Prime Minister Modi will shortly make his maiden visit to Israel. France, Germany, and Spain have also had leader-level summits in recent months. Discussions with this group of leaders has run the gamut of strategic issues, from defense and nuclear cooperation, India’s inclusion in global nonproliferation regimes and the UN Security Council, and economic ties.

Ahead of the first Trump-Modi summit, U.S.-India relations are on uncertain footing. There is not yet a visible, cabinet-level leader in the United States willing to take up this relationship as a priority. Trade concerns on both sides are growing. The June 2017 summit must focus on establishing the new priority areas for cooperation. The strength of this relationship is an important component of Asia’s regional stability, and both leaders must ensure that recent momentum is maintained.
Photo credit: SAJJAD HUSSAIN/AFP/Getty Images 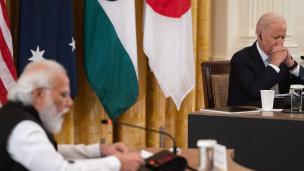 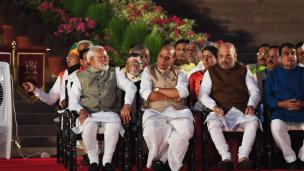 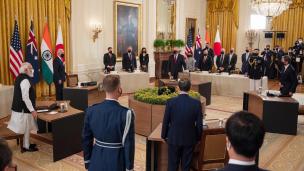 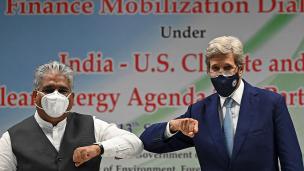 U.S.-India Insight: U.S.-India Climate Cooperation: Help Where It Hurts
By Richard M. Rossow
October 18, 2021
View all content by this expert