The current crisis in Iraq is partly the result of the failures by its current leadership and political figures, the legacy of the fighting against ISIS, and the result of short-term policy decisions. It is also driven, however, by a range of civil forces that are the result of long-term structural problems that have led to major political upheavals and conflicts throughout the region, that lead to the rise of extremism and terrorism, and that affect every aspect of Iraq’s present and future.

Iraq is scarcely the only case in point. The same long-term civil challenges have limited U.S. success in its other “long wars” in Afghanistan, Iraq, and Syria — as well as in more limited involvements in nations like Libya and Yemen.

The Burke Chair at CSIS is issuing an analysis that focuses on the fact that all five states have deep structural problems that make them “failed states” in many similar areas of governance, major social changes, and development. It shows that these failures are so serious that they make the “host country” or national government a key cause of civil unrest and conflict and – in many ways – as much of a threat as the extremist and terrorist movements the U.S. is seeking to defeat.

The analysis is entitled Afghanistan, Iraq, Syria, Libya, and Yemen: The Long-Term Civil Challenges and Host Country Threats from “Failed State” Wars , and it is available on the CSIS web site at https://csis-website-prod.s3.amazonaws.com/s3fs-public/publication/191025_Civil_Side_Failed_Wars.pdf.

The analysis warns that these same structural problems are likely to shape many new civil conflicts and outbreaks of extremism, terrorism, and civil conflict in the MENA region, South Asia, and Central Asia. It also warns that there will be powerful and enduring destabilizing forces regardless of how successful the U.S., its partners, and the host country are in terms of defeating terrorist movements and insurgencies.

Afghanistan, Iraq, Syria, Libya and Yemen — and many of their neighbors — not only have extremely poor governance, and high levels of corruption, they are under intense pressure from increases in population, urbanization, and social change that go far beyond their current problems with any given groups of extremists. These problems are so serious that they are likely to lead to further extremism, and civil conflict for at least the next decade.

They also are so serious that no attempt at dealing with major threats from extremism, terrorism, or insurgency can be successful if it only focuses on the security and military dimensions of such threats. The same is true of any efforts that focus on peace negotiations and short-term recovery aid. “Nation-building” does impose massive challenges of its own, but ignoring the forces that create “failed states” will not only make any truly successful effort at conflict resolution impossible, but will almost ensure the rise or resurgence of terrorism and civil conflict.

This analysis does not attempt to simplify the range of factors involved or to find a single set of main causes of extremism, terrorism, and insurgency. It does not attempt to offer simply or optimistic answers to problems that need far more in-depth analysis, and where it may be impossible to find truly workable solutions until a given state is finally driven to the point where it is ready to help itself. In the real world, the only practical choice may be to contain the threats in a given country to its own territory – a form of strategic triage that must give priority to countries that are actually willing to address their civil challenges and have the unity to act.

The goal of this analysis is to demonstrate the full level of complexity involved, and to suggest that any successful effort must look beyond defeating current enemies, look beyond current military and security trends, and look beyond the more immediate and topical civil causes of extremism like leadership, politics, and extremist ideologies.

The analysis focuses on exploring the deep structural reasons these five nations have become “failed states,” and comparing the civil trends involved. Its Table of Contents is shown below, and it shows that the study focuses on the civil side of civil-military relations. It attempts to find quantitative metrics that illustrate the importance of each key factor, and examines key longer-term trends in the following forces that will make Afghanistan, Iraq, Syria, Libya, and Yemen enduring problems:

The analysis indicates that these civil forces are so important that the ability to help a given country deal with these longer-term challenges in civil-military affairs will be as important in achieving any kind of lasting victory and ongoing stability as military success and dealing with shorter term civil issues like politics and leadership.

It also shows why U.S. military efforts in Iraq, Syria, and Afghanistan, Libya, and Yemen that focus too narrowly on security, counterterrorism, and counterinsurgency will not lead to real victories in terms of conflict resolution or to lasting favorable outcomes and national stability. The United States cannot win in any of these countries by fighting half a war – focusing on the direct enemy rather than the flaws in the host county it is trying to aid, and by focusing on the security sector rather than the civil one.

More broadly, the forces that helped turn Afghanistan, Iraq, Syria, Libya, and Yemen into “failed states” that do not meet the basic needs of their peoples are common to far too many other states in the developing world. While this study does not examine such cases, it is also clear that similar forces have helped shape violence and extremism in a wide range of African states, in Pakistan and several Central Asian states, in countries as diverse as Nepal and Cambodia, and in nations like Columbia and most Central American states. The “failed state” problem is not the function of a given culture or religion. It is a function of broader forces that affect all too many countries throughout the developing world.

If the U.S. is to limit the growth of extremism and terrorism, and new civil wars and insurgencies, it must look at Afghanistan, Iraq, Syria, Libya, and Yemen as case studies in the causes of instability and such threats to American interests and the American Homeland. It must work with other states to address such civil challenges, both to limit the rise of new threats and limit its involvement in future wars. 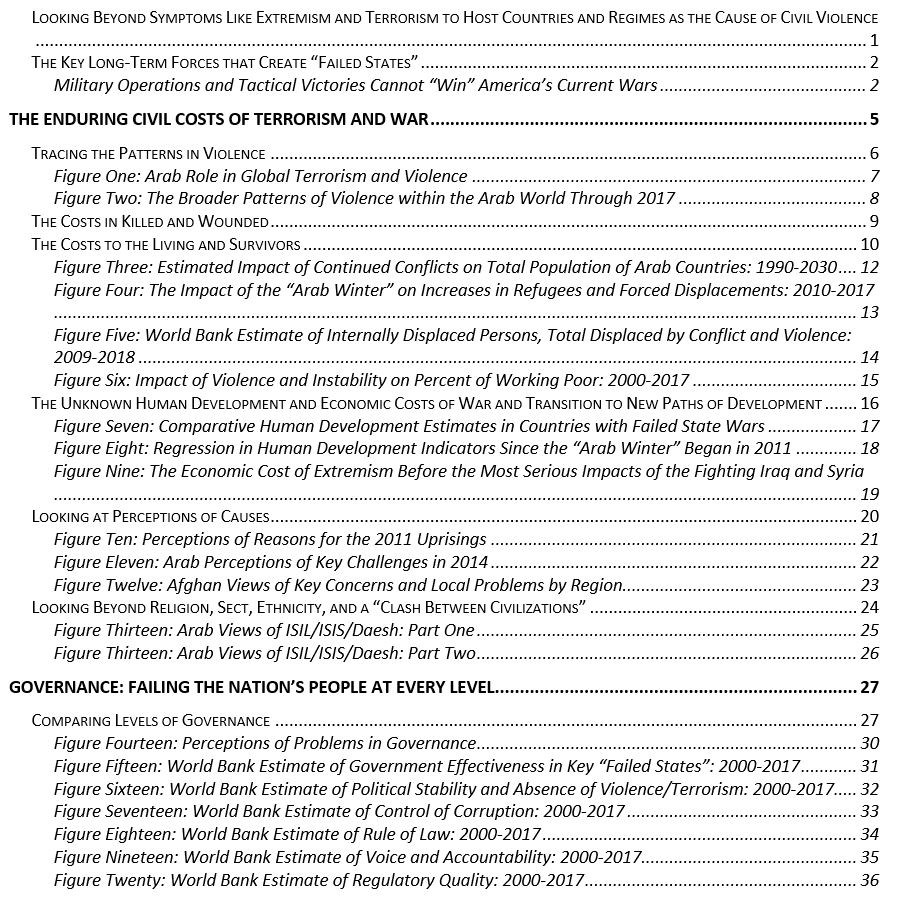 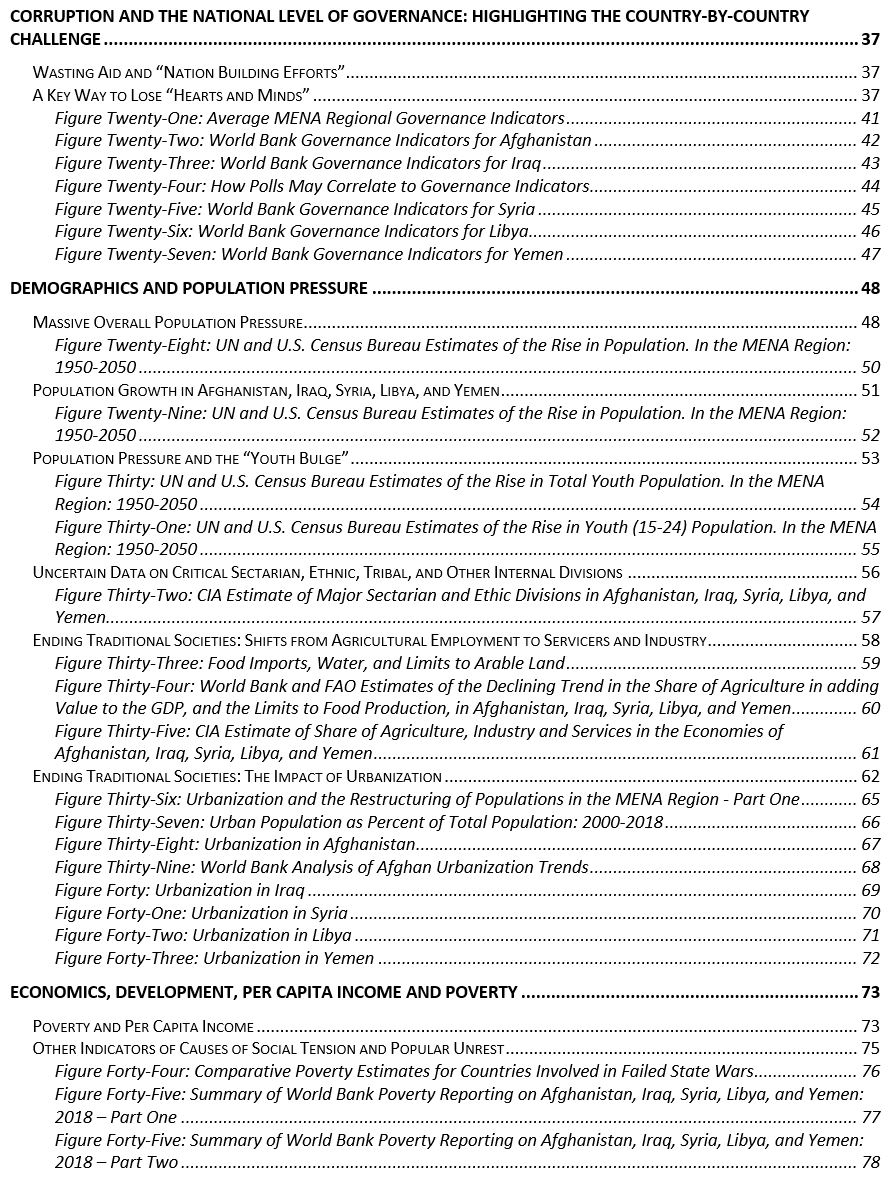 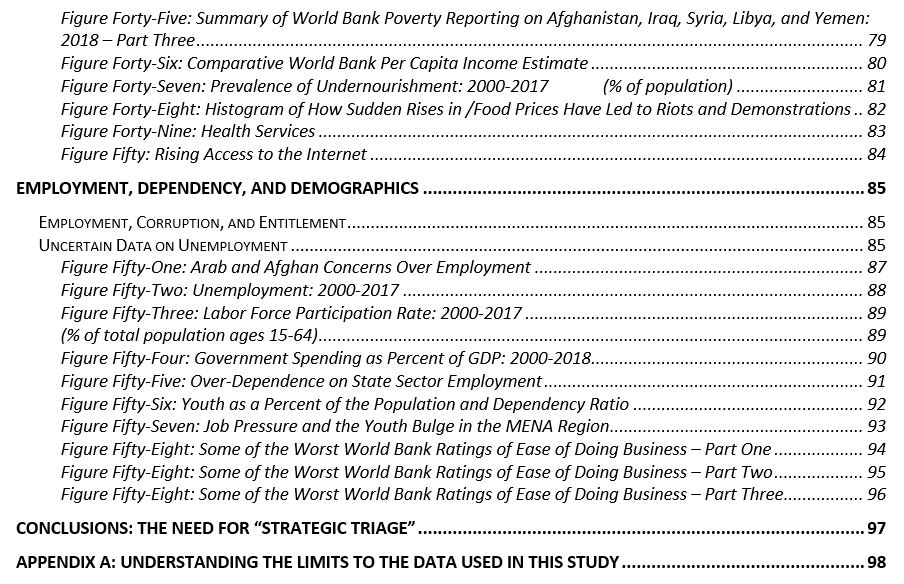