The Bahrain Defence Force: The Monarchy’s Second-to-Last Line of Defense

Bahrain is a key ally of the United States that provides key naval and air facilities for U.S. forces, and is the location of the headquarters of the U.S. Fifth Fleet. It is also a troubled country, with deep divisions between its ruling Sunni elite and Shi'ite majority, and one troubled by Iranian interference and ties to some elements in its Shi'ite population.

Zoltan Barany, a Senior Associate to Burke Chair has written a detailed analysis of Bahrain’s security forces, their ties to Saudi Arabia and the other Gulf states, ties to the United States and Britain, and the challenges posed by Iran. This analysis is entitled "The Bahrain Defence Force: The Monarchy’s Second-to-Last Line of Defense," and is available on the CSIS web site at http://csis-website-prod.s3.amazonaws.com/s3fs-public/publication/161214_Bahrain_Defence_Force.pdf.

The report seeks to paint a comprehensive portrait of the Bahrain Defence Force (BDF), the monarchy’s principal military organization. It examines the BDF’s place in the monarchy, focusing on the role of the state and the royal family while also devoting attention to its mission, effectiveness, composition, and foreign relations. The BDF is a highly professional, well-equipped, and, judging by the available evidence, effective army. Nevertheless, it is virtually closed to Shi’a Muslims, the majority of Bahrainis, who are considered potentially disloyal to the monarchy and therefore are shut out from armed service.

Two sections of the report analyze the BDF’s role in the 2011 uprising—the only major upheaval among the eight Arab monarchies—and reform proposals and outcomes in its aftermath. Although the uprising was brutally suppressed, the BDF did not participate in the crackdown but secured strategic areas cleared by other law enforcement agencies. In the wake of the disturbances the regime did implement some of the recommendation of the Bahrain Independent Commission of Inquiry (BICI), but it held to account few culpable individuals and has failed to address the underlying problems that inspired the revolt.

The report makes three principal arguments. First, Bahrain’s army is the army of the royal family and is not a national army. Second, the BDF’s participation in the suppression of the 2011 uprising was minimal; that task was mainly executed by the National Guard and the police. Third, the Bahraini state, and by extension, its military, has been impacted more than any other army involved in the Arab Spring—and quite possibly more than any of its Arab counterparts—by its external environment which should hardly be surprising given Bahrain’s size, location, and geostrategic significance.

The BDF is also in the unique situation that while it is the army of an autonomous state, the monarchy it serves is highly dependent for its prosperity and security on its much larger, richer, and more powerful neighbor, Saudi Arabia.

The table of contents of the report includes: 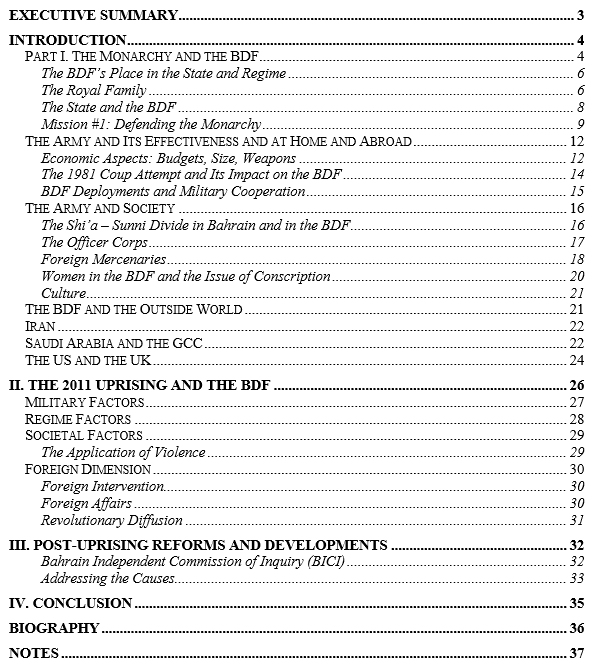