Rajasthan is the largest state in India by area, much of it covered by the sun-drenched Thar desert. With a population of 75 million people, historically the state has lagged on several human development indicators. Successive governments have focused on improving inter-state and intra-state connectivity while unleashing policies to attract manufacturing service industries. Besides being the number one tourist destination in the country, the state is leveraging its geostrategic location to help develop manufacturing clusters along India’s dedicated western freight corridor that will link Delhi to Mumbai. Given the topography of the land being less suited for agriculture, the procurement of land for large-scale infrastructure such as utility-scale wind and solar installations is less of a problem for Rajasthan. The state hopes to leverage having the highest solar radiation in the country and strong winds in the western quarter to become an exporter of renewable energy, specifically 40 gigawatts (GW) of solar, to the rest of the country in the next four years.

Rajasthan has increased the share of the population with electricity access from 71 percent in 2015 to 100 percent in 2019. An important measure of the health of the state’s electric power sector is aggregate technical and commercial losses (AT&C), which measure line losses from transmission and distribution equipment, power theft, billing and collection inefficiencies, and customers’ inability to pay. The average AT&C losses for Rajasthan’s utilities in 2013 were 26.74 percent. Under the state’s Power for All plan formed with the central government, the state’s utilities are targeting average AT&C losses of 15 percent in 2019. The utilities have been able to reduce their losses but have not yet achieved their target. The current AT&C loss rate is 21.29 percent. 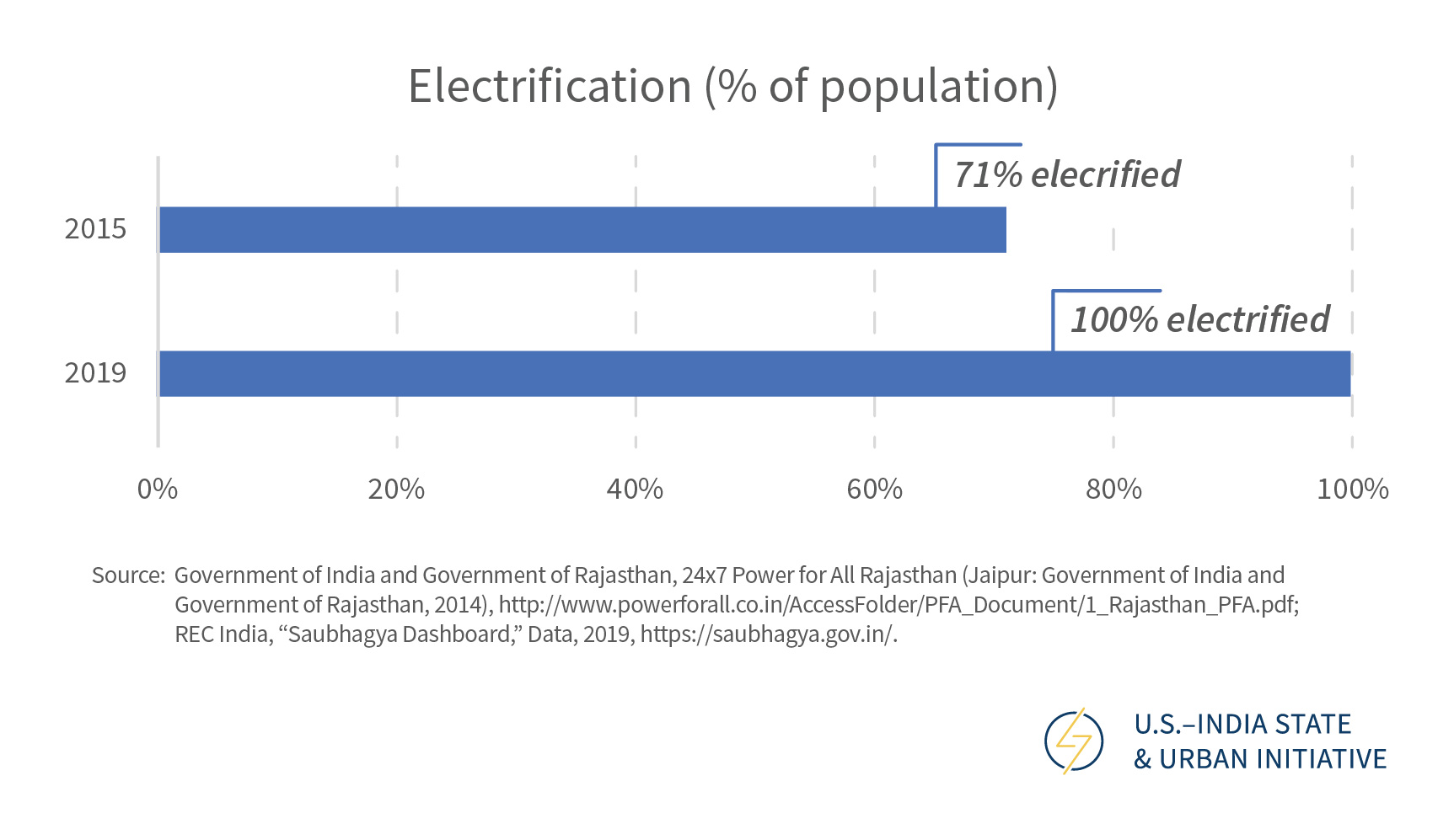 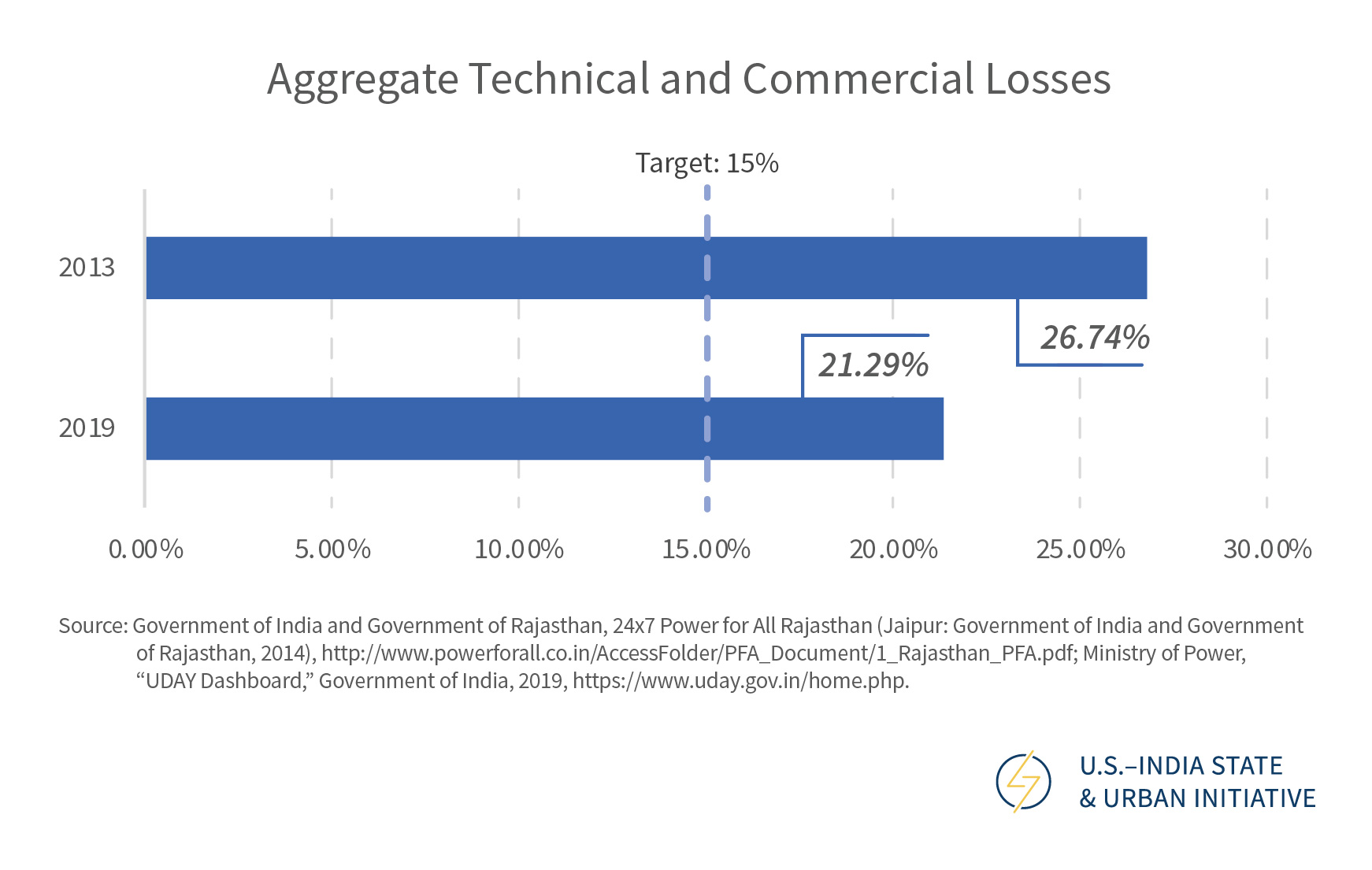 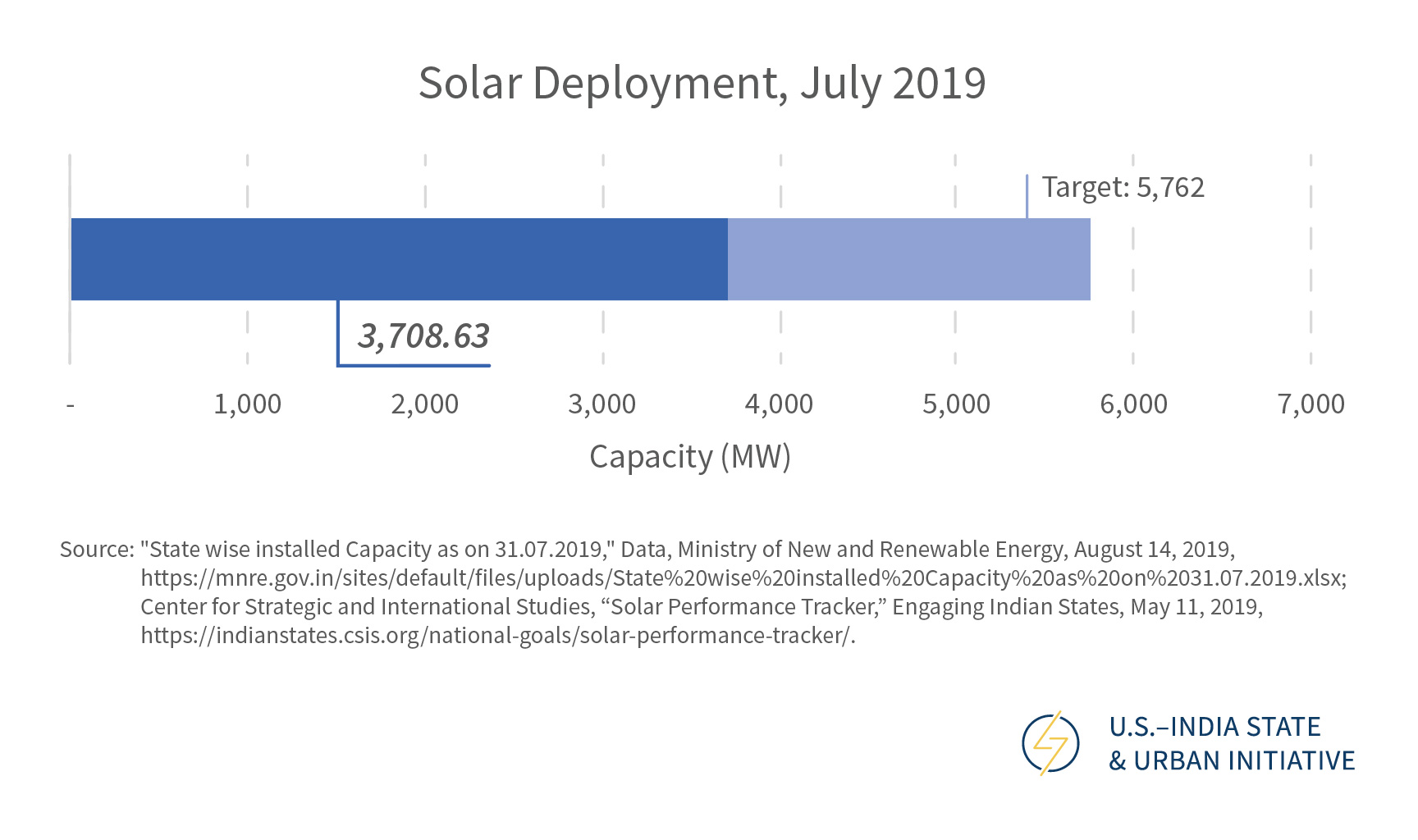 Rajasthan has a target to install 5,762 megawatts (MW) of solar power in the state to contribute to the central government’s target of 100 gigawatts by 2022. As of July 2019, data from the Ministry of New and Renewable Energy indicate it has installed 3,226.79 MW, 56 percent of its goal.

Over the past few years, despite reducing its Renewable Purchase Obligation (RPO), Rajasthan has worked on deploying solar and adjusting its net metering policy for rooftop solar. The state has also focused on increasing agricultural connections and improving the distribution of electricity. The state also seized upon a unique opportunity to form a strategic energy partnership with the U.S. state of Utah.

Rajasthan has had a Renewable Purchase Obligation (RPO) for solar, wind, and biomass since 2007, but has struggled to meet it. For example, in the 2016-2017 financial year, the state’s distribution companies (discoms) were supposed to buy 11.4 percent of power from these sources, but they only achieved 9 percent. For 2018-2019, the state’s electricity regulator reduced the total RPO from 17 percent to 13.35 percent and the solar-specific obligation from 6.75 percent to 4.75 percent in January 2019. Although Rajasthan’s utilities have not been able to meet their targets for purchased power, new capacity is being built in the state. Rajasthan is home to what will be the world’s largest solar project—the 2,255 MW Bhadla Solar Park—and more developers are looking to take advantage of Rajasthan’s high solar irradiance. A 750 MW tender issued by the central government-run Solar Energy Corporation of India in August 2018 was oversubscribed by 1,620 MW. Ultimately, five companies won the auction with bids as low as Rs. 2.48 ($0.035) per kilowatt-hour (kWh). Rajasthan has also implemented regulations to incentivize rooftop solar. The state has had a policy to credit customers with rooftop solar for the power they generate—a practice called net metering—since 2015. In March 2019, the state’s electricity regulator capped the amount of electricity eligible for compensation at 4.8 kWh per kilowatt of installed capacity per day.

Rajasthan has emphasized providing power to agricultural consumers in recent years. In July 2018, Rajasthan’s discoms announced they would expedite the connection of farmers who did not yet have access to power. This was intended to help provide reliable power supply during the monsoon season. In October 2018, ahead of state elections, the then-Chief Minister of Rajasthan announced that the state would reimburse its more than 1.2 million farmers up to Rs. 833 ($12) per month for their power. This would make electricity essentially free for most farmers.

The Rajasthan government has sought to improve the distribution of electricity, both by improving the operations of the sector and by upgrading its infrastructure. In September 2018, the World Bank announced a $250 million loan to the government of Rajasthan to help improve the performance and financial health of the state’s discoms. The terms of the loan included instituting a performance management system, implementing performance improvement incentives, transferring a major amount of debt from the discoms to the state government, reducing procurement costs, and initiating the use of new information technology systems, among others. In March 2019, General Electric announced that Rajasthan would become the first state in India to use their Advanced Energy Management Systems. The technology will provide real-time monitoring of energy usage to help the state’s discoms increase distribution efficiency, integrate renewable energy, and make more informed decisions about transmission and distribution.

Also of note, in August 2019, the government of Rajasthan signed an agreement with the government of Utah to advance policy exchange, research collaboration, and private sector ties between the two states on issues such as renewable energy integration, energy storage, and electric mobility.

To follow the reforms and initiatives in Rajasthan’s power sector, please visit: https://indianstates.csis.org/states/rajasthan/.

In September 2017, Prime Minister Modi announced the Saubhagya Scheme, an ambitious effort to provide electricity to the 40 million households who still lacked access. The government announced the completion of the initiative in early 2019. Now that Rajasthan has connected 100 percent of its population to power, the state’s focus is on guaranteeing consistent, reliable power. Grid managers are struggling to match demand with supply and maintain voltage across the entire transmission and distribution system. One government official suggested installing solar projects at the 33-kilovolt level of the distribution grid, a solution that Madhya Pradesh has successfully implemented. Multiple stakeholders suggested that there is little consumer interest in new off-grid solutions in Rajasthan because of the central and state governments’ heavy focus on grid connections over the past few years. However, servicing requirements for those living far from the grid and dependent on off-grid energy technologies will continue to persist.  The focus of some of these off-grid energy technology providers has shifted toward the business models for deployment of more efficient direct current (DC) appliances to the rural as well as urban market to stimulate demand for electricity consumption.

Other areas of focus for the state’s power sector include energy storage and hybridized solar-wind technology use, for which the government recently released a draft policy for public comment and electric vehicles. Initial conversations around the electrification of the state’s transportation sector have begun in Jaipur, led by the Jaipur Development Authority and the state’s road transport corporation. A statewide electric vehicle policy could be drafted for public comment in the coming year.