The Evening: Coronavirus US, Netanyahu, Ripple and More

The epidemic continues to expand rapidly outside China. All six of the U.S. deaths have been in Washington State, and four of the victims came from a single nursing home, as the NYT reports.

U.S. military leaders cautioned Monday that some level of violence is likely to continue in Afghanistan despite a major new agreement with the Taliban, as the Washington Post’s Missy Ryan, Susannah George and Haq Nawaz Khan report.

Greece rushed more soldiers and border guards to its eastern border in an attempt to hold back thousands of migrants after the Turkish government said it would no longer prevent refugees in Turkey from reaching Europe, as the WSJ’s Raja Abdulrahim and Drew Hinshaw report.

“The Chinese bought us a month of time to prepare ourselves by imposing these astonishing and draconian measures. Unfortunately, we didn’t make good use of that time and now we’re heading into a very dangerous situation.” 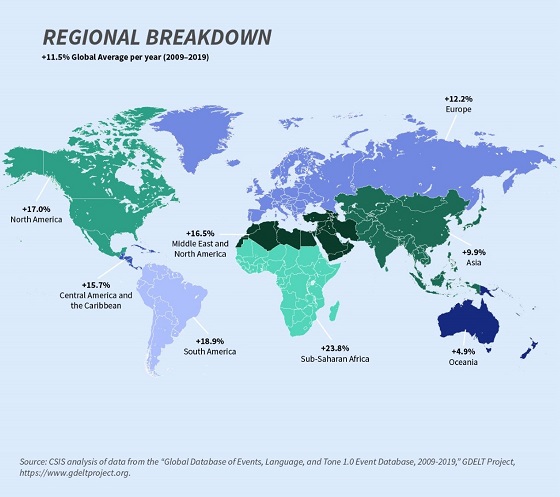 Between 2009 to 2019, mass protests increased annually by an average of 11.5% around the world. Read the new CSIS report on the age of mass protests. 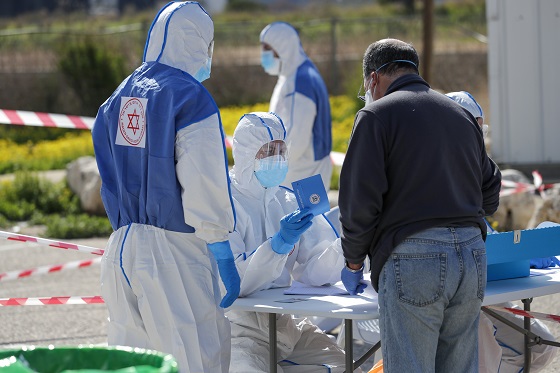 (Photo credit: Ahmad Gharabli/AFP/Getty Images). An Israeli man arrives at a polling booth specially erected for the 5,600 voters under quarantine, many of whom visited countries where the coronavirus COVID-19 is prevalent.

Tomorrow, at 8:00 a.m., CSIS will host a timely conversation with Senator Angus King (I-ME) and former Undersecretary of the Army Patrick Murphy on election security and societal resilience recommendations.

Later, at 12:00 p.m., the Hudson Institute will hold a discussion on American foreign policy, focusing on China, the broader American strategy in the Indo-Pacific region, and other challenges facing the U.S. across the globe.

And, at 12:30 p.m., the Middle East Institute will facilitate a panel discussion on pathways to a sustainable U.S.- Pakistan relationship.

Last week, I sat down with CSIS's Steve Morrison, Jude Blanchette, and Stephanie Segal to discuss how the coronavirus outbreak, also known as COVID-19, is impacting the global economy, health security, and international politics.

“Let there be songs to fill the air.”

Some of our American roots music is as timeless as the people and the knowledge that inspired it. At 72, Bob Weir appears determined to transmit the music he’s performed professionally since his teenage years to new audiences and well into the future. Currently, Weir is on tour with “Bob Weir and Wolf Bros” performing in mid-sized theaters. He’ll do that until summertime when he reconvenes with the Dead & Company to play in stadiums. The relentless touring spreads the gospel, and the roots music Weir performs—whether it’s his own tunes, Bob Dylan’s or the Grateful Dead’s, sounds as vibrant and fresh as ever. Like this set Weir stopped by NPR’s Tiny Desk Concerts to perform.