It has long been all too clear that the U.S. has gradually built up the military capability to help local powers defeat ISIS in Syria and Iraq without having strategy for dealing with the host of other problems that exist in bringing any kind of lasting stability to the region. We are effectively fighting "failed state wars" in ways that only address half the problem.

The end result is that Syria and Iraq remain deeply divided. Rival outside powers like Iran, Russia, Turkey, and various Arab states compete with the U.S. for influence, and the sectarian, ethnic, economic, and other problems that helped lead to the rise of ISIS have grown worse with each year of fighting.

More broadly, all of the countries in North Africa and the Levant face critical economic and political challenges, Libya is divided by civil war, and Lebanon and Egypt face serious internal stability problems. The Gulf states are generally wealthier, but not necessarily more stable. The Gulf Cooperation Council (GCC) states are divided against each other, and Saudi Arabia and the UAE face growing challenges from the cost of their wars and military expenditures. Yemen and Somalia are also divided by civil wars, with governance and economic problems as great as their security challenges.

The U.S. may have won tactical victories against ISIS, but the broader stability of the MENA region continues to steadily unravel. There are few—if any—signs that the broad patterns of instability that have driven virtually all of the countries in the Middle East and North Africa since 2011 will discontinue their growth and impact on the region.

At the same time, it is equally clear that U.S. efforts to improve the allied train and assist mission in support of the Afghan National Security forces are not matched by credible plans to build effective Afghan political unity, effective governance, and an economy that can win public support.

The situation is no better in Pakistan, or in most of the countries in the Horn of Africa and Sub-Saharan Africa where the U.S. is providing aid to various host governments in fighting Islamist extremism, insurgencies, and civil wars. The mixes of failed governance, political unity, and economic development differ from country to country, but none have yet shown they can come to grips with their civil challenges and that defeating today's extremist threat will bring lasting stability.

Part of the problem lies in a U.S. failure to honestly assess the level of risk on the civil side of the struggle to bring some form of lasting stability to nations that are vulnerable to extremist movements and/or caught up in deep civil divisions and problems. The focus on the terrorist and military threat has produced some real progress in fighting ISIS, but the failure to understand just how serious failures are on the civil side—and dismissing the need for "nation building"—has led the U.S. to fight only half the "war."

The Burke Chair at CSIS has updated a summary report card on Instability in the MENA Region, Afghanistan, Pakistan, and Key Conflict States: A Comparative Score Card . The report has the following contents: 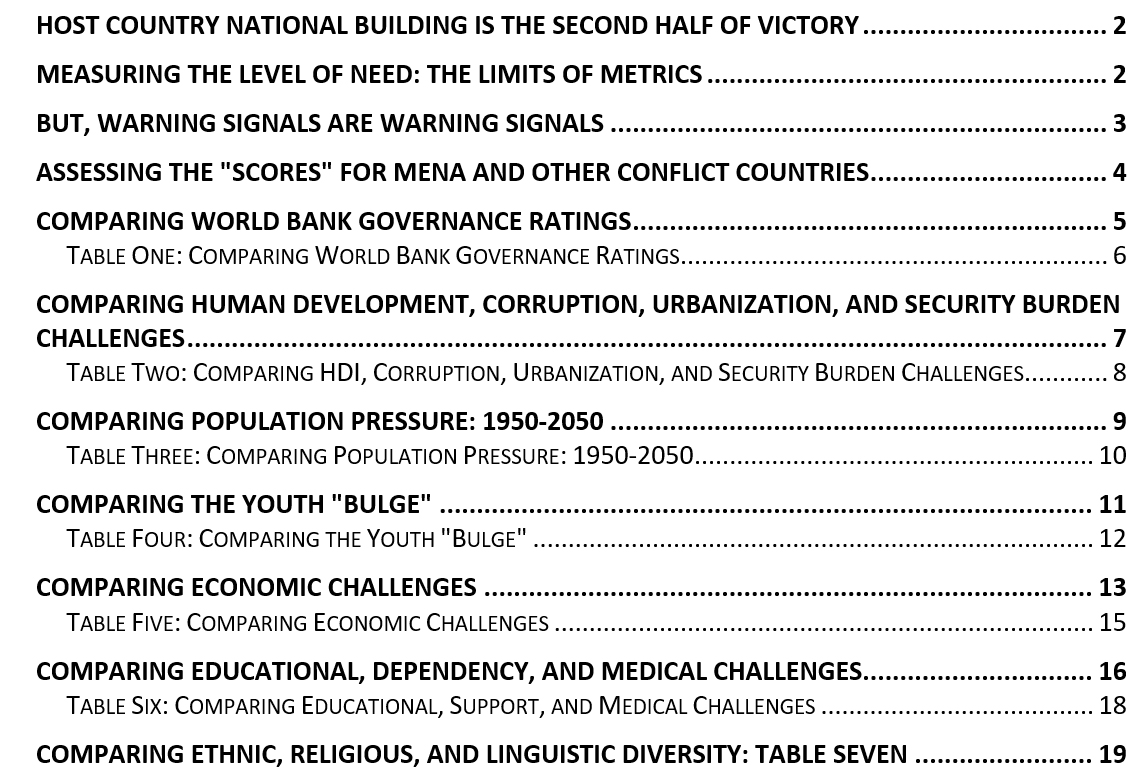 The report is available on the CSIS web site at https://www.csis.org/analysis/instability-mena-region-afghanistan-pakistan-and-key-conflict-states-comparative-score-card. As the Table of Contents shows, the report provides a wide range of metrics for each country in the MENA region and for Afghanistan, Pakistan, and a number of other conflict countries. The metrics it presents can only cover part of the problems in each country, but it is all too clear that each state faces critical civil challenges, and that a security-oriented strategy cannot bring stability to the region.