The Burke Chair at CSIS presents a new view of Islamic extremism and the Islamic world. The Burke Chair has carried out an analysis of the trends in global and regional terrorism, and the causes and impact of violent Islamic extremism. This analysis is entitled Rethinking the Threat of Islamic Extremism: The Changes Needed in U.S. Strategy and it is available on the CSIS web site at http://csis-website-prod.s3.amazonaws.com/s3fs-public/publication/170103_Islam_and_Islamic_Extremism.pdf

The analysis is supported by a wide range of data drawn from U.S. government, UN, World Bank, and NGO sources where the key statistics and data are presented in the various figures and tables in each section. It concludes that the United States needs to fundamentally rethink key aspects of its struggle against terrorism and Islamic extremism.

The United States has made great progress in improving its homeland defenses and international counterterrorism efforts. It has restructured its security partnerships with largely Muslim states to help them give the same emphasis to counterterrorism that they have given to military security. The United States is also making major progress in defeating the ability of ISIS to hold territory, act as a protostate, provide sanctuary for training fighters, and ISIS’s efforts to widen its grasp and number of affiliates.

At the same time, far too much of the U.S. effort is now centered around the immediate threat from ISIS, and the external threat it poses to the U.S. homeland and Europe. Far too few in the United States understand the importance of the strategic partnerships the U.S. has forged with largely Muslim states, the fact that the primary fight with Islamic extremism is inside Muslim states, and that it is a fight for the future of Islam—rather than the limited threat it poses to faiths and countries outside.

The threat of Islamist terrorism within the United States and Europe has been all too real, but it has only been a minor aspect of a far more serious series of threats it poses within the Islamic world. The fight is primarily a fight between moderate governments and popular majorities committed to Islam’s traditional values and extremists seeking to use almost any form of violence, and mix of terrorism and asymmetric warfare, to seize power. It is “clash within a civilization” and not a “clash between civilizations.”

The United States, Europe, and other non-Muslim states cannot defeat terrorism or the broader threat posed by Islamic extremism by trying to isolate themselves from Muslim countries, or treating Muslims as if violent Islamic extremists were more than a tiny minority of Muslims. Islam is growing too quickly, and is far too important a force within the world. Polls show that the vast majority of Muslims oppose extremist ideology and violence. Most Muslim governments are key partners in the fight against extremism and terrorism, as well as key security partners in dealing with other threats.

The key challenge to the United States is to revitalize its security partnerships, work with largely Muslim states, and develop better collective approaches to both the threat of extremism and other threats like those posed by Iran. The United States needs to show it can act decisively and is a partner that its partners can trust. At the same time, the United States must work with its Muslim security partners to help them address their own failings in developing effective counters to extremism, better efforts at collective defense, and their failure to fully address the causes of Islamic extremism.

Both the West and Muslim states have also focused too narrowly on the symptoms of
Islamic extremism rather than curing the disease. Movements like ISIS, Al Qaida, and the Taliban are the symptoms of the disease of extremism, and not the cause.

Far too little attention is still being given to key civil trends and problems within a steadily expanding Islamic world. These problems have been the key causes of Islamic violence and extremism, and the political upheavals within largely Islamic states that began in 2011. They include sharp population pressures, failed governance and corruption, ethnic and sectarian division, grossly inadequate economic development, massive unemployment and dead-end careers, and related issues that can feed extremism and violence for decades to come.

The United States—and both its Muslim and non-Muslim allies—need to focus on the fact that extremist violence can be contained and defeated in detail, but no lasting victory is possible until the causes of extremism are addressed as well as the fight against extremist movements. In practice, the forces that now divide the Islamic world will almost certainly make the fight against Islamic extremism part of a long struggle that will go on long after ISIS is defeated in Iraq and Syria. A struggle that will involve dealing with new movements and broader tensions between Sunni and Shiites and other minority sects.

The United States and Europe also need to address the forces that alienate Muslims in their own countries, and drive a tiny minority to violence. This cannot be done by excluding Muslims from entering their territory, letting prejudice and fear dominate security policies, and confusing the true teachings and history of Islam with extremism. Doing this achieves the very goal that extremist movements have in using terrorism: isolating Muslims from the rest of the world and pushing moderate Muslims towards extremism. The key must be better vetting, better cooperation with the governments in Muslim states in vetting and security procedures, and mobilizing the support of moderate Muslims in the United States and Europe. Partnership, not prejudice, is the answer.

This study draws on a wide range of related Burke Chair studies, including: 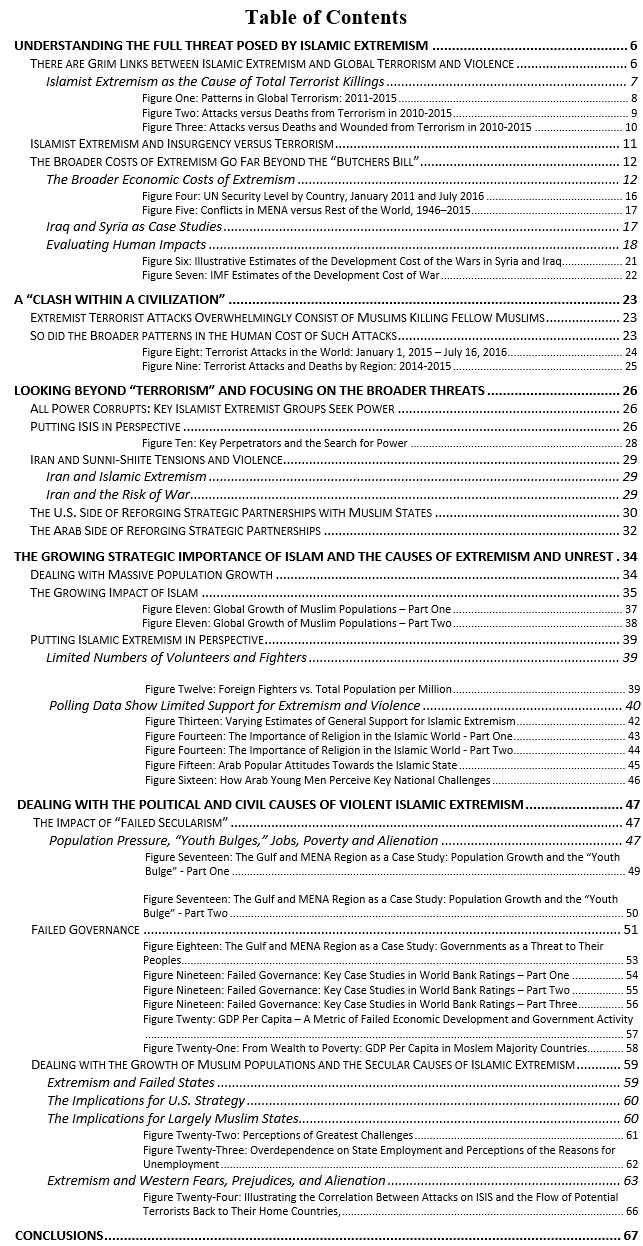 Broader Risk: Russian Control Over the Ukraine and Belarus
By Anthony H. Cordesman
December 8, 2021
In the News

Abu Dhabi’s dilemma: Will the UAE ever operate the F-35?
Defense News | Agnes Helou
November 8, 2021
View all content by this expert