The New State Department Report on Terrorism: Rethinking the Numbers and Coverage

The U.S. State Department issued its latest annual report on terrorism on August 19, 2018. The report updates its past estimates to cover 2017 and provides a separate Annex of Statistical Information that summarizes the global trends in terrorism. The report concludes that,

The total number of terrorist attacks worldwide in 2017 decreased by 23 percent and total deaths due to terrorist attacks decreased by 27 percent, compared to 2016. While numerous countries saw a decline in terrorist violence between 2016 and 2017, this overall trend was largely due to dramatically fewer attacks and deaths in Iraq. Twenty-four percent of all deaths in terrorist attacks in 2017 were perpetrator deaths, down from 26 percent in 2016. This statistic was historically much lower but began to increase in the 2000s, largely due to shifting tactics in Afghanistan and, to a lesser extent, in Iraq in the 2010s.

The Annex of Statistical Information also provides a summary graph of the trend in total incidents and deaths by month from 2012-2017 – a period that covers the failed U.S. attempts to disengage its combat forces from Iraq and Afghanistan as well as the period of worst fighting against ISIS. This graph is shown in Figure One, and the State Department statistical annex concludes that,

...the global trends in terrorist attacks observed in 2017 are the continuation of an overall pattern of decline that began in 2014 following a rapid increase in terrorist violence. This rapid increase was largely the result of violence carried out by ISIS and allied groups including Boko Haram in Nigeria, as well as the Taliban in Afghanistan. Likewise, the subsequent decline was primarily the product of decreasing levels of violence by these same groups. Despite these patterns, these groups remained several of the deadliest terrorist groups in the world in 2017.

There are good reasons to question both these conclusions and the way in which both the State Department main report and Annex of Statistical Information are structured. Reasons that raise serious questions about the way the U.S. is approaching the very nature of terrorism and its wars against extremism.

Describing Less than Half the Problem: Ignoring State Terrorism

This leads to a critical lack of coverage in a wide number of cases. Examples include:

The U.S. does separately examine a number of these issues in broad terms in the annual State DepartmentCountry Reports on Human Rights Practices and International Religious Freedom, but the present reporting on terrorism seems to cover fewer than half the problems, provides no basis for understanding the extent to which non-state action is provoked or sustained by state terrorism, and presents the threat almost solely in terms of non-state actors rather than addressing key causes of the terrorist and the threat it poses.

The Counterinsurgency Disconnect: Understating the Role of Non-State Actors

There is no "good" definition of terrorism in the sense that it can meet the different expectations, values, and goals of those who seek to define it. In broad terms, the criteria used by the State Department and START form as good a definition as any for terrorism committed by non-state actors that do not hold or control significant amounts of territory. They do not, however, apply to non-state actors that become strong enough to pose a serious insurgent threat, and/or control or influence a large amount of territory or the population .

This is critical gap at a time when many terrorist movements have come to pose a serious threat in terms of occupying or controlling territory (Afghanistan, Iraq, Syria), can threaten the existence of governments (Sub-Saharan Africa), or create or exploit a situation where there is no effective national government. (Libya, Yemen).

The U.S. is now fighting movements like ISIS, Al Qaida, and the Taliban with mixed success, as well as supporting a long list of countries in fights with their affiliates or other movements. In many cases, the threat has escalated from isolated or sporadic acts of terrorism to active insurgency or ongoing patterns of attacks that use both terrorism and other forms of violence to systematically undermine a given government.

The most serious case in point is ISIS, though the Taliban is a close second. Both have posed major ongoing threats in 2017. In the case of ISIS, it faced major defeats in serious fighting where it systematically used violence and intimidation to create human shields, sought to control the population, and systematically displaced or killed civilian opposition. Its seems likely, for example, that ISIS violence directly affected more civilians in the battle of Mosul alone in 2017 than were directly pressured or subjected to ISIS violence in any given previous year. Similarly, the Taliban posed its largest threat to civilians in 2017, and civilian casualties peaked in Yemen.

However, the State Department report and the Annex of Statistical Information do not take the broader fighting and levels of non-state actor violence into account, and conclude that a major cut took place in terrorism between 2016 and 2017:

A Nightmare of Conflicting Data

The patterns in the estimates provided by the Annex of Statistical Information emerge clearly in two Figures. Figure Two shows the estimated decline in deaths, injured, and kidnapped/hostages in the ten most violent countries. Figure Three shows the five perpetrator groups with the most attacks worldwide in 2017.

This, however, is only part of the problem in using such data. There are striking gaps and contradictions between the totals in Figure Two and Figure Three that are not explained in the Annex. If one compares the data in the two Figures, the totals for all main ISIS action worldwide accounted for only 44% of the attacks in Iraq alone, but it accounted for 102% of the killed, 80% of the injured, and 111% of the kidnappings and hostages.

The report highlights a number of trends for Iraq but does not attempt to explain them or even mention the massive increase in the fighting that took place between 2016 and 2017. It ranks Syria last in the top-ten score of violent countries and does not address the trends in that country.

It is also unclear that the report’s comments on national trends in Iraq draw on the same data based on ISIS as the top perpetrator data.

Somewhat similar problems emerge for Afghanistan. The total Taliban activity worldwide accounted for only 60% of the attacks in Afghanistan alone, but 93% of the killed, 65% of the injured, and 84% of the kidnappings and hostages. The report summarizes the trends in Table Two as follows, and again does not mention the heavy wartimes fighting in either year:

Any effort to go further and compare the Annex estimates to estimates of total wartime casualties reveals another set of problems.

Unfortunately, there are no official numbers that reflect the total patterns of violence in Iraq and Syria in 2016 and 2017. The UN stopped making estimates for Syria several years earlier. Iraq Body Count, however, provide respected NGO estimates for Iraq. Its totals for direct wartime casualties – which may exclude many terrorist casualties – are 17,578 for 2015, 16,393 for 2016, and a preliminary 13,387 for 2017. These totals are roughly twice the total deaths counted in the State Department Annex –which are 9,782 for 2016 and 4,269 in 2017. (https://www.iraqbodycount.org/database/).

The Syrian Observatory for Human Rights (SOHR) provides respected estimated for Syria. Its estimates for direct civilian casualties total 13,617 for 2016 and 10,517 for 2017 – which may be very conservative. These casualties compare with Annex estimates of 2,119 for 2016, and 1,096 for 2017 in the Annex data provide in Figure Two.

The situation is reversed in the case of Afghanistan. The UN provides widely accepted civilian casualty estimates for Afghanistan. These total 2,138 for the casualties caused by all threat elements in 2016, and 2,303 for 2017. The estimates seem very low for the scale of the ongoing fighting, and it is interesting that Table Two shows the Annex estimates 4578 for 2016 and 4,672 for 2017. it this case, the total casualties from war are only half the casualties for all non-combat terrorism.

Restructuring the Estimates of Terrorism

There are two obvious conclusions to draw from these figures. The first is the need to explicitly analyze the trends in state terrorism. The second is the need to tie the present method of defining and estimating terrorism to the fact that insurgencies and counterinsurgencies are having a massive impact on the role and levels of violence committed by non-state extremist groups. The present data on the most serious threat actors are too contradictory to be useful, and the problems would be even more severe if the estimates included a full breakout of the violence committed by non-state actors like Hezbollah or Iranian "volunteers."

Figure One: State Department’s annual Country Reports on Terrorism. Annex of Statistical Information Summary of the Global Trends in Terrorism in 2012-2017 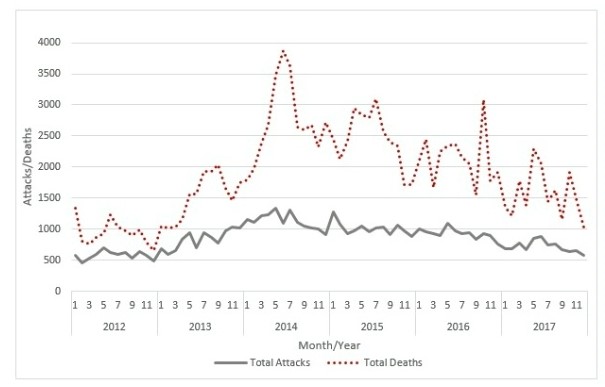 Figure Two: Ten countries with the Most Terrorist Attacks, 2017 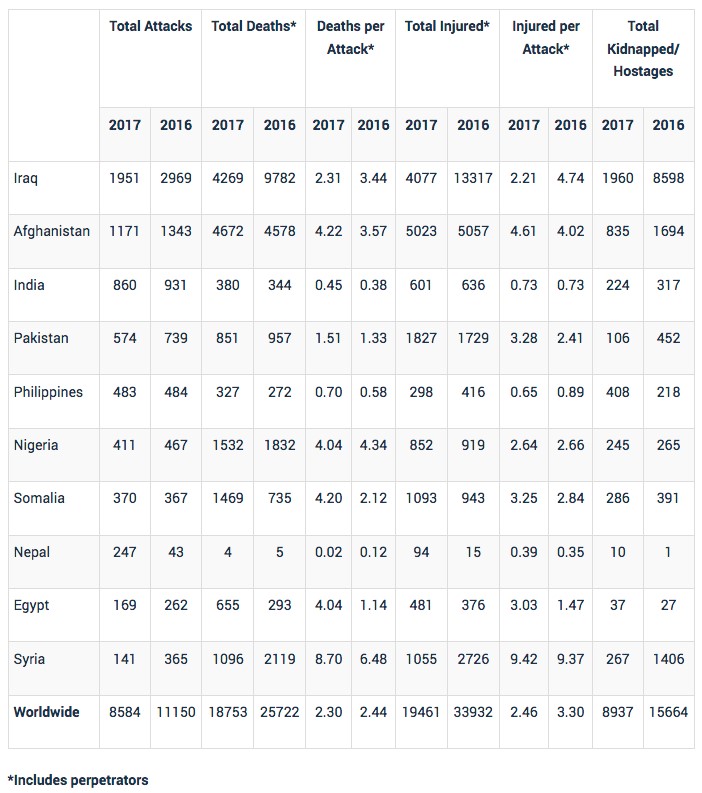 Figure Three: Five Perpetrator Groups with the Most Attacks Worldwide, 2017 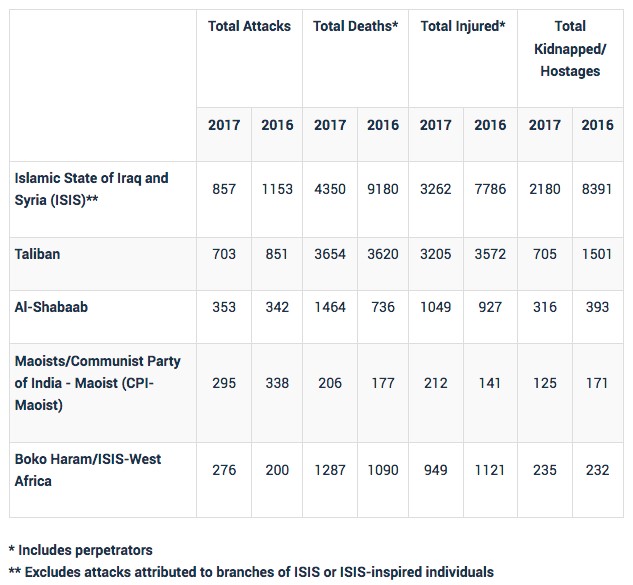 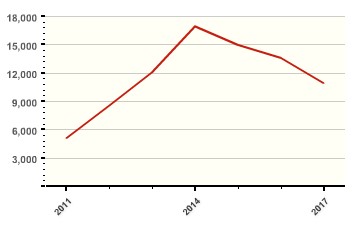 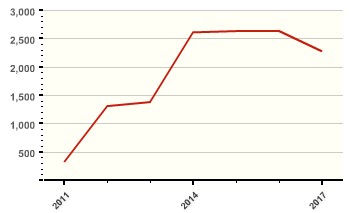