Security Implications of China’s Military Presence in the Indian Ocean

China’s military forays into the Indian Ocean have triggered a series of warnings. The term “string of pearls” was first used to refer to Chinese basing access in the Indian Ocean by a 2004 report for the U.S. Department of Defense. That report suggested China’s growing regional presence could “deter the potential disruption of its energy supplies from potential threats, including the U.S. Navy, especially in the case of a conflict with Taiwan.” Other scholars have warned that Beijing seeks to “dominate” the Indian Ocean region. Others suggest that the Chinese government is simply following its expanding trading interests and seeking to secure its supply lines against disruption.

China’s increased military presence in the Indian Ocean should not come as a surprise. China is following in the traditional path of other rising powers; it is expanding its military operations to match its interests abroad. The Chinese economy is highly reliant on trade routes that pass through the Indian Ocean, which serves as a vital pathway, particularly for energy supplies. It is natural, therefore, for the Chinese government to seek to protect its interests along these sea lines of communication. Leaders in Beijing have reason to be concerned about multiple potential risks in the region, ranging from maritime piracy to the potential for the United States or India to disrupt Chinese supply lines if a conflict were to occur.

China’s efforts to project power in the Indian Ocean are nascent, but their outlines are becoming clear. To sustain military forces in the Indian Ocean region, China needs to have reliable access to facilities in key points around the region. China’s new military base in Djibouti provides a rudimentary power-projection base, which is bolstered by its access to ports in Bangladesh, Burma, Pakistan, and Sri Lanka. Although China is using its Belt and Road Initiative (BRI) to fund many of these projects, there is no question that the infrastructure is being created with dual-use purposes in mind.

How might China use these facilities in peacetime? The most likely Chinese strategy would be to rely on port facilities to refuel and resupply its naval vessels without having to come back to Chinese facilities in East Asia. In the years ahead, it would not be surprising to see the People’s Liberation Army (PLA) develop some rudimentary facilities in the region for conducting at least minor repairs. These types of activities would provide China with a greater ability to sustain forces in theater, thereby avoiding the costly and time-consuming practice of having to foray from distant ports in mainland China.

Learn More: How is China bolstering its military diplomatic relations? 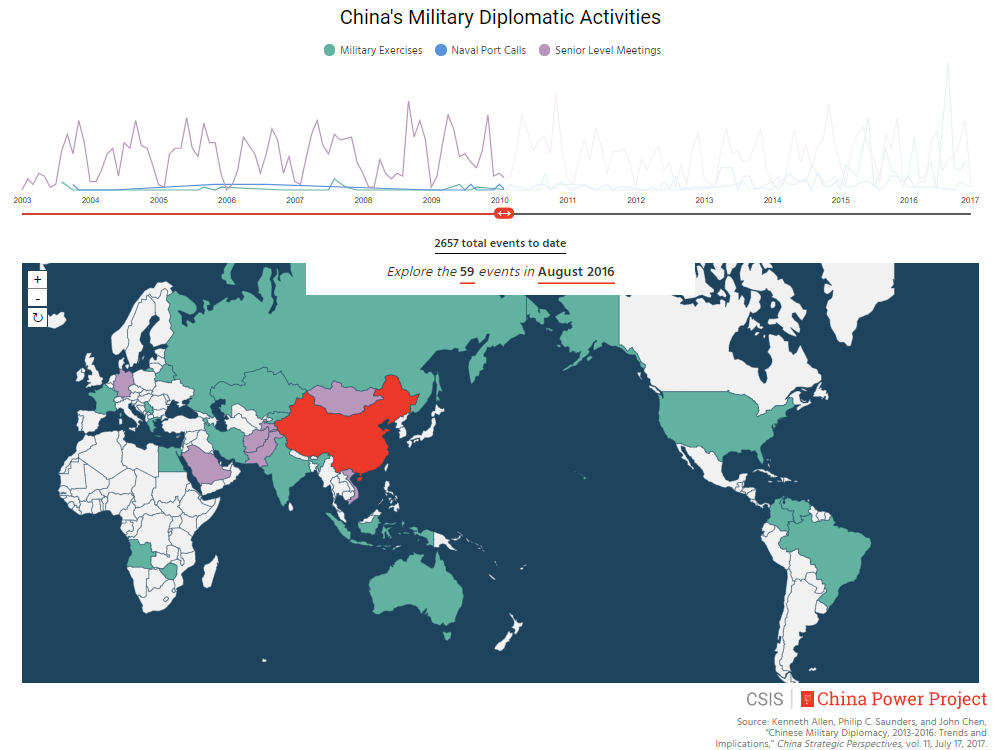 How might China use its forces in peacetime? In the near term, China will likely continue to conduct counter-piracy operations around the Horn of Africa. This serves multiple purposes. First, it gives Chinese forces practice conducting difficult operations at a great distance from the mainland. Such efforts are helpful for assessing shortcomings in the PLA’s ability to sustain power-projection forces far from China’s shores. Second, counter-piracy provides a window into the operational patterns of foreign militaries. This may be useful both from an intelligence-gathering perspective and for helping the PLA to compare its strengths and weaknesses to those of foreign militaries, including the United States, India, Japan, Australia, and others.

Chinese vessels may also conduct some more specific intelligence, surveillance, and reconnaissance missions to better understand regional militaries and gather data on the geographic area in and around the Indian Ocean. Mapping undersea features would be particularly beneficial in preparing for a potential wartime scenario. Such activities could help to provide information on the typical operating practices of potential challengers, to include the Indian Navy.

Although China’s presence in the Indian Ocean may permit it to increase its regional influence, Chinese facilities and forces would be highly vulnerable in a major conflict.

China may also seek to conduct training and exercises in the region, potentially in partnership with other militaries. Although Beijing is unlikely to find any highly capable partners in the region, it could work with less capable maritime states, such as Pakistan, to help them develop their maritime capabilities. This would also serve to expand the number of concerns for the Indian military, potentially stretching the Indian Navy. Such efforts could serve as a response to Indian efforts to build maritime capacity in Southeast Asia with states such as Vietnam.

In short, Chinese operations in the Indian Ocean during peacetime are likely to resemble those of other great powers, including the United States. Protection of trade routes is likely to be the primary objective, but it will require substantial improvements in the PLA Navy’s ability to sustain forces at sea. A secondary objective will be to prepare for the possibility of a conflict, in which the Indian Ocean might be an area of conflict, which is discussed in greater detail below.

While peacetime operations in the Indian Ocean provide many opportunities for the PLA to expand its reach and capabilities, any substantial Chinese military presence in the Indian Ocean would be highly vulnerable in wartime. The PLA would find it exceedingly difficult to protect its trade routes, bases, and ships if a contingency were to occur involving either India or the United States (or potentially both at once).

Chinese trade routes would be particularly vulnerable because the sea lines of communication from the Middle East to China run near the Indian coast for much of their journey. Without a substantial naval presence, China would be unable to protect these shipping routes. Although it might be possible to convoy forces, these convoys would probably have to avoid the Malacca Strait. After all, Indian facilities in the Andaman and Nicobar Islands are rapidly improving, which would make it difficult for Chinese forces to protect against aircraft or submarines in that area. In addition, U.S. facilities at Diego Garcia would pose another significant challenge.

CSIS experts discuss the months-long standoff between India and China over the Doklam plateau and explore how the lessons learned can be applied by other states facing Chinese coercion.

As a result, Chinese-bound shipping would likely have to divert from the Malacca Strait to the Sunda Strait, which would add significant time to transiting the Indian Ocean. Yet, this would also prove risky, as Australian facilities at Cocos and Christmas Islands are within range of these trade routes and could potentially be used by U.S. forces in a contingency. Therefore, if a conflict were severe enough that the United States or India were attempting to cut energy supplies to China, then Beijing would likely be forced to rely on its continental supply routes and its reserves for the duration of a conflict.

Furthermore, Chinese military vessels would be dependent on access to a limited number of bases. Just as the United States is vulnerable in East Asia because it relies on a few bases in the Pacific to project power, China would be vulnerable in the Indian Ocean. Yet, this would be a more severe challenge for the PLA, because China partners in the Indian Ocean region are far less capable than U.S. partners, such as Japan, in the Pacific. Simply getting sufficient munitions into the region could be problematic, preventing any Chinese forces from entering engagements past the first few days or weeks of a conflict.

China is following in the traditional path of other rising powers; it is expanding its military operations to match its interests abroad.

Some have warned that China might be able to sustain a carrier strike group in the region, which would certainly provide a substantial power-projection capability in a crisis. Yet, historical experience shows that carrier-based airpower is highly vulnerable to land-based aircraft, which have greater range and payload. As a result, it is unlikely that China would risk operating a carrier strike group in the Indian Ocean in a contingency. In a conflict with the United States, sailing such forces through the Malacca Strait would be extremely risky given U.S. undersea capabilities. Instead, these types of assets would probably be kept nearer to the Chinese coast or in the Western Pacific, where they could better protect against U.S. land-based airpower or quiet attack submarines.

What PLA forces would this leave in the Indian Ocean region? The most likely Chinese assets would be long-range surveillance aircraft in combination with submarines. These forces would be less vulnerable to attack than large surface ships. They might also provide China with a limited ability to hold at risk an adversary’s surface ships and commercial vessels in the region. The Chinese military might also keep smaller naval vessels, such as patrol ships or frigates, to help protect its military ports and bases. If substantial ground and air forces were based in the region, these forces would be forced to defend themselves independently if they came under attack. Regardless, Chinese supply lines from the Middle East would likely be under severe threat in a major contingency and its forces in the Indian Ocean would be isolated.

China’s activities in the Indian Ocean have attracted a great deal of interest in recent years. There is no doubt that Chinese engagement is changing regional security dynamics in the current peacetime environment. Beijing’s political, economic, and military influence is likely to expand in future years, triggering greater concern, particularly from Indian strategists. However, Chinese forces and facilities would be highly vulnerable if a major conflict were to break out.

Zack Cooper is senior fellow for Asian security at CSIS.