Three CSIS researchers traveled to the Venezuelan-Colombian border in February 2018 to assess the impact of the unprecedented Venezuelan humanitarian, economic, and security crisis.

Thousands of Venezuelans have fled to Colombia, straining the Colombian government's ability to police its 1,300 mile border. pic.twitter.com/5UVv98n7j8

Resembling a country at war, Venezuela is enduring an unprecedented man-made humanitarian crisis, causing a mass exodus of its people. Extreme food and medicine shortages, hyperinflation, rampant crime in every city, thousands of children dying of malnutrition, constant electric blackouts, looting, and repression have caused 1.2 million Venezuelans to flee the country over the past two years. Almost 90 percent of Venezuela’s population has dropped below the poverty line, and the middle class has virtually disappeared. Unable to eat more than one meal a day, the average Venezuelan has lost 24 pounds in the past year. Seeing people of all ages picking food out of trash has become a common sight on the streets of Venezuelan cities and towns.

The public health crisis is shocking. Secretary General Luis Almagro of the Organization of American States (OAS) said in a public address at CSIS in February 2018 that newborns in Syria have a better chance of survival than those born in Venezuela today. As malnourished people contract formerly eradicated diseases, they cannot turn to previously high-quality medical facilities. Pharmacies have a shortage of approximately 85 percent of drugs, and hospitals receive less than a tenth of the basic supplies and medicines they need to operate. The departure of vast numbers of skilled doctors and nurses has created a significant brain drain in Venezuela’s health sector. The medical professionals remaining in the country are working under extreme conditions, while their salaries are not enough to buy food for their own families. For a rising number of ill Venezuelans, the only hope of finding medical treatment is simply packing up and leaving the country.

Newborns in Syria have a better chance of survival than those born in Venezuela today. — Secretary General Luis Almagro, Organization of American States

The all but total collapse of the economy in Venezuela comes after a decade of historically high oil prices that served to mask deeply flawed macroeconomic policies. The International Monetary Fund is estimating 13,000 percent hyperinflation in 2018, and the gross domestic product has contracted by nearly 50 percent over the past four years. The oil industry, which represents 95 percent of Venezuela’s exports, is in full crisis mode—currently producing only 1.5 million barrels per day (a 30-year low). Meanwhile, Nicolás Maduro’s administration is running out of money as large debt payments loom: Venezuela owes over $7 billion for the rest of this year to international bond holders. Despite desperate attempts to receive unauthorized and unconstitutional external assistance (e.g., loans from China and Russia without approval by the elected national assembly), and the creation of a digital token “Petro” to avoid international sanctions, default is all but inevitable. In addition, enforcement actions against Venezuela, including seizures of oil-related assets abroad, are just a matter of time. 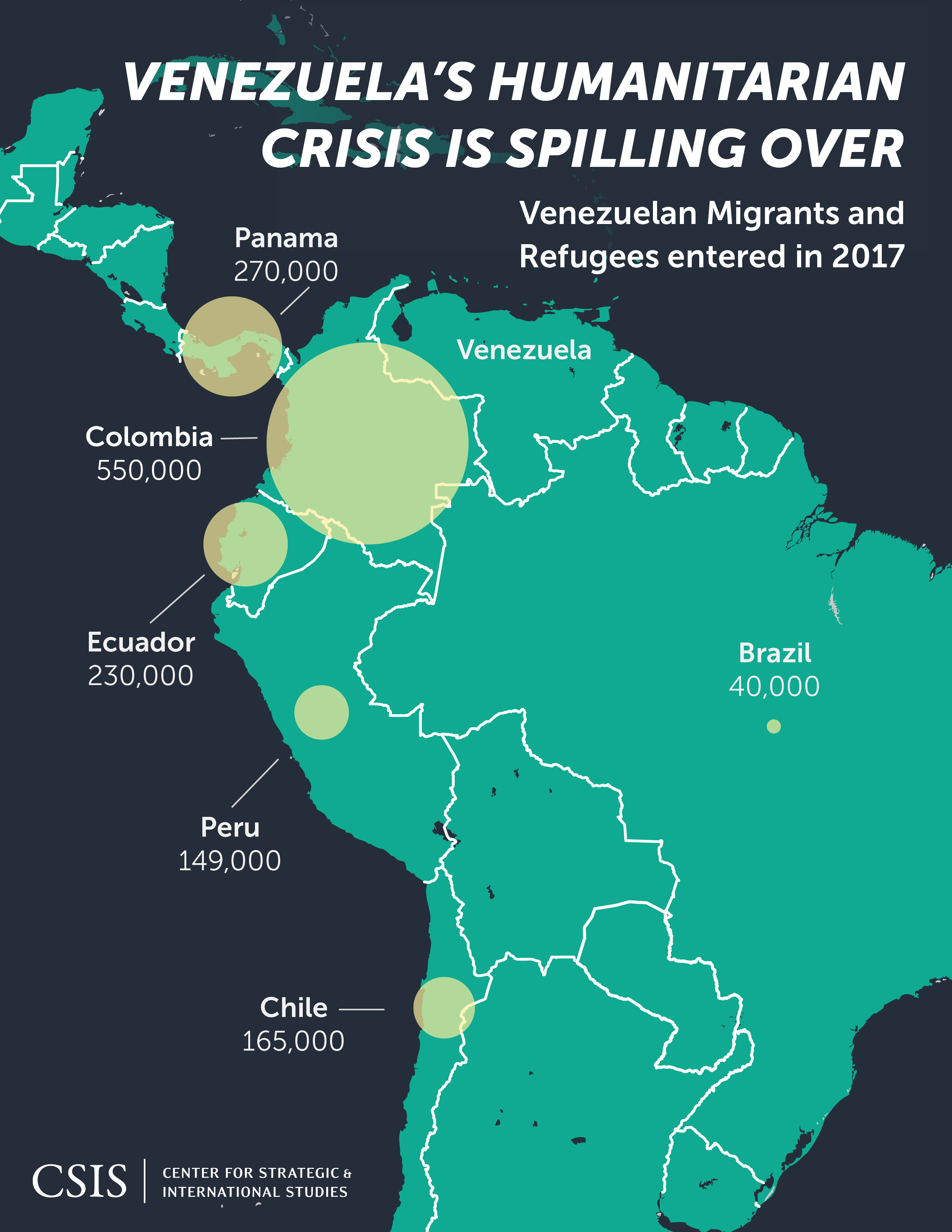 The UN High Commissioner for Refugees (UNHCR) has recently stated that nations receiving and/or already hosting Venezuelans should allow them access to their territory and adopt all protections they would provide to refugees. Neighboring Colombia has borne the brunt of the exodus with the daily influx hitting a high of 91,000 people early in February. Many of these individuals cross the border in a desperate search for food and medicine and then return to Venezuela. Many have no resources to purchase anything but are looking for humanitarian handouts. On the Simon Bolivar International Bridge in Cúcuta, which divides Colombia from Venezuela, people from all walks of life come together seeking to cross: desperately thin mothers carrying their malnourished children, seniors in wheelchairs hoping to see a doctor, and children crossing alone to gather basic goods for their families. Roughly 40 percent of those crossing are under 18 years of age. Voluntary responses over recent months in Cúcuta, such as those by Catholic Bishop Victor Ochoa, the Scalabrini International Migration Network, the Colombian Red Cross, the International Organization for Migration, and the Colombian government, are extraordinary and desperately needed but still insufficient.

The UN High Commissioner for Refugees has recently stated that nations receiving and/or already hosting Venezuelans should allow them access to their territory and adopt all protections they would provide to refugees.

Venezuela’s collapse is putting rising pressure on the Colombian national, regional, and municipal governments, particularly along the country’s 1,300-mile border with Venezuela. Although the two nations have a history of friendly and mutually supportive formal, informal, and family ties, the sudden appearance of large numbers of impoverished and desperate Venezuelans in local parks and streets has begun to generate some backlash. Invasion of public places by homeless Venezuelans not immunized against formerly eradicated diseases like measles and diphtheria has increased public health alarms. However, preventing people from crossing the border is not an option for Colombia, even if the authorities tighten the seven official border stations. Most people already sneak across the more than 280 informal trails crisscrossing the border. 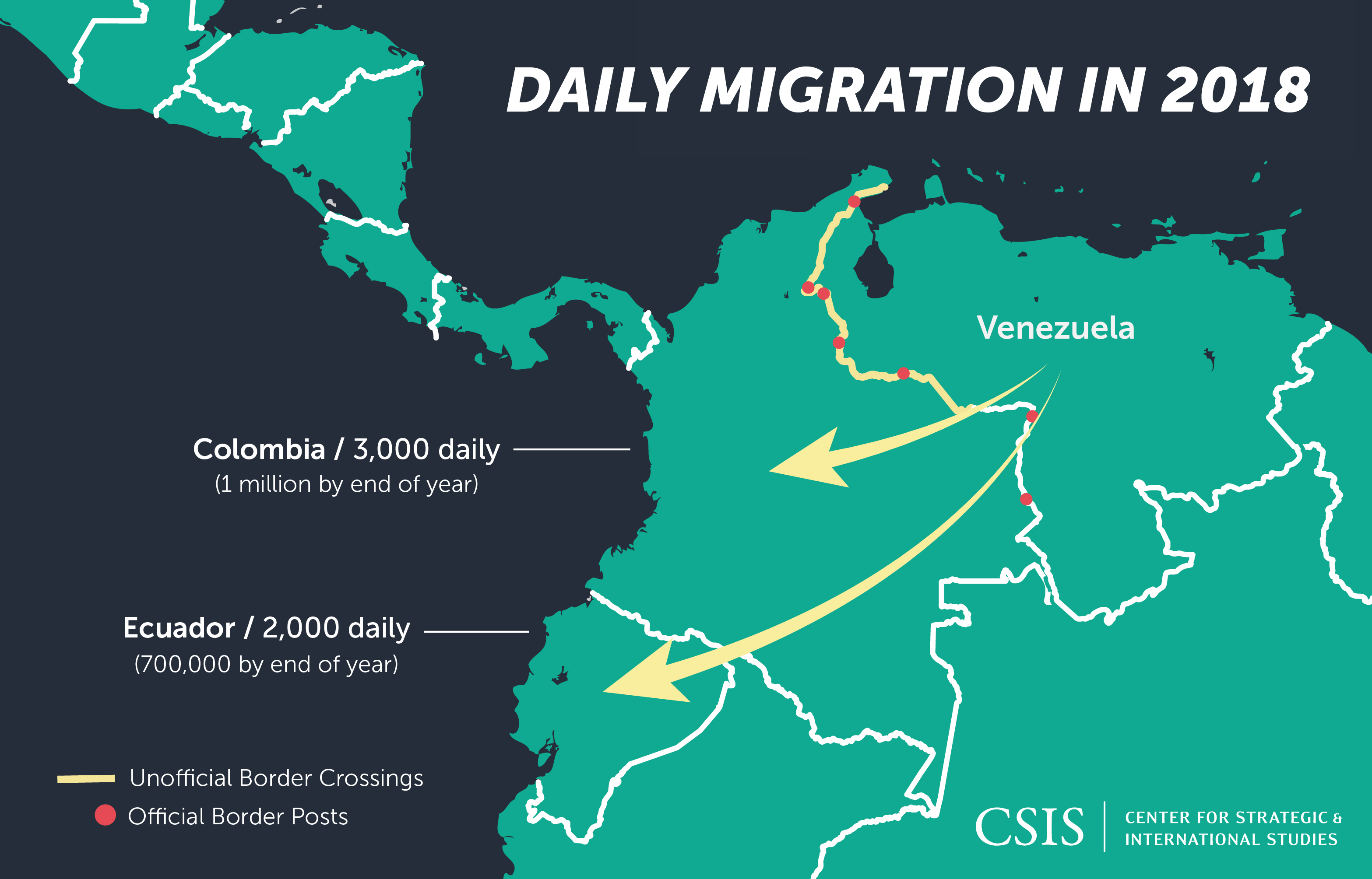 Of the 50,000 citizens who are crossing daily on average to Colombia to meet their basic needs, many also are fleeing with a clear fear of persecution. A Venezuelan woman responsible for cooking at one of the Cúcuta bishop’s eight emergency feeding centers said that her 22-year-old son had been shot by the Venezuelan national guard when he wouldn’t give them his delivery motorcycle. Protesting his death drew warnings from local authorities, and unable to support her two small grandchildren, she fled to Colombia with her daughter. The two now send money back to her daughter-in-law and grandchildren.

The Maduro regime is aware of the humanitarian crisis, but it has consistently refused offers of humanitarian aid from international organizations, neighboring countries, and the Catholic Church, claiming that these organizations are attempting an imperialist intervention. The Venezuelan people continue to protest the regime and flee their home country, but in the end, they must wait for support from the outside to bring humanitarian, economic, and political relief.

In this episode of 35 West, former President of Colombia Andres Pastrana and CSIS's Moises Rendon discuss how Venezuela’s crisis is affecting Colombia on humanitarian and security grounds.

The Role of the United States and the International Community

The United States, through the U.S. Agency for International Development, has recently provided its first commitment of $2.5 million in international assistance for Venezuelan refugees who have migrated to Colombia. While this is a much-needed and welcomed start, much more remains to be done. Assisting Colombia with technical and financial support to cope with an overwhelming flow of migrants and refugees, especially at its border, is urgent. The United States, Canada, the European Union, regional countries, multilateral institutions, and the global community need to organize joint efforts with civil society, the private sector, and Colombian public institutions in a rapid and comprehensive response to Colombian president Juan Manuel Santos’s recent appeal for support.

Next Steps: Addressing the Humanitarian Crisis in Venezuela and the Outflow of Migrants and Refugees

The United States should provide diplomatic and aid leadership to respond to Venezuela’s crisis. 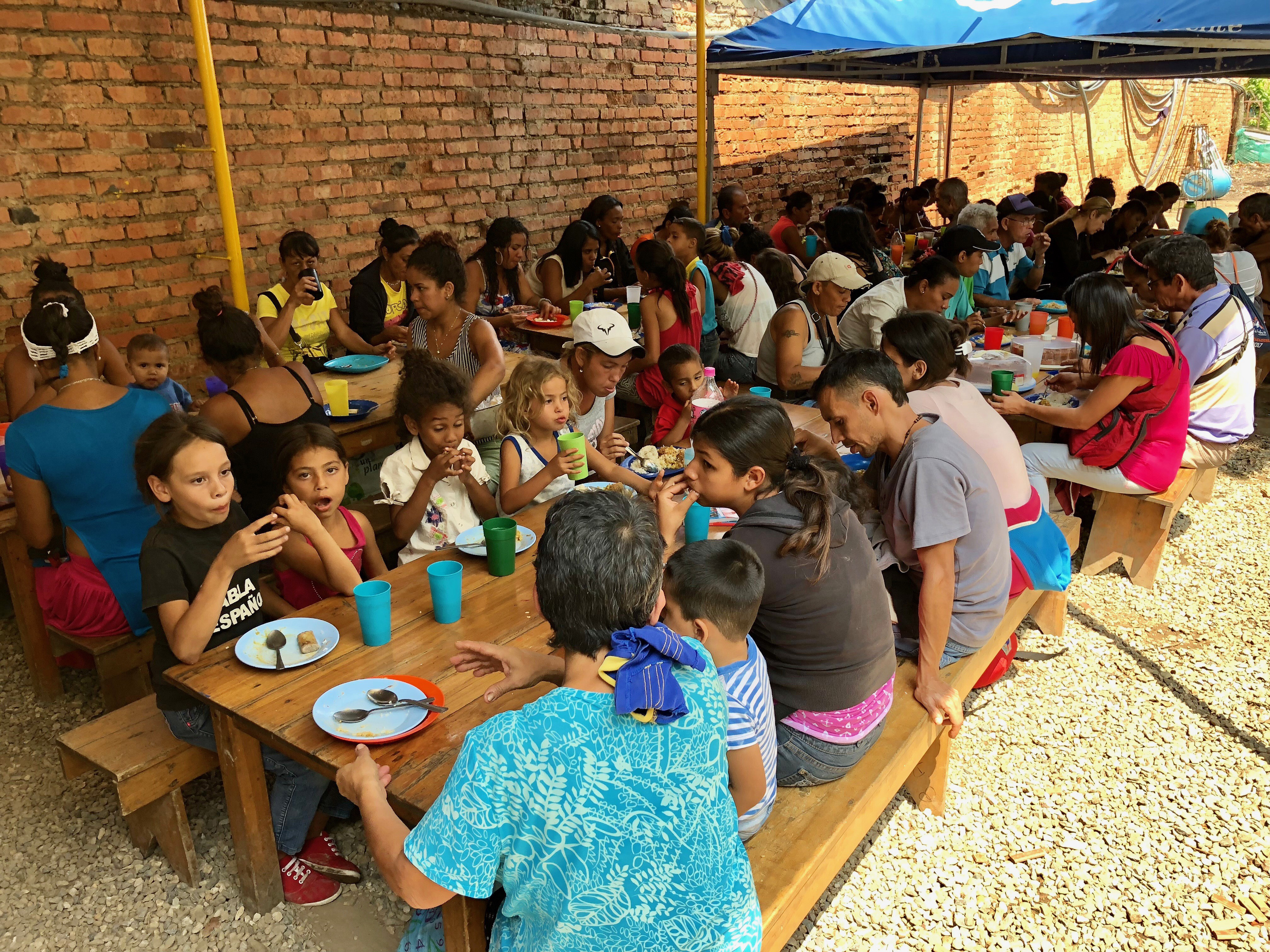 Venezuelan refugees and migrants eating at one of the meal distribution centers run by the Diocesis de Cúcuta. Photo: Moises Rendon/CSIS.

Implementing Blockchain and Digital Currencies to Facilitate Distribution of Aid

The humanitarian aid community should be encouraged to use innovative technology tools, such as blockchain, to facilitate transparent distribution of aid.

The root cause of the humanitarian crisis is clear: it is the result of the failed 19-year Chavismo experiment in “twenty-first century socialism.” The end result of the disastrous cocktail of policies, originally put forth by former president Hugo Chávez, has culminated in total economic and institutional collapse. No respite will come from the Venezuelan constitution, since Maduro has disregarded its provisions in his destruction of the rule of law and hand-picked a supreme court to ratify those actions. Maduro has completely consolidated power at all levels and branches of government, including with the illegitimate Constituent National Assembly, whose supposed objective was to redraft the constitution. The early national elections announced for this spring, under a regime-dominated electoral council, if held, will be neither free nor fair.

The international community needs to unify and act now to put sufficient pressure on the Maduro regime, forcing a transition that can bring humanitarian relief to the population and start a national reconstruction process. In the absence of international deterrence, the humanitarian crisis will continue to destroy lives inside Venezuela and spur millions more to flee the country.

Moises Rendon is an associate fellow and associate director of the Americas Program at the Center for Strategic and International Studies (CSIS) in Washington, D.C. Mark L. Schneider is a senior adviser with the CSIS Americas Program.