The CSIS Global Aging Initiative explores the long-term economic, social, and geopolitical implications of demographic trends in the United States and around the world.

The Global Aging Initiative (GAI) explores the long-term economic, social, and geopolitical implications of demographic change, and especially population aging, in the United States and around the world. CSIS established GAI in 1999 to raise awareness of global aging, to inform policymakers and the public about the challenges it poses, and to encourage timely and constructive reform.

Since then, GAI has pursued a wide-ranging research and educational agenda. This agenda, like the demographic transformation now sweeping the world, intersects with virtually every dimension of public and private life. How can aging societies maintain a decent standard of living for the old without imposing a crushing burden on the young? How will economic performance be affected as rates of savings and investment decline and workforces contract and gray? How will the changing structure of the family (which will often have more grandparents than grandchildren) affect the way we raise the young and care for the old? How will the rising average age of the population affect risk-taking, entrepreneurship, and voter and leadership behavior? Perhaps most fatefully, how is the differential impact of global aging, by country and by region, likely to transform the geopolitical landscape and the global balance of power?

While there are other policy institutes and academic centers that focus on various aspects of the aging challenge, none has GAI’s broad view, interdisciplinary scope, and global strategic perspective. To the extent that the work of these other institutes and centers is substantive, it tends to be narrowly academic; to the extent that it tries to communicate more broadly with policymakers and the public, it tends to be superficial. Quite simply, no one has GAI’s proven track record in translating incisive research into authoritative yet accessible policy analysis and recommendations.

As a result, GAI has become the leading voice on the challenge of global aging. Its publications have been widely cited in the national and international media, including The Economist, Financial Times, The New York Times, and The Wall Street Journal. Its experts have been invited to speak at dozens of international conferences on everything from retirement policy to defense policy. GAI’s path-breaking Global Aging Preparedness Index has been the focus of discussion and debate at roundtables organized by the European Commission, the OECD, and the World Bank. Following its Beijing release, China’s Long March to Retirement Reform, GAI’s report on China’s aging challenge, received coverage in every major Chinese general and business news publication. The Graying of the Great Powers, GAI’s investigation of the geopolitical implications of global aging, has been hailed by policy experts and academics as the most authoritative study on the subject—and become required reading in the international relations and security communities. 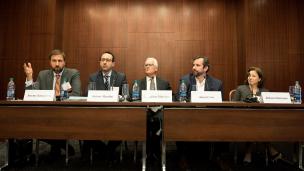 Global Security Forum 2015: The Human Crisis in Syria and Iraq: What Can be Done?
November 16, 2015
Commentary

The End of the One-Child Policy
October 29, 2015
Press Release

Global Aging Forum: The Impact of Demographic Change on Economic Growth and Old-Age Security in Asia
May 31, 2012
View all content associated with this program