Russia’s attacks across Ukraine’s agriculture sector and its theft of Ukrainian grain point to an intentional Russian effort to undermine Ukraine’s agricultural capacity. Prior to the war, Ukraine was one of the top exporters of wheat, corn, barley, and sunflower oil, with 400 million people relying on Ukraine’s exports for their food security. Russia’s war diminishes the country’s ability to produce the agricultural commodities that support food security within its own borders and worldwide. Satellite imagery from March and April and open-source evidence shows the impacts of these attacks on various types of agricultural infrastructure in Ukraine.

Satellite imagery acquired on April 15, 2022, and video evidence from March 31, 2022, suggest a deliberate attack on a major agricultural production facility: the Agromol dairy farm in Shestakove, a small agricultural village roughly 30 kilometers northeast of the city of Kharkiv. 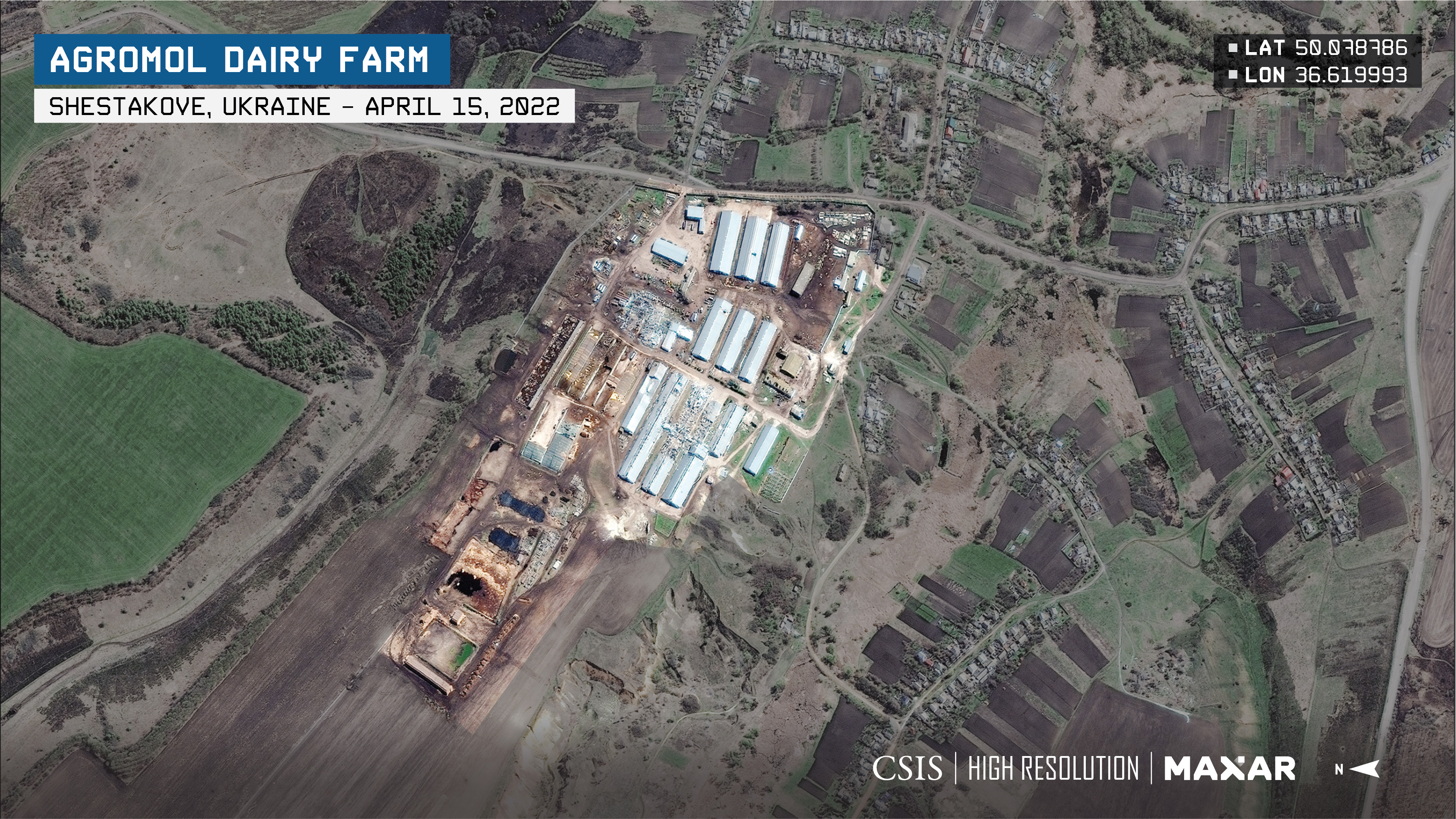 Located less than 30 miles from Russia’s border, Kharkiv is Ukraine’s second-largest city and has suffered some of the first attacks by Russian forces when the invasion began on February 24, 2022. The Agromol dairy farm is less than one mile from the T2104 highway, a major road leading directly into Kharkiv, and was reportedly attacked by Russian forces sometime on or about March 31, 2022.

High-resolution satellite imagery acquired on April 15, 2022, shows that six of the facility’s 20 larger livestock or poultry sheds suffered catastrophic damage, and an additional five sheds received significant damage. It is likely that many of the remaining buildings also suffered damage that is not readily visible. The nature of the damage observed and the lack of craters within the facility suggests, but is not conclusive of, a precision strike by small air-delivered munitions. Surrounding residential areas do not appear to have suffered damages, indicating that the farm was intentionally targeted by Russian forces. 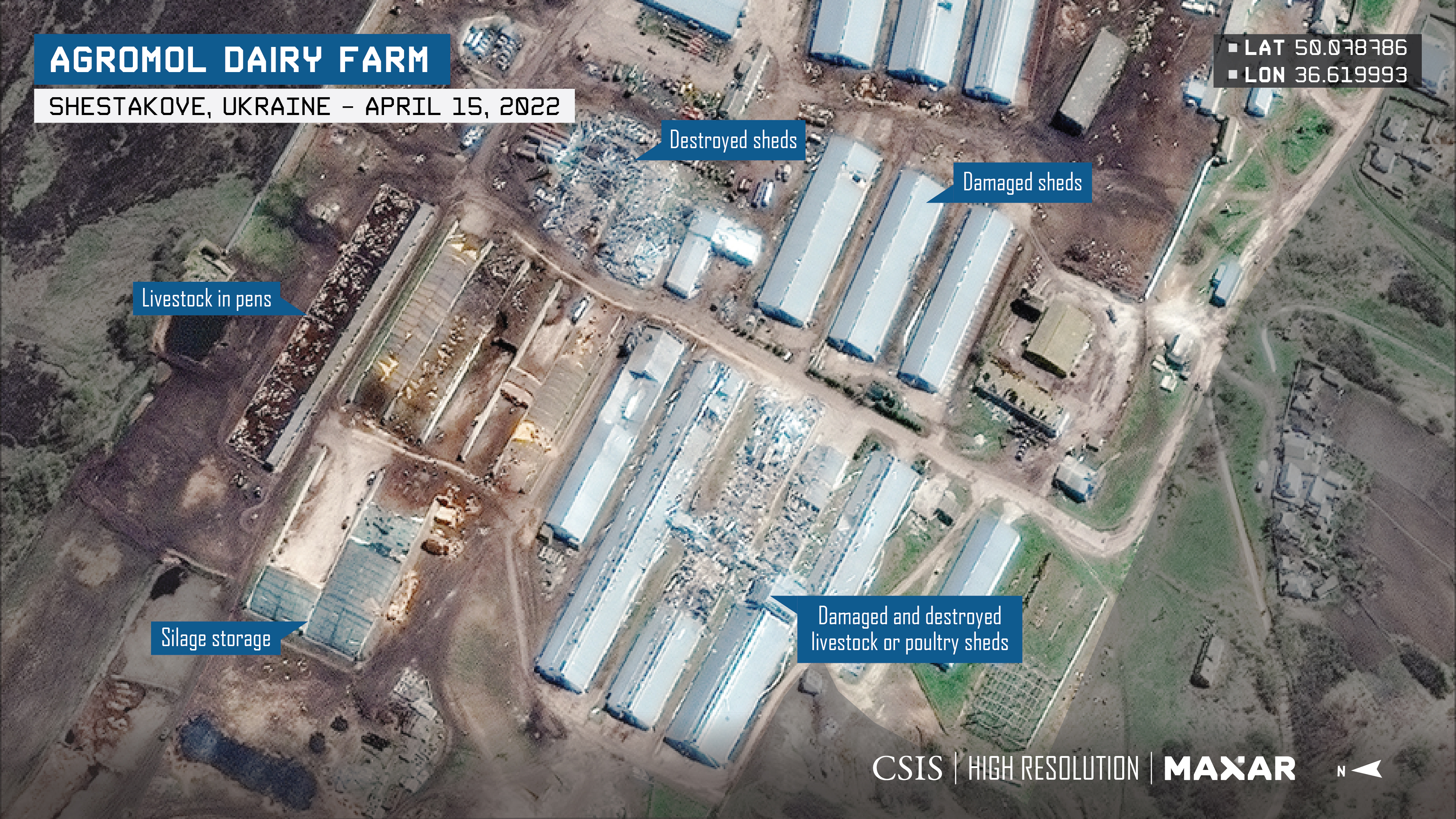 It appears that in Russia’s failed attempt to capture the city of Kharkiv, its forces targeted surrounding villages, which are located in one of the most agriculturally productive regions of the country. Given Russia’s use of hunger as a weapon against civilians in Mariupol and the direct route of transportation between Kharkiv and the Agromol dairy farm, it is possible that Russian forces targeted the farm to limit the availability of food to civilians in Kharkiv at they attempted to capture the city.

Previously a net exporter of dairy products, Ukraine became a net importer in 2019 as domestic raw milk resources shrank. The destruction of the Agromol dairy farm is a major setback to the farm’s parent company and one of the largest dairy producers in the Kharkiv oblast, the Kharkiv dairy plant. The livestock killed in this attack contributes to Ukraine’s declining dairy cow population and limited competitiveness in the global dairy market.

Across Ukraine, Russian troops are damaging croplands in their movement towards target cities and in their confrontations with Ukrainian defensive forces. 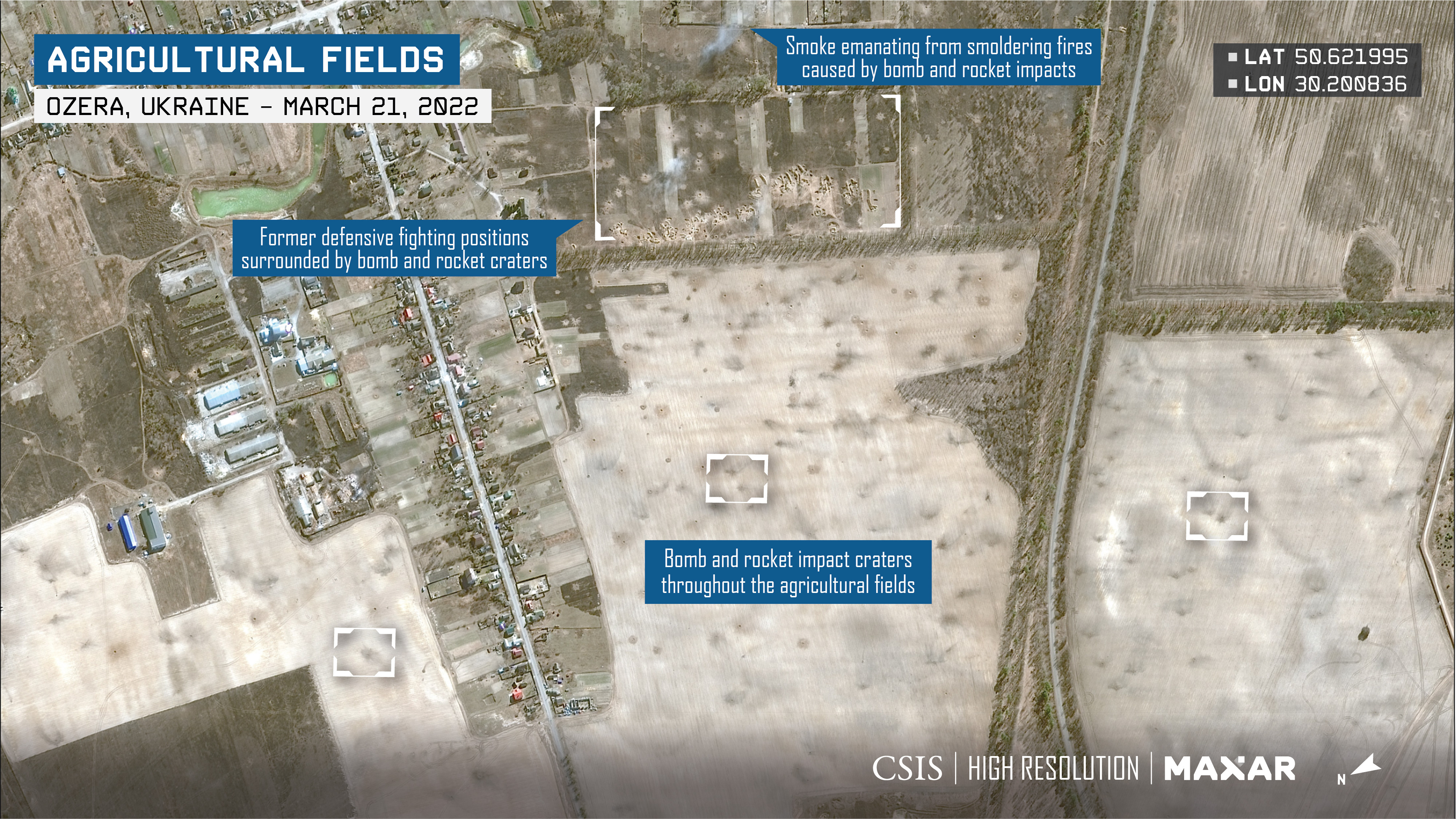 The target of these artillery attacks was apparently a small, recently constructed Ukrainian defensive fighting position with protective berms previously located in the eastern section of the fields. 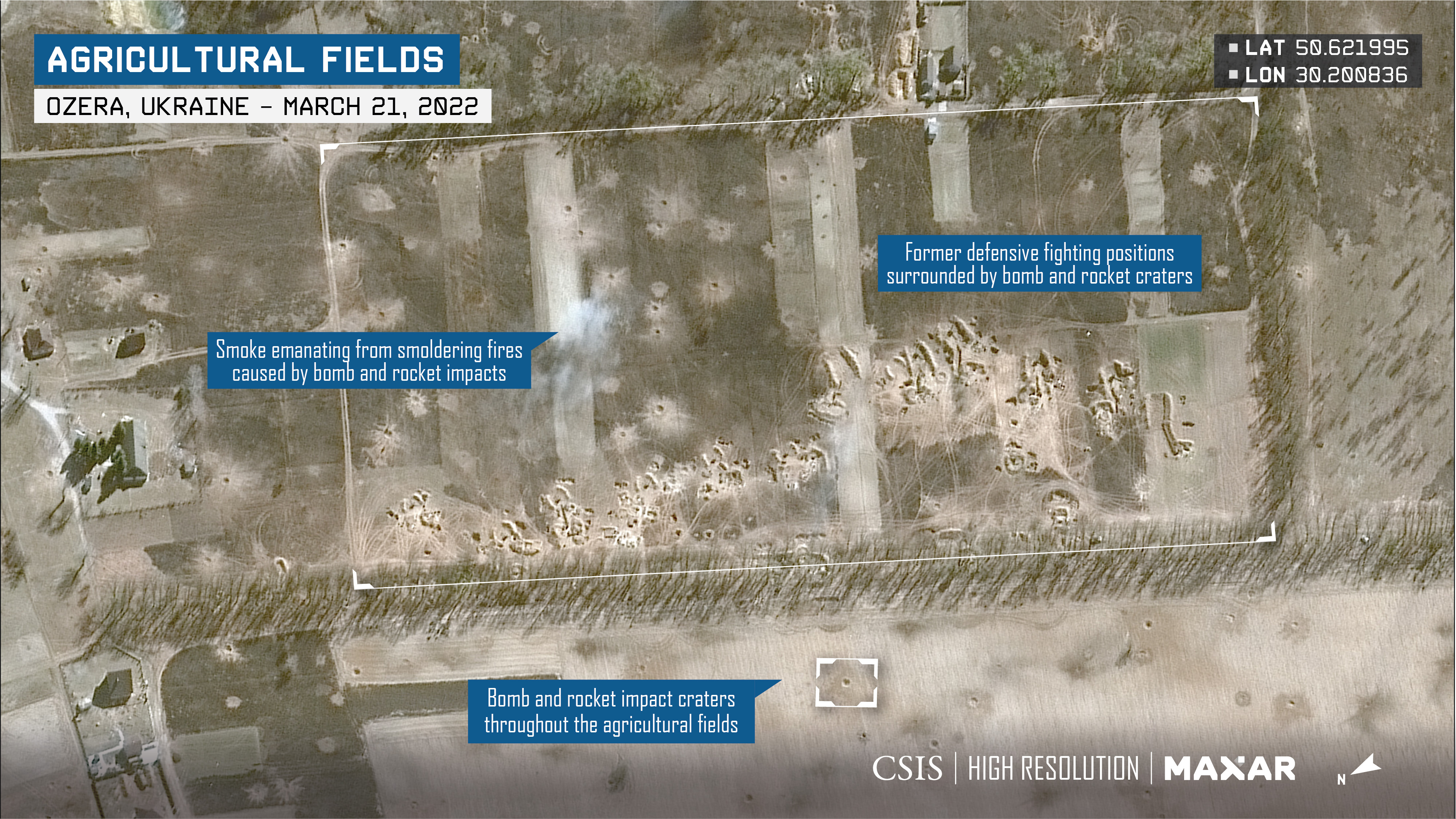 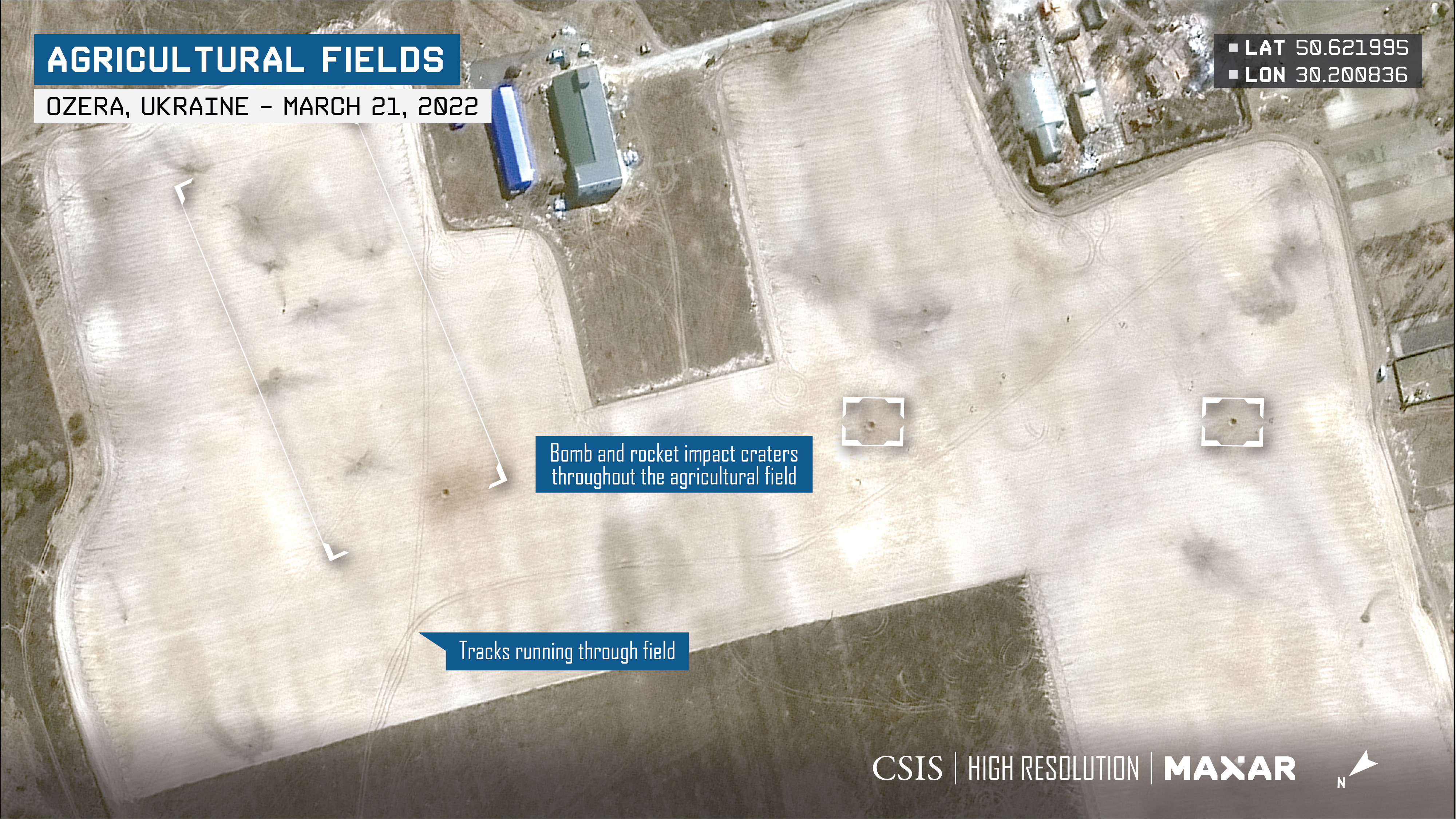 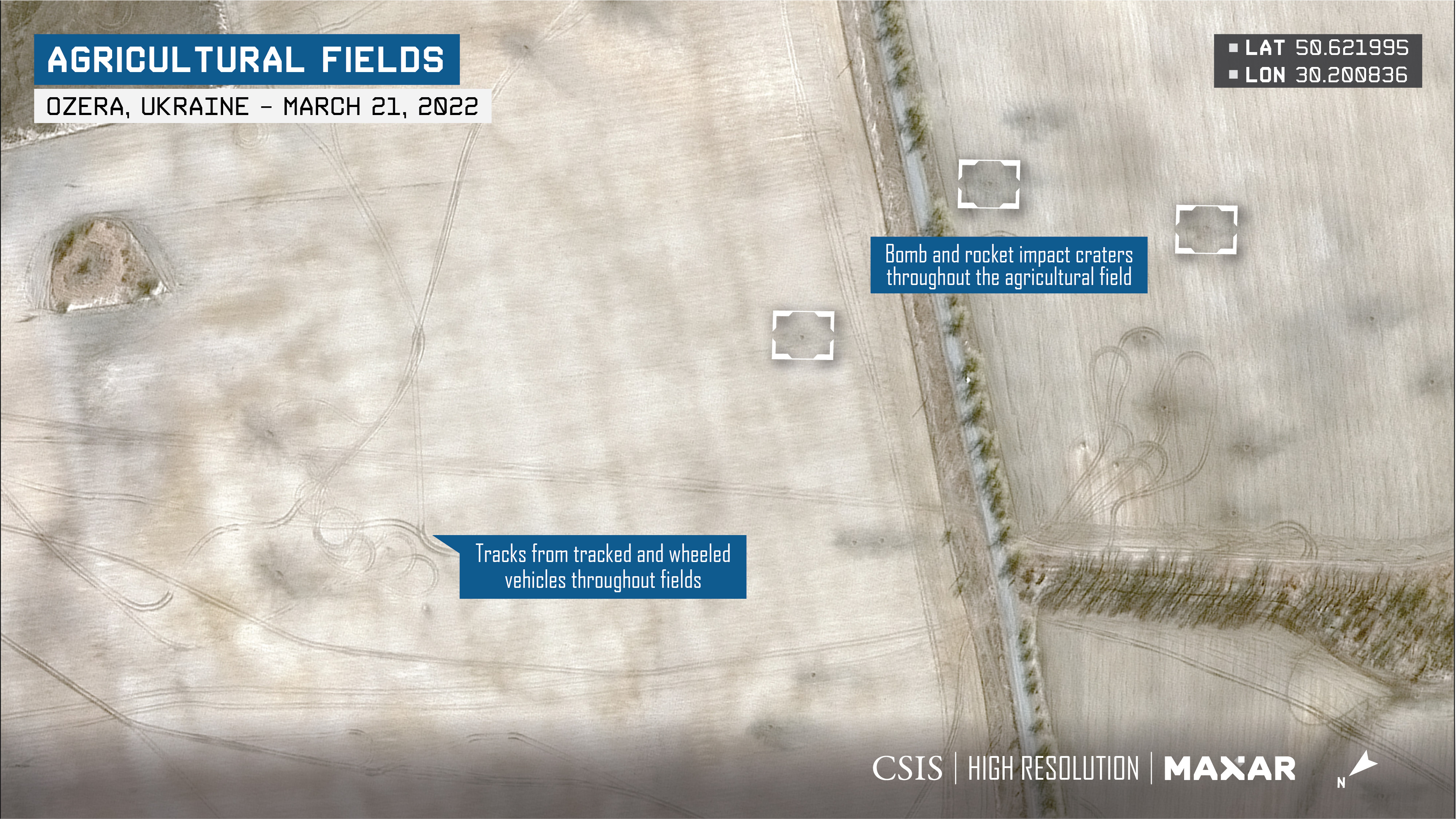 In an address to the Irish parliament, Ukraine's president Volodymyr Zelensky accused Russia of using hunger as a weapon and “a tool to dominate” Ukrainian civilians, saying that Russia is trying “to deliberately provoke a food crisis.” Although some attacks on Ukraine’s agriculture are unplanned casualties of the war, these attacks and others like it illustrate that, in direct violation of the Geneva Convention, Russia is using food as a weapon of war.