Afghanistan, Iraq, Syria, and Yemen: Is Decisive Force an Option?

The United States has now been continuously at war for more than a decade and a half, and still has not found a way to decisively win a conflict in a "failed state" where extremists are willing to use almost any level of force to achieve their objective. This is not a result of any failure in military capability in the sense of conventional war, but it is a critical failure to come to grips with irregular warfare, with the challenge of terrorism and religious extremism, and to link military action to the ability to create post-conflict stability.

The United States did demonstrate in 1991 that it could quickly win a conflict against a weaker conventional force in Iraq, but has struggled ever since to find ways to use decisive force against non-state actors, to deal with civil wars, and to bring deeply divided nations back to some form of stability. In the process, it has expanded from a war in Afghanistan that began in 2001 to invading Iraq in 2003, to a steadily wider a wide range of military operations in the Middle East, Africa, and South Asia.

The United States became involved in new military efforts to bring stability to Somalia in 2009, efforts that steadily escalated in 2016. The United States used force to help drive Qaddafi from power in Libya in 2011, and has since made episodic attempts to use force to achieve stability in Libya and to end ISIS's presence in that country.

The United States became involved a steadily escalating civil war in Syria in 2012, where U.S. efforts are now directed at ISIS in both Syria and Iraq, despite many continuing sources of tension and conflict. The United States first began active strikes against Al Qaeda in the Arabian Peninsula (AQAP) in 2009, and began to support Saudi Arabia and the UAE in their intervention in a growing civil war in Yemen in 2015. At the same time, it has steadily escalated its attempts to use force to check violent Islamist extremist movements in Sub-Saharan Africa.

The Burke Chair has published a new report on this topic called Afghanistan, Iraq, Syria, and Yemen: Is Decisive Force an Option?, which is available on the CSIS web site at: https://csis-website-prod.s3.amazonaws.com/s3fs-public/publication/170404_War_Use_Decisive_Force.pdf?365r7YdicB5HDUHnEox7c9M_4N5swDKh

So far, the United States has not been able to define any path toward reaching clear post-conflict objectives for any of these conflicts, much less to achieve decisive results. Its apparent victory in Afghanistan from 2001-2002 has become an enduring conflict linked closely to extremism and terrorism in Pakistan. Its near withdrawal from Iraq in 2011 has ended in supporting a major war against ISIS that involves troops in both Iraq and Syria, but where defeating ISIS as a "caliphate" does not offer any clear prospect of bringing lasting stability to either country.

The uncertain, and episodic U.S. military role in Libya, Somalia, and Yemen has scored tactical victories, but had a fleeting and secondary impact at best. Like Afghanistan, Iraq, and Syria, all three countries have seen a growing internal crisis, levels of violence and civilian casualties, growing problems with outside interference or new extremist movements, and seem locked into an indefinite process of protracted war.

The threshold of violence, and its cost to the civilian population, has risen in every country where the United States has intervened. The cumulative impact of years of war have also created growing strain on neighboring states, and the U.S. must now increasingly cope with interventions by other outside powers. These include the Russian intervention in Syria, and growing Russian ties to Iran. They include Turkish intervention in Iraq and Syria that is focused largely on its tensions with the Kurds. And, they include Iranian influence and its steadily expanding military role in the region—particularly in Lebanon, Syria, Iraq, and Yemen.

As of April 2017, the United States has not developed a clear strategy for bringing lasting stability to any of the countries where it is now fighting. Even when it may be able to inflict major defeats on a key opponent like ISIS, there is no guarantee that the end result will be any form of peace, or even that such a victory will significantly reduce the broader threat posed by terrorism and extremism. The United States not only seems locked into prolonged wars of attrition and locked into the support of host countries in the Middle East and South Asia that are the equivalent of failed states, but U.S. statistics on terrorism show a steady rise in the number of incidents and the number of areas where such threats exist.

The United States does face massive grand strategic challenges in achieving any form of lasting victory. It is fighting in failed states that have been destabilized and thrust into conflict by a host of factors beyond U.S. control. Failed governance, corruption, failed economic development, massive population growth and unemployment, deep internal divisions along ethnic and sectarian lines, and the rise of religious extremism in reaction to decades of failed secularism.

It also has been forced to meet new military challenges. These include the need to fight protracted low-level wars where massive numbers of civilians are constantly at risk. They include finding ways to fight that limit U.S. involvement and commitments to the limited strategic value of the objective and finding ways to enable the host country or allied non-state actors to fight most of their own battles. Most critically, they mean finding some way to help the states and movements the United States is supporting to create a favorable outcome in the form of lasting national stability or at least the absence of conflict.

From a military viewpoint, the key issue is whether the United States can credibly find a level of force—combined with broader efforts to bring stability—whose size and cost will both match the strategic value of the objective and offers a serious probability of lasting victory. In practice, the United States—and the Trump Administration—must find credible answers to three key questions the United States has so far failed to properly and honestly address in any of its current wars:

Here it must be stressed that tactical victories or gains against given movements are not a lasting form of victory. Containing and limiting the scale of conflict and instability may prove to be a necessary alternative to actual victory, but winning in grand strategic terms in any of the given ongoing wars, or in any of the growing number of limited U.S. military interventions, means ending a conflict on favorable terms that bring lasting stability.

At the same time, this analysis explores three different ways the United States and the Trump Administration may be able to make more decisive use of force—several of which have already shown that they can make an important difference: 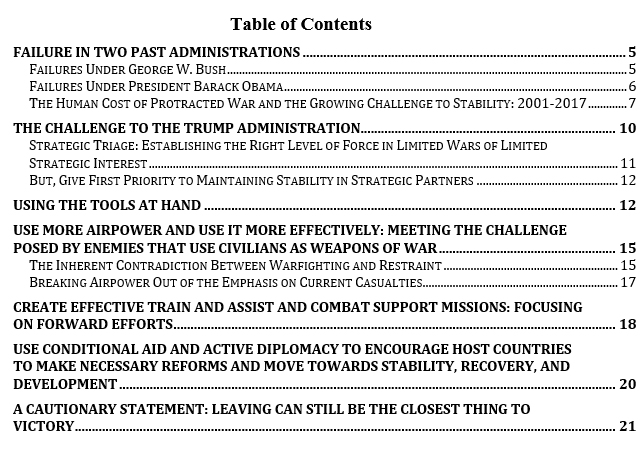