The Civil Half of the Afghan War

Dealing with the Political, Governance, Economics, Corruption, and Drug Threats

Every war has both a military and a civil dimension. This is especially true of counterinsurgency campaigns like Afghanistan, where the civil dimension is always a critical half of the battle. The U.S. now seems to be making real progress in reshaping its approach to fighting the military half of the war in Afghanistan, but it is far from clear that it is playing an effective role in helping Afghanistan deal with the critical problems it faces in dealing with the civil side of the war—the lack of security in civil life, chronic failures in governance, and massive economic challenges.

On the military side, the U.S. finally seems to be providing the levels of air support and train and assist personnel necessary to give the Afghan forces a fighting chance. It now is committed to providing the needed support long enough to allow Afghan National Security Forces (ANSF) to stand on their own. It has gained support from some of its NATO allies in enhancing the military advisory and support mission, and it seems committed to a conditions-based security strategy, rather than one with arbitrary deadlines for withdrawal.

What is far less clear is that the U.S. has an effective strategy to deal with the civil side of the war—the "hearts and minds" aspects necessary to win popular support for the government, to counter the Taliban and other threats at the local and provincial level, and to create the kind of support within the ANSF for the government that can win a counterinsurgency conflict (rather than attract recruits simply because no other jobs or sources of income are available).

A new report by the Burke Chair at CSIS examines the challenges presented by the civil dimension of the Afghan conflict. It is entitled The Civil Half of the War: Dealing with the Afghan Political, Governance, Economics, Corruption, and Drug Threat, and is available on the CSIS website at https://www.csis.org/analysis/civil-half-afghan-war.

Two sets of civil challenges are involved. One is the immediate set of political problems caused by a deeply divided government: President Ashraf Ghani and CEO Abdullah Abdullah lead alongside a thug – Vice President Abdul Rashid Dostom, over an ineffective parliament, and a mix of power brokers, warlords, and uncertain provincial and district leaders outside the capital at “Kabulstan.”

Leadership and political credibility are key short-term issues, as are elections. There are also serious questions about the real-world effectiveness and impact of yet another reform program, which seems better oriented to deal with Afghanistan’s international financial problems than the needs and loyalties of its people.

The second set of civil challenges consists of far deeper structural problems that affect the civil dimension of the war and that will take years to solve, affect any prospect for a stable peace and recovery, and have a major impact on the Afghan people. These challenges tend to receive only minimal attention at the policy level. However, it is far from clear that any counterinsurgency campaign can be won unless these challenges are addressed and the Afghan people at least become confident that their lives will improve in each area.

There are three key problem areas that shape the civil dimension of the Afghan conflict:


This analysis addresses each problem area in turn, and provides a wide range of indicators to show the seriousness of each problem and quantify the trends that now impact the war. It draws on a number of sources—most notably analysis by the World Bank, IMF, UN, and CIA—to address the seriousness of the structural pressures affecting the civil side of the war. It also draws heavily on an annual poll of Afghan public opinion by the Asia Foundation to examine Afghan popular perceptions of these problems and the correlation between them and Afghan "hearts and minds."

It should again be stressed that the analysis focuses on the underlying structural problems and trends involved, rather than Afghan politics; human rights issues like the role of women; the country's ethnic, sectarian, and tribal divisions; and the impact that Afghanistan's neighbors and other outside powers have on its civil life and economy. These too are critical aspects of the civil dimension of the war. They do not, however, lend themselves to the same degree of quantification and trend analysis. As a result, it should be clear that the need for effective U.S. and other outside aid in nation building is even more critical than this study indicates. 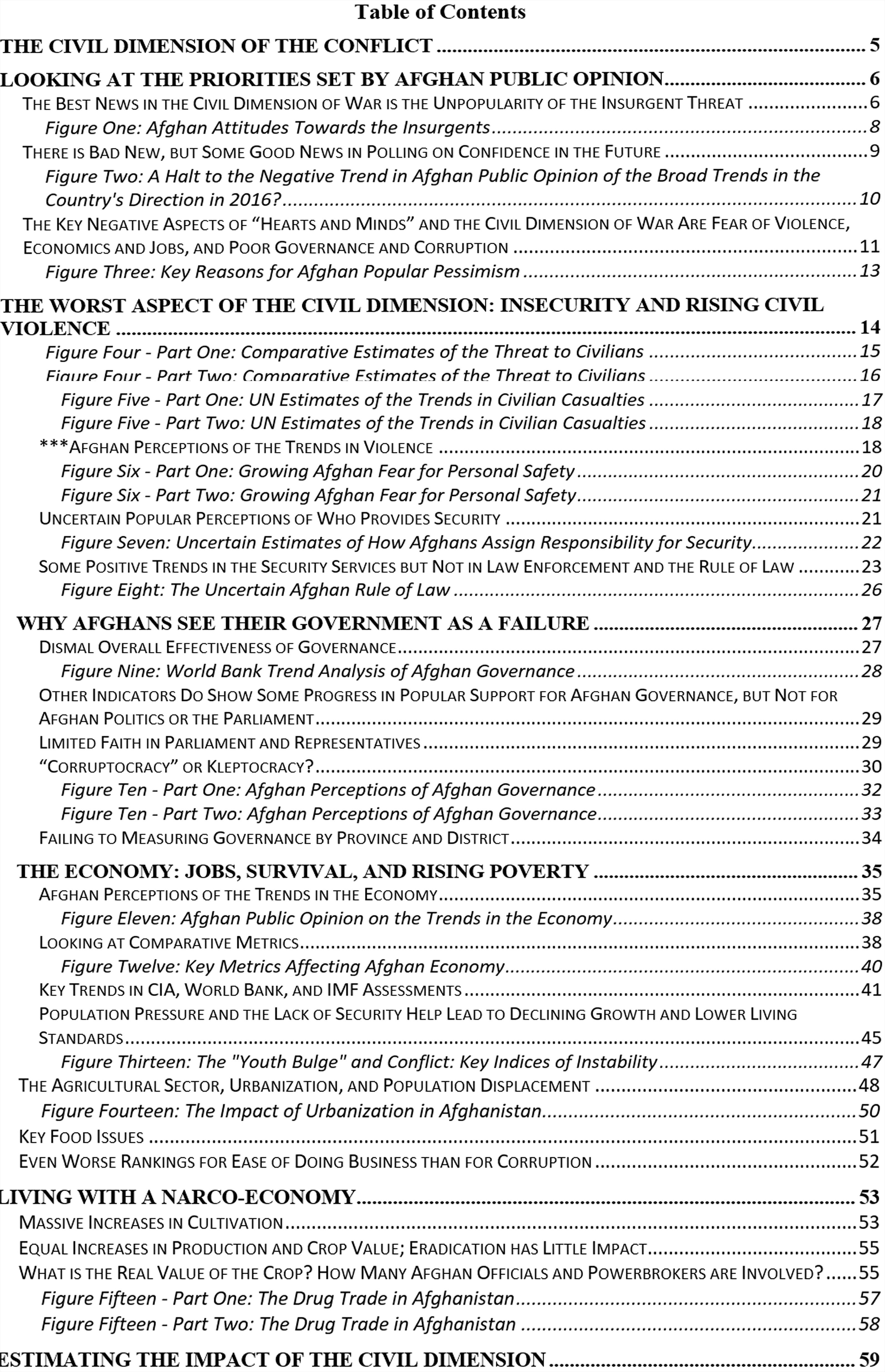 Other Burke Chair Studies of the Afghan War