Terrorism has become one of the dominating national security threats of the 21st century. It is also one of the most complex — mixing the actions of states, extremists, and other non-state actors in a wide range of threats and types of conflicts. Terrorists range from individuals carrying out scattered terrorist acts, to international terrorist networks of non-state actors, to state terrorism including the use of conventional forces and poison gas to terrorize portions of a civil population. Terrorism has also become a key aspect of civil war, insurgency/counterinsurgency, and asymmetric warfare, as well as ideological, ethnic, and religious warfare.

There is no easy way to categorize the resulting patterns of violence, to measure their rise, or to set national security priorities. For more than a decade, the U.S. has focused on the threat of terrorism in Afghanistan and Iraq, but it has dealt increasingly with the expansion of the threat into North Africa, other parts of the Middle East, Sub-Saharan Africa, and the rest of the world. Key warfighting threats like the Islamic State and its affiliates, and the Taliban and Haqqani Network, are only a comparatively small part of the rising threat in the Middle East and North Africa (MENA), Sub-Saharan Africa, and South Asia.

It is clear from the current trends in other regions that the threat of religious extremism may soon expand rapidly into the rest of Asia, and there are many other causes of terrorism in Africa, Europe, Latin America, the United States. Terrorism is often heavily driven by ideology, but it also is often a reaction to major shifts in population, ethnic and sectarian tensions, failed and corrupt governance, and the failure to broadly develop a given economy and offer employment and a future. No area is immune to the threat, and internal instability can drive terrorism anywhere in the world.

The Burke Chair at CSIS has made major revisions and updates to its graphic overview of these trends as of the end of 2016. It traces the patterns since 1970, and focuses on the period from 2011-2016 — the years since the sudden rise of massive political instability and extremism in the MENA region. It covers global, regional, and key national trends and compares different estimates and sources for 2015 and 2016.

The report draws primarily on reporting in the START database, but uses other reporting from sources like EU/Europol, IHS Jane's, and the IEP to illustrate different estimates, different perspectives, and the uncertainties in the data.

The full report is entitled Global Trends in Terrorism Through 2016, and is now available on the CSIS web site at https://csis-website-prod.s3.amazonaws.com/s3fs-public/publication/170828_global_terrorism_update_0.pdf?cGXk7lPZWBjWdjmuwfqQlOdr.MwyX5by.

A separate Executive Summary is also available which describes the key contents and conclusions of the report. It too is available on the CSIS web site at https://csis-website-prod.s3.amazonaws.com/s3fs-public/publication/170828_exec_summary_0.pdf?o8kn_MPl_a.I28khE4CdmsLpFzygXaSl.

The Contents of the Full Report

The full report shows key trends largely in graphic and metric form. It includes several hundred detailed maps, tables, and graphics. These data and metrics are organized according to the following table of contents: 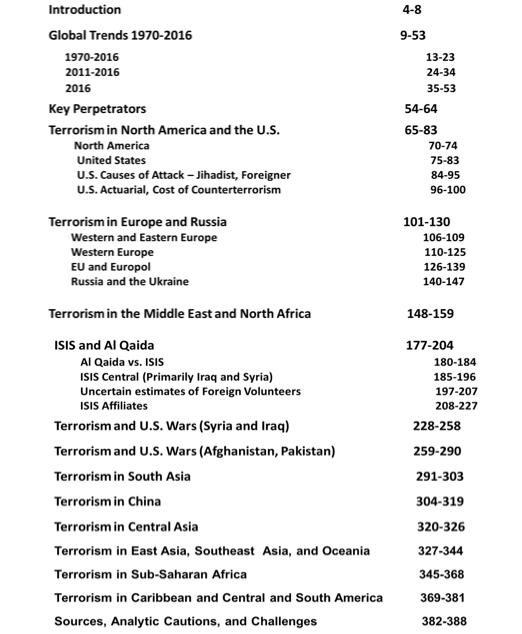 The report is necessarily complex. It does show that there is value in looking at global trends, but makes it clear that many key trends are largely regional, and must be examined on a regional basis. It also provides key country-by-country breaks out to show that the driving factors shaping the nature of terrorism in any given case are usually national. International networks certainly play a key role, as do factors like religion and culture, but the forms terrorism take normally differ sharply even between neighboring countries.

Key Uncertainties and Problems in the Data

The report also must be detailed to properly highlight the differences and uncertainties in much of the data. There often are sharp differences in the most basic summary data, even between two highly respected sources like START and IHS Jane's. These differences do not reflect failures in the analytic efforts of the sources shown. They reflect differences that are inevitable in their need to rely on open source material, the lack of any clear definition of terrorism, the problems in measuring and displaying uncertainty, and the need to guess and extrapolate where key data are missing.

It does not attempt to provide the supporting narrative that is critical to fully understanding these trends, nor to list all the many qualifications made by the sources used regarding the limits of their models and data. These are areas where the reader must consult the original sources directly — along with a wide range of narrative material and other sources — to fully understand the trends that are displayed.

The final section of the full report highlights these problems in more detail, but key problems I include:

The START database and the statistical annex to the State Department Country Reports on Terrorism do provide a long list of caveats about the definitions used and the uncertainties in the data, and that the START data offer three levels of confidence. These caveats are not reported in detail in the report to limit its length and the START data presented only show the high START estimate of terrorism and perpetrator threats.

Like the previous list of uncertainties, they reinforce another key conclusion that should be drawn from the full analysis. An accurate understanding of terrorism cannot be built up out of open source data. There is a clear need to find some way to bring the full resources of the U.S. government to bear on providing more accurate and reliable data in declassified form.

Another key conclusion is that analyses which ignore the gross levels of uncertainty and the conflicts in the information provided in the different sets of open source data now available, are likely to have little legitimacy and be more misleading than useful.